Star defender to miss out on Leinster decider 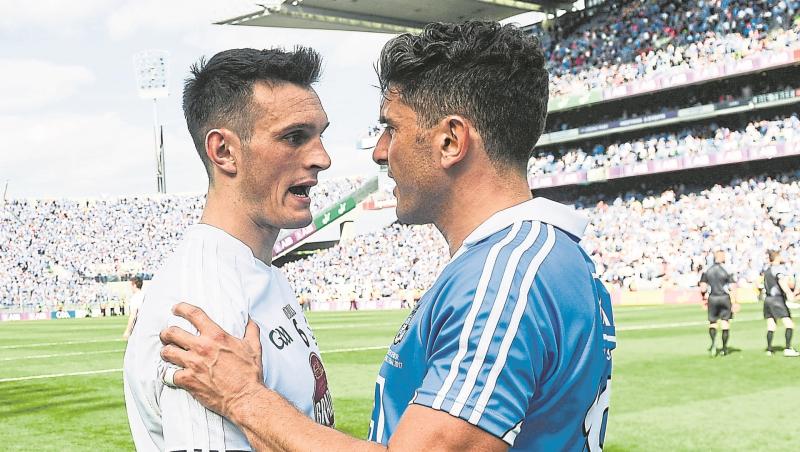 Friday, six o'clockish and the Kildare boys arrive at Manguard Plus COE, Hawkfield for another training session as they continue their preparation for Sunday's Leinster final battle with Dublin.
Eoin Doyle appears, looking strong, fit and ready for action.

However on this occasion what you see is not what you get, as the Naas man confirms following an injury picked up against Westmeath the scans have shown a Grade 2 hamstring, an injury that knocks you back from 6 to 8 weeks, pragmatic Eoin, though, takes in his stride (at least outwardly).
“I knew straight away it was gone; between 6 and 8 weeks, that seems to be what it takes unfortunately; it's not a muscle you can negotiate with.”
Eoin admitted, that sitting on the steps of Croke Park, with an ice pack on his leg “was nervous; very nervous but the lads pulled through and the lads that came on gave us fresh legs, plenty of youth and freshness around the middle but it was a great game to win, a tight game, not something we have done traditionally over the years but the more times you expose yourself to those type of games the better.”
Thinking ahead he says "I made a point during the week of how many times we have been in semi finals; quiet a few of them, and then when you meet the likes of the Dublins of this world and while they have been better (at times) no problem and hands up, and you do your best, but there have been times when we have been the better team; have been in front by five or six points but didn't win so the big thing was to get over this game (against Westmeath); get into the Leinster final."
It has indeed been a great season (to date); gaining promotion to the top division and now reaching a Leinster final, but that's not entirely the way the stout hearted defender sees it.
“Ye, getting promotion to Division 1 and now getting to the Leinster final is great but for me anyway, that does not define a successful season; winning a Leinster final would be different kettle of fish, but getting there certainly does not and I'm not saying that for any other reason; we got to the Leinster final in 2017 but we didn't win it and while it is great for the young lads being exposed to this level of football; hopefully they will realise that is where we should be, where Kildare should be playing; in Division 1 but we have to stay there; going up and down won't be any good; we need to be there year after year.
So what's different this time around, compared, say with last season, Jack O'Connor and his management team's first year with Kildare?
“I think the lads (management) have a better understanding of the players that they have; but back in 2016 we did not have a great year, Cian's (O'Neill) first year but in his second year the whole thing just gelled; these things take time; for now the togetherness around the place; players are taking a bit of stand, it has to come from us and you rely less on managing and systems and just go out and get the job done. That only comes from being together but the team this year and even last year; new faces; a lot of new faces but I suppose winning, you can't beat winning it builds confidence and belief, it all comes from winning games; there is no big secret to it; we got to the Leinster final in 2017 and we got promoted that year as well; it's no co-incidence, and while a good league does not guarantee a good championship it certainly helps with the confidence and the belief.”
And what of Dublin?
“I don't buy into the myth that Dublin are finished or the curve is flattening or anything like that; I think they took their eye off the ball in the second half when Meath got a bit of a run on them, so I believe that the Dublin we saw in the first half is the Dublin team we'll see on Sunday; it's going to be the fight of our lives but I am confident, of course I am, but we face a big task, we all know that but we have to come up with ways and strategies and preventing them from doing the damage that they do while making sure at the other end we do enough to win the game and not just to stay in the game; at the end of the day it's all about winning.
“I have heard so much since the day we beat Offaly that we have had a great year, getting promoted and getting to a Leinster final but getting to a Leinster final is of no use bar we win it; getting into a quarter final and a top eight would be defined as a good year but to my mind that is a very poor attitude to have; it's great getting to a final but getting there should not define the season; that's what winning will do.”