It's all or nothing on Sunday in final group game 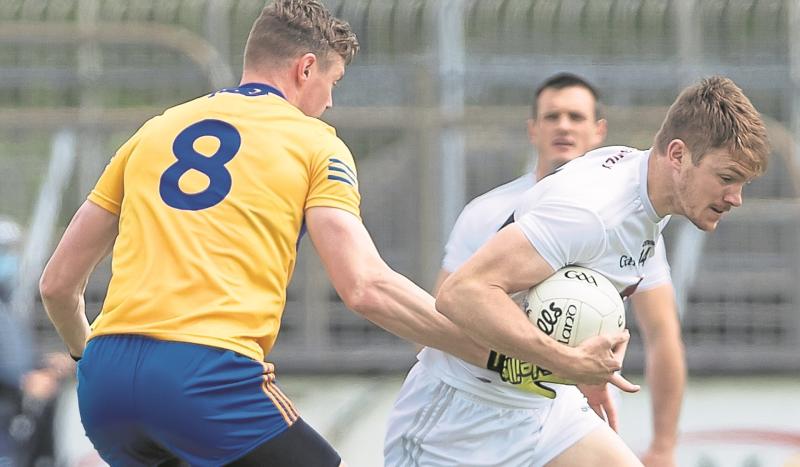 Early morning, Down Town Newbridge, Sunday, and the rain is beating down at a rate of knots. So
heavy in fact that one wondered if it could affect any of the big sporting events in the immediate locality.
Games such as the AFL at St Conleth's; the AHL at Hawkfield and the other, just a mile or so up the road, Day 2 of the Irish Guineas meeting at the Curragh.
Well whatever about any of those events, the poor early morning conditions certainly did not deter those shoppers who queued along the Main Street as they patiently waited for Penneys to open for trading.
Men, women and toddlers stood in line despite the rain getting more intense but the die hard shoppers refused steadfastly to budge, as I scratch me head in absolute bewilderment.
Further down the street and again the weather fails to deter a well-known local from a Sunday morning earner as he is spotted busy power-washing outside Johnson's, the popular local hostelry.
The rain continued to ‘bate’ down as ‘The Buck’ continued to shift any lose paint peelings outside the first suppin’ licensed premises one meets having crossed The Bridge from the Naas Road.
I wonder to myself had Catherine heard something about pubs re-opening that none of the rest of us had not; or was the premises just being prepared for a make-over prior to the official relaxations in, hopefully, a few weeks time?
Some two hours later and the powerwasher was packin’ up; the queues at Penneys, if anything had got longer while the word was all sporting fixtures in the locality were going ahead as planned.
A bit of early grub and down to St Conleth's Park as the players from Kildare and Clare were entering, once again, through the new main entrance at Bord Na Mona Headquarters.
The yellow bib brigade were in situ.

No shortage and that's for sure and while not exactly sure what they were stewarding, or who they were stewarding, but they were all there and ready for action if called upon, led by the one and only Johnny Goulding inside the ground while Noel Connolly and his able lieutenant, Tango, were on point duty in the outer circle.
By throw-in time the rain had abated, a blue sky appeared and while there was a stiff breeze blowing towards the town goal, nevertheless conditions were much improved on what the Penneys brigade and the 'powerwasher' experienced earlier in the morning.
Unlike the Cork game, The Lilies came out of the traps impressively, raising the first white flag of the day within 45 seconds and before a Clare hand even felt the weight of the ball.
And while the visitors soon leveled, it was Jack O'Connor's boys who looked the more adventurous, the more purposeful and the more likely to score.
And that they did with both Jimmy The Lark and the Neil Lad from Maynooth firing over and opening up a healthy three point early lead.
It was encouraging to say the least, as the three point advantage moved on to four as the Clare local radio boys were telling their listeners back home The Banner looked in trouble.
The visitors reduced the gap to three and that was how it stayed at the break but there were worrying signs from a Kildare point of view as they had failed to score for the final 16 or 17 minutes of the half; while Clare would have the benefit of a big breeze after the change of ends.
Once TG4 gave the all-clear off we went in the second half and Clare instantly showed their intent with a long range effort, just missing the inside of Mark Donnellan's right hand upright.
Kildare had showed some concern during the break bringing on two fresh men with Fergal Conway and Con Kavanagh promoted off the bench.
It was the Celbridge man who had the first crack of a score for The Lilies but his effort, as it did when introduced against Cork, fell short, into Stephen Ryan's grasp.
The Banner came with intent to the town goal and hesitancy in the home defence saw them carve out a great goal chance but Kealan Sexton inexplicitly missed the target.
It was a bargain offer that one of the Penneys shoppers would have spotted, and taken, at 40 paces.
Still when Darragh Kirwan, who was well held by the experienced Cillian Brennan, for once got away, twisted and turned, danced and jigged into space before firing over his only score of the game.
Back in front again by four, the Clare Radio boys were again voicing concerns to their listeners, but they need not have worried.
The Lilies were dealt a major blow, Eoin Doyle, who was solid as a rock, had to depart the scene with a leg problem, his opposite number, Eoin Cleary immediately made hay, yet mid-way through there was still just a green flag separating them.
But while the Kildare defence, as a whole, had been very solid, there was a growing frustration they were not winning any ball, any dirty ball that is, in the middle third. This is a situation that was also very visible down in Semple the previous Saturday against The Rebels.
Time and time again the ‘breaking’ ball was picked up by a player in blue and gold, it is a problem we have seen long before covid arrived and disrupted the world.
The Banner came forward and when Cathal O'Connor's attempted point suddenly dipped, it fell into the hands of substitute Joe McGann, in behind the Kildare defence, he gave Mark Donnellan no chance; the sides were level and suddenly the pendulum was with the visitors.
Cleary added another; 38-year-old Tubridy hit a beauty off his left peg and the writing was on the wall.
Cleary hammered another nail into the Kildare coffin and while Brian McLoughlin, just on, fired over followed by Jimmy The Lark adding another — the lead was down to the minimum.
A bit like waiting for the lotto numbers, there was still hope?
But not for long.
Clare, again winning the dirty, hard-gained possession, added two more; stretched their lead to three; packed their bags and headed back to Clem Ryan country with two precious points.
Exiting St Conleth's we noticed Penneys were still attracting the crowds while Catherine's early morning power washing job was well completed and now ready for the make-over.
As for Kildare?
A trip to Portlaoise next Sunday, nothing but a win will suffice and even at that, a helping hand may be required from an outside source.
I wonder if that power washer buachaill, aka ‘The Buck’ is doing anything; his ability to clean up in those awkward, hard-won areas could be a real plus, especially from one well known for getting out of tight corners!