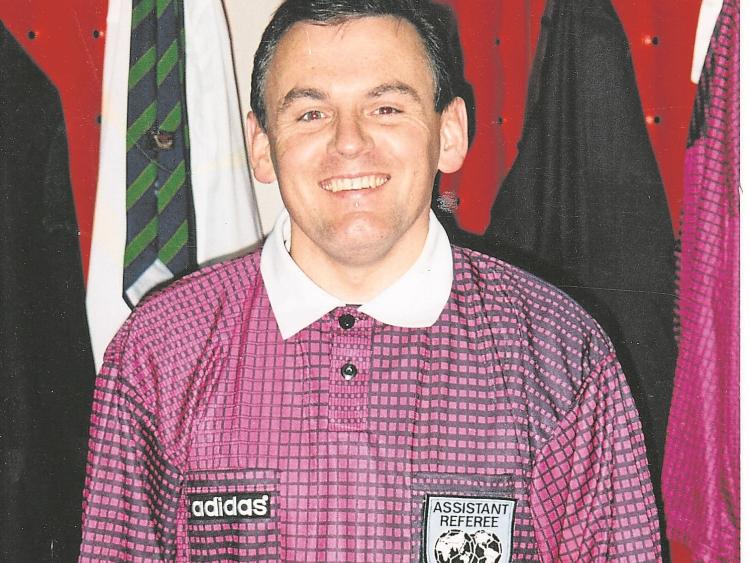 Another trip fondly remembered, but not for its football mind you, was one in Holland, Tilburg to be precise, a friendly game between Holland and Belgium.
On arrival we were met by the home officials who informed us the game was off, a frozen pitch, but as there were no flights back to Dublin we would have to stay over-night and fly home the following day. However, as JP explains, we had few complaints, a night being wined and dined in The Hilton made up for the disappointment of no game.
However soon after JP and his crew returned, Holland played China and with the likes of Overmars, Bercamp and that great Dutch team, that was certainly a night to remember.
“Brendan Shortt was the referee with myself and Willie Long his Assistants, a bit of the Long and Shortt of it; beautiful place though.”
A trip to Germany was also recalled at a time during the famous Beer Festival.”
We have probably all heard of the Munich Beer Festival but most of us never had the pleasure of experiencing it. However, JP insists it is something not to be missed” adding “as far as that goes anytime you can go to Germany is a real bonus.
“After that game we were brought to the Festival, absolutely incredibly, the crowds were enormous and the discipline of the people incredible, yet come 10.30 everything finishes, everyone goes home, not an ounce of trouble, incredible.”
While JP Kelly refereed the odd game here and there, mostly he was the Assistant, something he really enjoyed.
“When they made the move and introduced specialist Assistant Referees as they were called, I was more than happy, that was my career to all intents and purposes; got to see practically the whole of Europe; got to most of the top games back home, less pressure than actually refereeing, really good.”
JP says back then a League of Ireland clash between the big clubs on a Friday night in Dalymount of wherever was a night to savour. “Great crowds, real football, not like nowadays; tackles flying in left, right and centre and in fairness it was much easier back then to referee a game, unlike nowadays.
“Back then a referee had four disciplines when dealing with players: (1) you had a quiet word; (2) you dragged a fella out to le thim know you were angry with him; (3) a yellow card and (4) a red; four steps and you didn't skip any of them but if there was a red card then it was a red card but apart from that it was the four disciplines.
“You were allowed back then to use your man management skills but then the mandatory red and yellow cards were introduced and if you didn't flash them, well, you were taken down and reminded by the match assessor.”
JP maintains that nowadays a player could be off with one tackle but back in the day when the likes of Paul McGrath and Roy Keane were playing, them lads wouldn't last five minutes such is the way the game is refereed these days, quickly adding “probably rightly so, too many good players were destoryed by hatchet men.”
The highlight on the home front for the former Castle Villa man was probably the two FAI Cups he was involved in. In 1994 Derry v Sligo while disappointed not to have got the 2004 decider as age-wise it could have been his last game but 12 months later, 2005 JP was in his usual position running the line in the final between Drogheda and Cork, his final soccer game at League of Ireland level.
“That was a very emotional night” he recalls, “I remember after the game going over and waving up to my wife, mother, and other family members who were in the stand, but it was a great way to bring down the curtain on a career I enjoyed from the first day I took it up.”
Nowadays JP is a Referee's Observer, going to games, assessing, de-briefing those in charge after the game, writing up a report and sending it to headquarters.

There are three particular happenings that remain firmly in JP's mind from all the games he was involved in throughout his career.
One was a game between Italy and Ireland. That brilliant Italian player, Marcello Lippi was managing his country while Brian Kerr was manager of the boys in green.
At one stage Lippi came up to Kelly and said “excuse me sir, I would like to make a substitution.”
That approach, said JP, showed just how class that man was, sheer class; while at the same time, during the same game Brian Kerr roared down at the same official “JP, JP, will you tell that referee he is giving us fucking nothin.”
In a pre-season Friendly one season, Manchester United were playing Shelbourne, Roy Keane was the United skipper and before the game started JP approached Keane and told him “my da is a lifelong United fan and a great supporter of him (Keane); he (da) is far from well at the moment, I was wondering is there any chance you might give me the captain's arm-
band for him after the match; to which Keane replied “come to me after the game.”
However with five minutes left in the game, Keane was substituted, and handed over the armband and when JP went for it after the game, the “less than helpful kit man told him it was probably down in the bottom of the kit bin.”
I left it, went back to the dressing room only a few minutes later for Roy Keane and Alex Ferguson to come in. Roy said to me “we are staying in Finnstown House tonight, call in in the morning, tell security you are looking for me and I will have it” for you, while Alex Ferguson said “sorry to hear about your dad” and duly presented me with a Man U pennant, a Man U badge and a Man United tie for my da.
“My dad passed away soon after that and was waked wearing that United tie, I will never forget that.”
Taking a break at the minute from his role as Referees' Observer, he will return when covid has departed, JP Kelly can certainly look back with a huge amount of pride and satisfaction; an incredible journey, thoroughly enjoyed and still more to come.
One can only wonder how that career would have panned out all those years ago when JP turned up for his first introduction meeting to become a referee when asked was “ he not in the wrong room, are you sure it's not the disciplinary meeting you should be at”?
Brilliant!