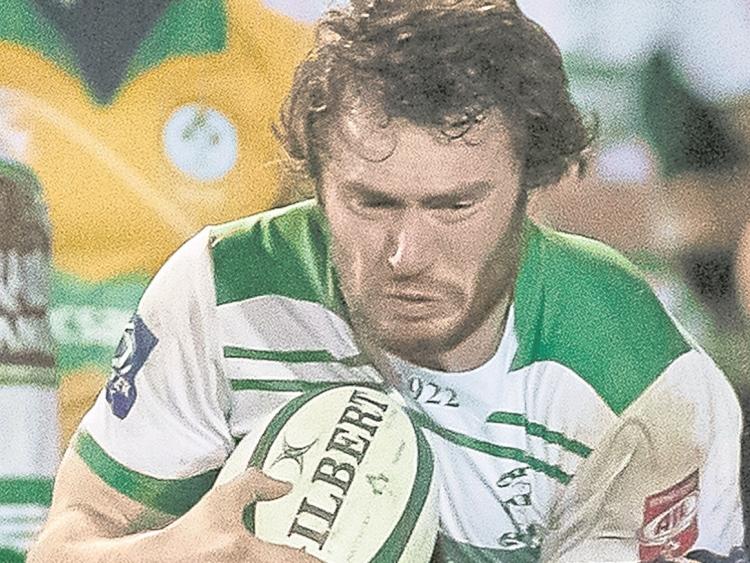 Naas returned to competitive action for the first time since last March when they entertained Terenure College in the Energia Leinster Community Series at Forenaughts last Saturday afternoon.
Obviously due to Covid restrictions the numbers present were small, but a live streaming of the game meant that supporters did not miss out, and those who tuned in were treated to a fine match, in which a very high standard of rugby was played.
Naas started well, dominating possession with good carries by Paulie Tolofua and Will O’Brien having their Dublin rivals on the back front. However they failed to convert their possession into points and Terenure made them pay for this with the opening score of the game after 32 minutes.
Some good off-loads saw the visitors take play up to the Naas ten metre line, and from there they attacked on the blind side. A fine reverse pass by Stephen O’Neill cut open the Naas defence and Matthew McGettrick sprinted through a gap to score under the posts. Conor Pender made no mistake with the simplest of conversions to give Terenure a seven point lead.
Within four minutes Naas were on level terms. Terenure won a scrum on their own 22 but an attempted clearance kick by Conor Pender was blocked down by Craig Ronaldson. The ball fell favourably for the Naas player who gathered it and held off an attempted tackle to score in the corner.
A superb kick from the sideline by Peter Osborne made it 7-7 and there was to be no further scoring for the remainder of the half.
Naas suffered a blow within four minutes of the restart when Fionn Higgins was somewhat harshly yellow carded for a high tackle by referee John Flynn. For the next ten minutes they were forced to defend, which they resolutely, limiting Terenure to just a couple of half chances. They survived this period with just 14 men without conceding, before Higgins returned and he was to have an immediate effect on the game.
On 58 minutes Terenure attempted their quick off loading game as they ran a ball out of defence. However Higgins was lurking and once he picked off one of these passes, there was to be no catching him and he sprinted clear to score under the posts. Peter Osborne tapped over the conversion and Naas led by 14-7.
On 66 minutes Naas were awarded a penalty for Terenure hands in a ruck and declined a long range shot at goal, kicking deep into their opponents 22. Ryan Casey secured the line-out and Naas set up a driving maul.
When this was stopped just short of the line the home side went through a couple of phases, before Tim Murphy and Bryan Croke quickly moved to the ball to the right wing out to Fionn Higgins who dived over for his second try. Peter Osborne was narrowly wide with his conversion attempt but Naas now led 19-7.
To their credit Terenure never stopped trying and in the closing stages they were rewarded when Conor McEvoy broke away from a driving maul to gain a consolation score for the visitors, but Naas saw out the remaining toime comfortably and were full value for their victory.
Naas pack played extremely well, with the front five extemely solid in the scrum, and Ryan Casey dominating the line-outs. Peter Osborne, Fionn Higgins and Bryan Croke are established members of the back-line and again enhanced their reputations here, but even more satisfying was the performances of the four players making their competitive debuts for Naas – Marcus Kiely, Craig Ronaldson, Sam Cahill and Tim Murphy. They slotted into the side with ease and are certainly great additions to the club.
Next up for Naas is an away fixture against Dublin University next Saturday afternooon.