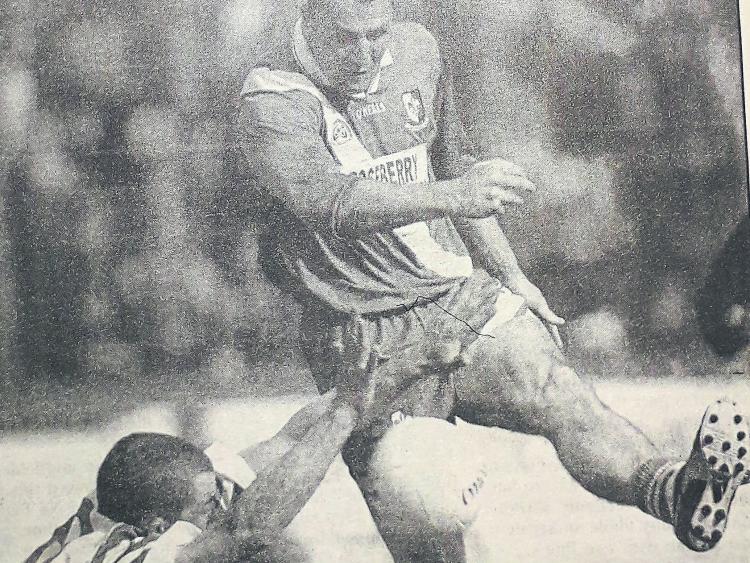 Moorefield lost their senior title on Sunday (October 16, 2001) in a game that proved to far to town rivals Sarsfields.
When The Moores needed to find a higher gear, to raise their game, there was nothing there
They scored just two points for the duration of the second half as they battle against the breeze and though they have spent a good deal of this year's championship digging out late victories against obviously inferior opposition, they could find no route past Sarsfields when they needed scores in the second half.
The wind was a significant factor but Sarsfields fared better against it than their opponents did and this was the deciding factor, not to mention the performance of Dermot Earley and Niall Buckley in the middle of the park.
It all started swimmingly for Moorefield, Michael Ryan and Ronan Sweeney had frees on either side of a score from play by Bernard Behan.
With less than five minutes played Moorefield bed 0-3 to no score.
This set the tone for the opening half and although Sarsfields played second fiddle for most of it, there were a couple of promising signs such as the amount of ball won by Earley and Buckley and, with the exception of Bernard Behan and Patrick Murray, they were keeping close tabs on most of the Moorefield forwards.
Buckley provided Earley with a dangerous looking ball for Sarsfields first score but Earley managed to avoid a severe impact as he just about collected the ball ahead of the Moorefield defence for their opening score.
After 12 minutes Moorefield led 0-4 to0-2 but were concerned enough about the Sarsfields attack to move Kenny Duane in on the threatening figure of Padraig Brennan midway through.
The game was tense and you sensed that if either team got a goal it would be deciding score and Sarsfields ha more green flag chances. Niall Buckley's effort, which was collected by Pauric Canavan was not strong enough and Stuart McKenzie-Smith opted to pull first time on a ball sent across the goal mouth to him.
It went wide. He probably didn't have much option to do anything because he had little room or time but Sarsfields were at least breaching Moorefield's defence.
Dermot Earley, now at centre forward in a switch with Buckley, replied with a Patrick Murray point but Murray scored again in the 28th and it was enough to give Moorefield at 0-6 to 0-4 interval lead.
There was little to report from Moorefield for the opening minutes. By the 35 Sarsfields had leveled for the first time thanks to a Padraig Brennan, a free and a score from play by Freaney.
Sarsfields looked a good deal m9ore comfortable and through Dermot Earley was restrained as he kicked a wide, he had the benefit of the advantage rule.
Moorefield's response to this was to introduce their first sub. Robbie Delaney came on; off went Brian McGrogan and with him went Moorefield's best chance of a goal. Bernard Behan, who with Patrick Murray was Moorefield's best forward, pointed from a tight angle to restored Moorefield's lead.
A few minutes later Dermot Earley had the game tied up after running 40 metres with the ball. was a fine individual score from the best player on the field, he scored three times, processed a lot of possession and worked hard in defence.
Moorefield never led again though they did level when Cian O'Neill pointed in the 45th after gathering a free taken by Ronan Sweeney.
It was Moorefield's last score but they were far from beaten.
Sarsfields' forwards were the more polished group though they recorded seven wides to Moorefield's two in the second half. Padraig Brennan gave them a 0-9 to 0-8 lead in the 48th minute and a full eleven minutes elapsed before John Whelan left Moorefield needing a goal when he scored. Whelan's was a brave effort especially after he had kicked a couple of wides before the Padraig Brennan batted the ball down into his path.
It was an example of some of Sarsfields best football in he second half. This score came from a Moorefield attack which was broke up by Dermot Earley, who also fielded a high ball to prevent a Moorefield point earlier in the half.
Sarsfields attack was much better contained than it was against Leixlip but at times they looked very dangerous.
Padraig Brennan was outstanding and so too was Freaney who must have gathered every ball sent into his corner. Tom Brennan struggled in the opening half but along with Niall Hedderman and Liam Sex had a fine game in the second half while Martin Dunne was superb at corner back.
Patrick Murray, Bernard Behan and Cian O'Neill did well for Moorefield up front but after the break they were not as impressive as the opposite forwards. Apart from giving one ball away, Martin Ryan did nothing wrong at full back through brother Michael faded a bit after a promising start. Kenny Duane and Patrick Behan worked hard to plus the leads which appeared wither greater frequency as the game progressed.
Sarsfields were the better side even if the outcome was in the balance until the end. It is worth remembering though that there is little between the sides - a goal in Moorefield's favour when they met in the 2000 quarter final and two points on this occasion.