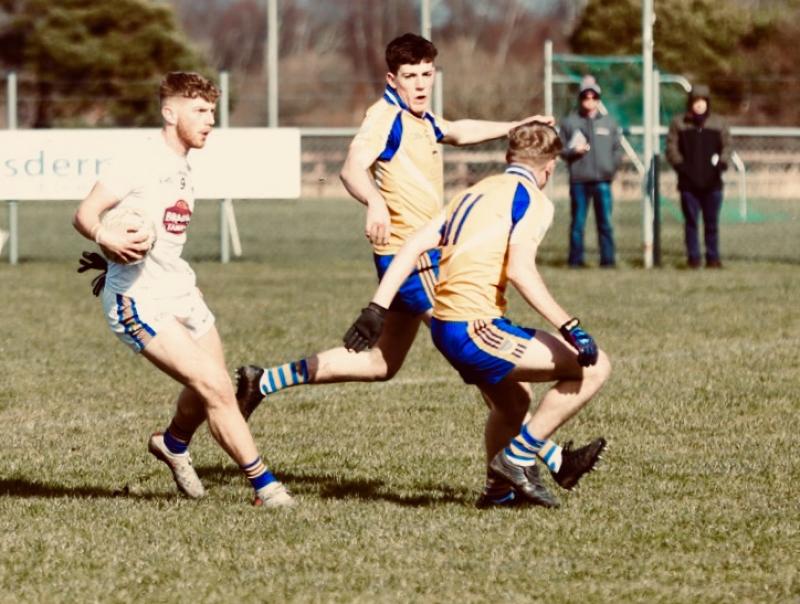 Naas CBS are through to their third Leinster PP School Senior 'A' final and on course to make it three Bro Bosco Cups in a row following their well deserved five point victory over Marist College, Athlone, in Coralstown, Kinnegad, this afternoon.

It was more of a workmanship display than anything too fancy but it certainly showed that the Co. Kildare boys can dig out a victory, without playing to the top of their game.

Paddy McDermott opened the scoring for Naas after three minutes but Marist hit back a minute later, despite playing against a strong wind they broke at pace and their ace marksman, Ben O'Carroll made no mistake from close range.

James Dalton hit back to reduce the deficit and with Drew Costello and Eoin Archbold getting a grip around the middle began to dominate.

Alex Beirne (free) had the teams level on 18 minutes and Naas then tacked on another four points from Simon Murphy, Alex Beirne, Seán McLoughlin and Sam Morrissey to go in at the break leading 0-7 to 1-0.

However with Marist having the strong wind on their back for the second half, it was certainly no plain sailing for the champions.

Mikey McGovern, just back from a long term injury, was introduced at the break as Naas opened the second half on the front foot and a brilliant long range point from Drew Costello showed their intent.

Ben O'Carroll converted a free for the Athlone boys but with ten minutes gone in the second half a long ball in from Costello saw Simon Murphy gain possession and he made no mistake to bury it in the Marist net to leave it 1-8 to 1-1.

Sam Morrissey increased the lead and Ben O'Carroll added a free on 48 minutes to leave it 1-9 to 1-2, with 48 minutes on the clock.

Marist did come into more in the second half but the Naas defence was strong in particular Mark Maguire, Conan Boran, Adam Malone and Paddy McDermott.

Alex Beirne increased the lead but two frees from the reliable Ben O'Carroll reduced the lead to six with six minutes remaining on the clock.

James Dalton added a white flag for Naas CBS and while Marist replied with two late O'Carroll frees, they never managed to put Naas under any real pressure as the champions went on to win on a final score line of Naas 1-11 Marist Alone 1-6.

Naas will now meet St Jospeh's Rochfordbridge in the final on Saturday week (March 14), Rochfordbridge having defeated Coláiste Eoin 2-11 to 2-9 the previous evening.

A remarkable achievement by Ronan Joyce's team as they bid to make it three senior 'A' titles on the trot.