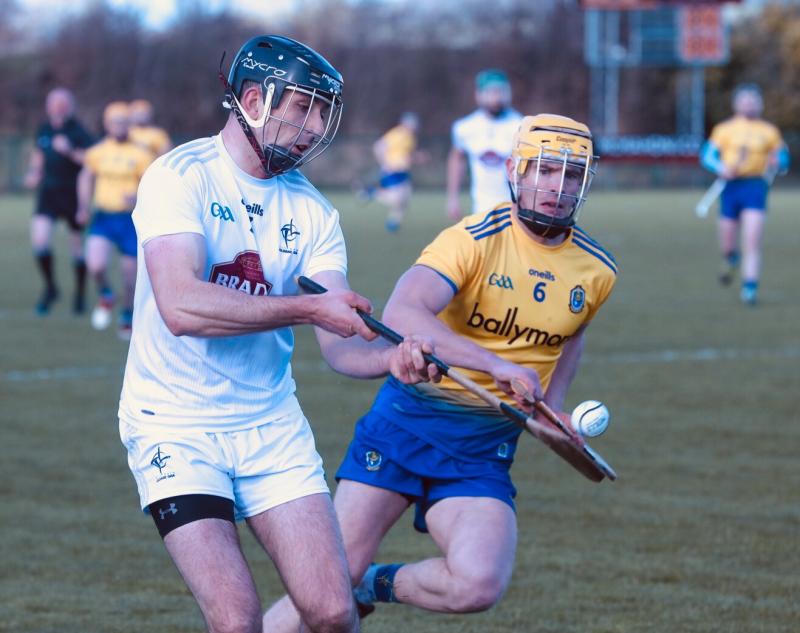 John Doran clears his lines in the AHL clash against Roscommon

Kildare won their third game in NHL 2B by defeating a Roscommon team that led by six points in the 10th minute in Hawkfield Centre of Excellence this afternoon.

Roscommon roared into the game, leading 2-2 to 0-2 in the hope of repeating their Christy Ring win in Athleague last year.

Playing with the wind, Mickey Joe Egan and Cillian Egan had goals in the net by 7th minute. Stemming from two mistakes, two Cathal Dolan frees had Roscommon in good stead.

Settling in their half-backline, Kildare responded, scoring 3-4 in seven minutes.

Beginning with a Conor Kielty goal in the 11th minute, Jack Sheridan, Brian Byrne, Paul Divilly and Cathal Dowling added to Sheridan and James Burke goals by the 18th minute.

Cillian Egan stemmed the rot, but the damage had been done. Byrne and Dolan traded frees for the remainder of the half until Sheridan’s 1-2 handed Kildare a 3-13 – 2-7 half-time lead.

Owing to the half-time margin, the fizz had gone out of the game in the second-half. Dolan and Byrne traded frees until Dowling and Divilly added points by 50th minute point.

Whilst the ten-point margin meant the result was safe, Roscommon found an upswing in form. Mickey Joe Egan and Dolan (0-10) added successive scores, while Naos Connaughton had a 21’ yard free defended off the line.

Kildare, however, withstood this mini-revival. Despite Peter Kellehan shoring-up the full-back position, late goals from Byrne (1-11) and Sheridan (2-4) put a gloss on a result that Kildare solidified in the first-half.