I love everything about Naas Racecourse: Ted Walsh 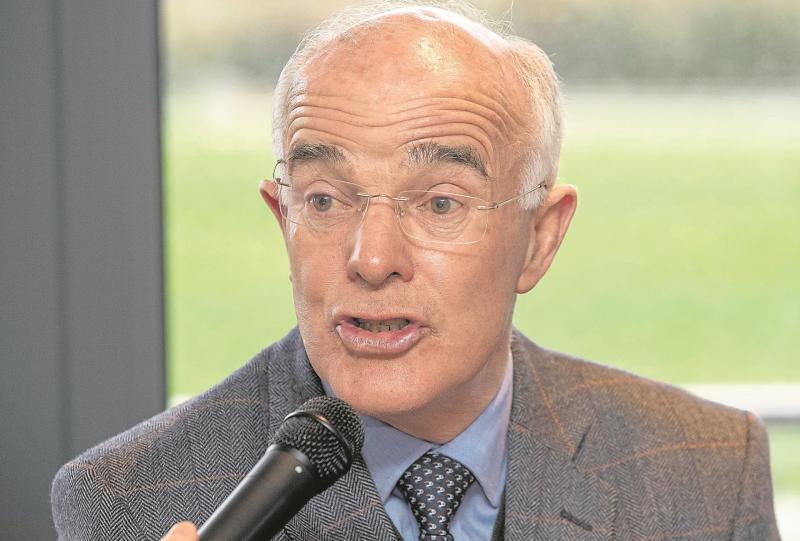 The esteem in which the track at Naas is held by the top trainers in the land was certainly in evidence at a press briefing lunch for the upcoming Lawlor's of Naas Grade 1 Novice Hurdle this Sunday.
While Gordon Elliott, Joseph O'Brien and Martin Brassil were fulsome in their praise for the facilities at Naas, trainer and racing commentator Ted Walsh certainly did not hold back on his thoughts on the Tipper Road venue.
The HRI Racecourse of the Year for 2019 didn't get to be a great track in the last month, said Walsh, “as far back as I can remember, 50-60 years, Naas was always a great track and the top trainers such as Vincent O'Brien and Paddy Prendergast, all the great jockeys ride here and they all are of the one opinion of how great track it is.
“Champion jockeys such as Fran Berry and Mick Kinane will always give you good vibes of horses having run here.
“The track is always well maintained and is even better maintained now with its new ground staff; you have Dermot (Cantillon) chairman and Eamonn (McEvoy) general manager, two get-up-and-go young people, this place is only going one way and that is upwards.”
It is only a matter of time before those who have the power give it a Grade 1 flat race, it is a Grade 1 track, added Walsh. Warming to his comments the Kill based trainer added “no one ever complaints about the ground, the only way a horse gets bet at Naas is it is not good enough; you turn into the straight and have three furlongs or so to the post; it is a track that you can never ever come late enough on; it's an ideal locality mid-way between the south and north, the east and the west, it is the ideal place for anyone and just look at where we are today in this magnificent new building, The Circle.”
Ted went on to say that it is great that Lawlor's of Naas is now firmly connected to the track with the upcoming Grade 1 Novice Hurdle.
“Lawlor's has been a great watering hole for over a hundred years; it is a synonymous name, know far and wide and now the major renovations there will only enhance the hotel to more and more.”
Waxing lyrical Ted said “I love everything about Naas and it has been a good track to me down the years whether riding or training and it is great to see these young generation of trainers such as Joseph (O'Brien) and Gordon (Elliott) running their best horses; it is always a great sign when you see the top trainers running their horses here; you very seldom get damaged at Naas; winter or summer; they continue to improve the facilities at every opportunity.”
Reminding those present that the new facility has been used as a courtroom for the past few months Ted added “what with lads losing their licence, getting six months, nine months, or whatever, sure you think you were in the Turf Club,” which brought a fair bit of laughter .
As for the €90,000 Lawlor's of Naas Grade 1 Novice Hurdle, trainer Gordon Elliott said “we have a good few entered in the Lawlor’s Of Naas Hurdle and the plan is to run Envoi Allen. He won The Royal Bond well at Fairyhouse and the step up two and half miles will suit him. We’ll run something else along with him, we’ll see closer to the time but Envoi Allen will go to Naas,” insisted Elliott.
Martin Brassil hopes to run Longhouse Poet, an impressive winner of a Navan maiden hurdle
Joseph O’Brien said “Midnight Run and Embittered will probably go to Naas. We also have Front View in the race and we’ll see what we’ll do with him a bit closer to the time.”
Willie Mullins who has won this race with the likes of Belshill and Next Destination, is responsible for four of the 24 entries, while Mouse Morris will be represented by French Dynamite, who won his maiden hurdle at the first time of asking at Thurles.
Mercedes Bagnall, Sales & Marketing Manager of Lawlor’s Hotel in Naas said “We are delighted to sponsor the Lawlor's of Naas Grade 1 Novice Hurdle and Winter Ladies Day. This is our sixth year to sponsor and our partnership has proved successful as attendance has grown, as well as the quality of racing.”