Back on track after recent set-backs 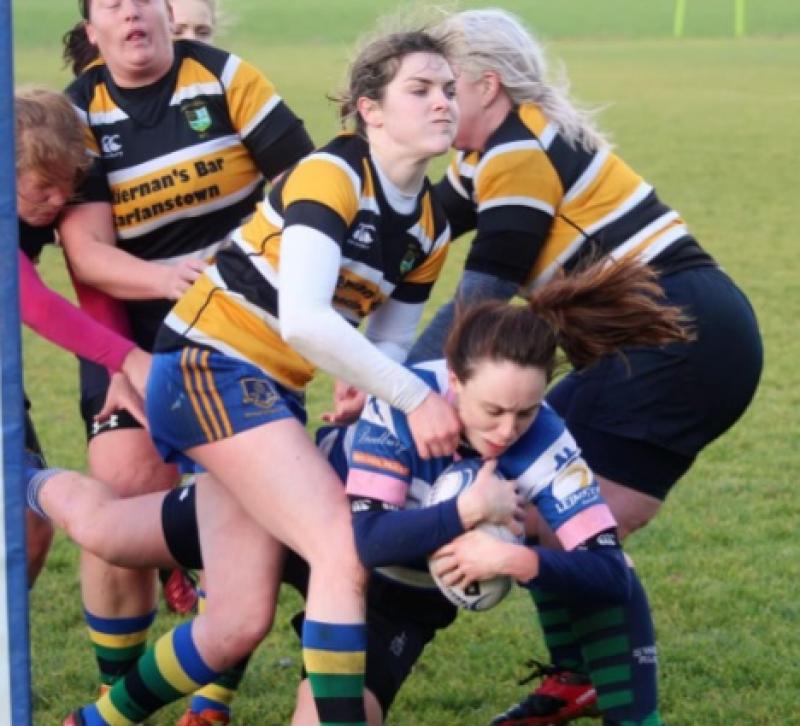 After a number of recent challenging fixtures Athy RFC senior women’s team got their League Division 4 campaign back on track with a closely fought win away to North Meath/Swords (NMS) on a finals core line of 12-5.

This was a game played in weather conditions that made ball handling difficult for both sides and the resulting game was a bit of a stop start affair throughout.

Athy approached the match focused on playing the game on their terms and to a large extent achieved this. But for cold hands and a wet ball Athy might have registered at least two or three more scores. As it was handling errors brought promising attacks and overlaps to a halt on a number of occasions. Overall though the visiting team will have been pleased to register the win and satisfied that their work at training was made itself felt on the field.

Athy started on the front foot and dominated territory for much of the first half. The visitors made this dominance count when the pace of full back Niamh O’Connor rounded the NMS defence before cutting back in for a fine score under the posts after 10 minutes of play. With the try being converted by outhalf and captain Sarah Hendy Athy looked to be settling in to a period of dominance but  to their credit the home side upped their defensive work rate to deny Athy some promising attacking moves.

NMS did enjoy periods of possession but the visitor defensive line speed was excellent with half backs Sonia Keegan and Sarah Hendy, centres Aileen Langton and Ger Kelly and the back row of Sabrina Mannion, Jade Molloy and Elaine Lynch leading the way in tackle count. NMS rarely established threatening field position though and while Athy did push into the home territory the attacks broke down, letting NMS off the hook. On the occasions that NMS did manage to get the ball out wide the back three for Athy of Niamh O’Connor, Patrycja Gruba and Louise Fennelly covered the threat with some excellent tackling.

While Athy continued to have the greater share of possession in the second half NMS did enjoy a period of territory dominance in the final quarter that had the visiting defence under pressure. A series of penalties allowed the home side to advance towards the Athy line and eventually they broke through to score and narrow the gap to 2. This only served to galvanise Athy efforts and they quickly responded by bringing play deep into NMS territory through excellent phase and continuity play. After a period of pressure on the NMS line Aileen Langton broke through for what ultimately proved to the decisive score.

The match finished out with NMS again at the Athy line but excellent defensive discipline by the visitors held them out with the ball being held up before a relieving penalty won for NMS not releasing. The home side had one last chance for a score after a dangerous loose ball was almost picked up with the line open but was tidied up by the quick thinking of wing Louise Fennelly. Athy will have been very happy with the result and will know that but for some unfortunate handling errors at critical points they could have registered a more comprehensive win.