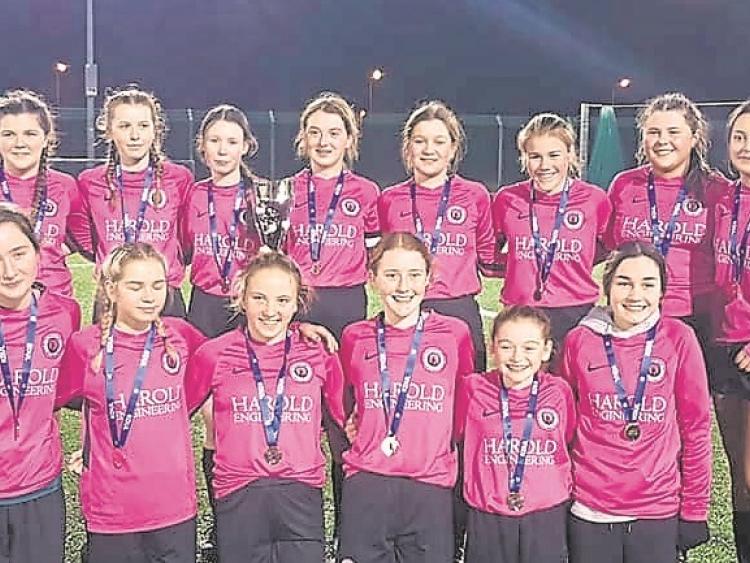 Newbridge United girls claimed their second double in two years with a 4-1 win over Sallins Celtic last week with a hard fought win on the all weather pitch in Kilcullen.
Sallins were determined to make the reigning champions battle and they did this from start to finish.
The game was very tight and although Newbridge United created the best of the chances in the first half, Sallins defended resolutely to go in at half time on level terms.
The second half started in the same vein with Newbridge United trying to break down a strong Sallins defence. Eventually after much hard work Orlaith O'Mahony put Newbridge ahead five minutes into the second half.
Sallins did also make some forays into the Newbridge United half but they found it difficult to find a way past some staunch defending from the Newbridge girls.
However, Sallins were given a lifeline when a shot form the edge of the box struck one of the defenders and Sallins were awarded a penalty after some discussion between the referee and the assistant. Sallins dispatched the spot kick to make it 1-1 with twenty minutes to go.
Newbridge United showed their class and character at this point in the game.
Within sixty seconds of the penalty Erin Healy had put Newbridge United back in front.
Great work from Siofra Galvin and Zara Beatty created the opportunity but from about 20 yards Orlaith put it into the top corner to put Newbridge United 2-1 up.
Sallins started to push forward at this stage and Newbridge United took advantage with Orlaith O'Mahony grabbed her second and a third to make it 3-1.
With only five minutes remaining Newbridge added a fourth from Heidi Muirs and the match finished 4-1 but it was probably a little hard on Sallins who had defended so well for most of the match but Newbridge United were just too good on the day and especially in the last 20 minutes.