Most decorated player moves on 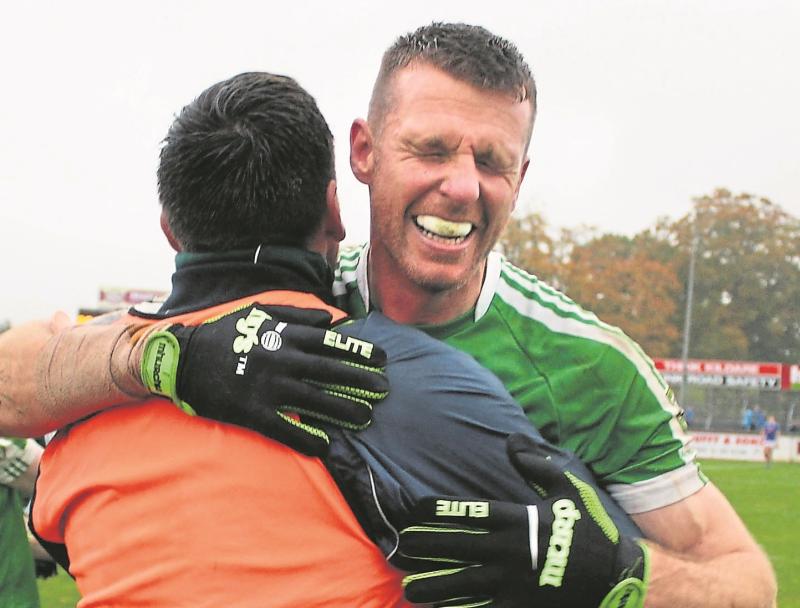 The joy of it. Roli Sweeney congratulated after winning his ninth SFC title in 2017

He won his first senior county title back in 2000, the same year he first played for Kildare but now 19 years on and having amassed an incredible nine senior football championships, Ronan Sweeney has been forced to hang up his boots.

One of the most popular players to ever don the white of Kildare and the green of Moorefield, Roli played for Kildare for 13 years, winning one Leinster title in 2000.

He picked up a knee injury in this season' Kildare SFC final, that saw him miss the replay, but now he has confirmed that the knee injury has forced him to call it a day.

There are few, if any player in Kildare that has made a greater impact at local than the poplar Sweeney (39).

Time and time again he pulled his beloved Moorefield out of the fire, often against arch rivals Sarsfields; at one stage a staunch Sarsfields supporter offered to "personally build a monument to Roli ... if only he would retire."

Hugely respected by his fellow clubs players and indeed players from every club throughout the county and indeed further afield, he will be a huge loss (as a player) for The Moores.

He has been a coach to both Waterford and Sligo senior county teams, under Niall Carew, and of course with Kildare under Cian O'Neill.

No doubt, if he so decides he would be a huge addition at either club or county level managing/coaching.

Will he take up such a role now that he has decided to hang up his boots?

Well with the Moorefield hot seat presently vacant, as is the Sarsfields one, the great man will not be short of offers and that's for sure.

We wish him well.

A brilliant player, a great servant to both Moorefield and to Kildare.

And a gentleman to boot!