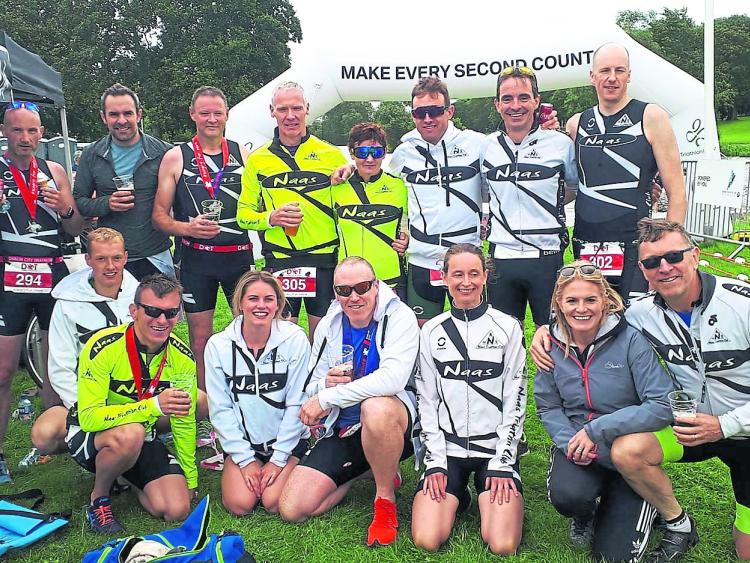 Members of the Naas Triathlon squad

The Triathlon season ended with a flourish for Naas Triathlon Club with lots of athletes enjoying the last few events of the year.
The Killashee Triathlon is the traditional season ender for Triathlon Ireland with over 100 athletes taking part, many of them first timers.
Michael Burke took the men’s win with Maire Diggin winning the women’s race.
In short course racing, the national series was the big goal for the year with club members racing hard, right up to the death, to earn ranking points.
In the end, Age Group wins in Westport and Youghal, along with podiums in Dublin City, Port Beach and Ennis secured John Howlett top spot in the men’s rankings for Naas with an incredible tally of 449 points ahead of Michéal Bailey, Joe Smullen and Mark Dowling.
On the women’s side it was Lavana Chamney with 427 points who won her Age Group in Westport and podiumed in Carlow to edge out Aisling Wyer, Tara Johnson and Michelle Doyle for Club honours.
Other members took on the challenge of Long Course racing.
The back end of the season saw some take on the brutal weather conditions of Ironman Cork with more tackling the Wicklow mountains in Dun Laoghaire 70.3.
Another tough, but favourite, event is the Lost Sheep Triathlon in Kenmare where ten members competed while another four more headed to the UK for the Outlaw X.
For some, the chance to race in the sun is more attractive with members racing in Italy at the Ironman 70.3, and Barcelona in the Full Ironman.
Finally, another dozen or so headed for Killary Harbour to enjoy a great weekend at the Great Fjord Swim with distances ranging from 750m to 3,800m.
Naas Triathlon Club continues to be an all-inclusive club with a nice mix of athletes from juniors and novices through to experienced competitors, racing everything from sprint to full ironman events with comprehensive coaching programmes for all levels provided by head coach David Duke.
Training starts up again in mid-November to prepare for 2020.

For more details go to www.naastriclub.com