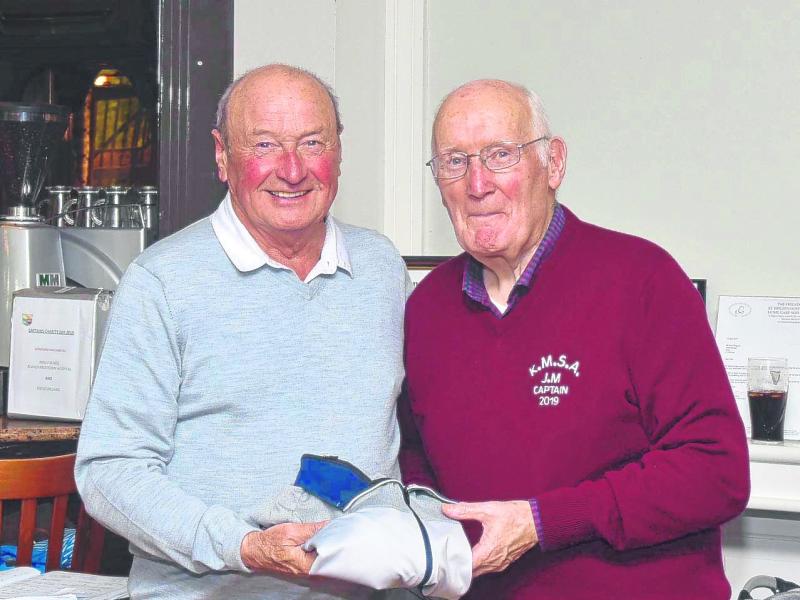 Nearly a year ago now, and over a cuppa at Newbridge GC an idea was born. The idea, to create an Alliance of male golfers from Kildare clubs over the age of 60 and it has been an astounding success.
“Three guys having the cuppa last November were Noel Sheridan, Cathal Kelly and Liam Mulrooney. They contacted people in a number of clubs and asked them to host an outing and nominate 1 or 2 people to sit on the inaugural committee.
The initial meeting took place before Christmas last year and the following Officers were elected: Captain, Liam Mulrooney; Newbridge; President, Charles Moran, Killeen; Hon. Secretary Ger Ennis, Athy; Hon. Treasurer Joe Healy, Millicent.
It was decided to hold an Alliance each month from March to October, always on a Monday which is traditionally the quietest day at each club. Annual Sub €10; competition fee €5 and green fee €10 (if playing in a club other than the home club).
The first outing was held in Athy and it was we hoped to have 50-60 on the sheet. In fact 110 played that day, going on to have an average of 100 playing on each outing.
To date the Alliance has 172 members, from 12 clubs, ranging in age from 60 well into the 80’s and the ambition is to grow the membership base in 2020.
Outings since the formation have been held at Athy, Newbridge, Millicent, Cill Dara, Craddockstown and Castlewarden.
The 2019 season ended on Monday October 14 in Killeen with the President’s Prize, while last month a very successful Captain’s Prize day was held at Newbridge.
The Allianz's 'Young at Heart' members played for President Charles Moran's Prize at Killeen and congrats to Jim Russell, Newbridge GC Captain, on his wonderful winning score of 43, while Noel Herterich was crowned Golfer of the Year, not bad for an 80 year old gent playing off 9.
The first AGM took place after the presentation of prizes and while Ger and Joe remain in situ the new President for 2020 is the aforementioned Noel Herterich from Castlewarden, while the Captain is Cathal Kelly of Newbridge.
The Kildare Men's Senior Allianz (KMSA) thank all the host clubs for their hospitality throughout 2019 and are already who looked looking forward seeing everyone (and more) in 2020.