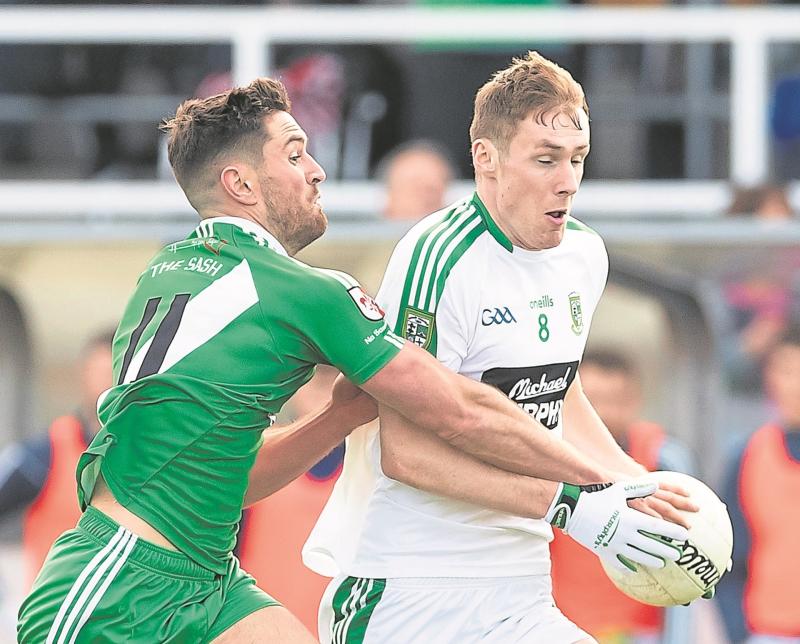 Sunday morning, 12 bells, we take our usual stroll into St Conleth's Park on county final morning.
The 'Big Lad' is in situ at the back of the town goal, surrounded by Moorefield flags, blowing wildly in the mid-morning breeze.
Little bit more of a breeze, cold, icy wind probably a better description.
Sarsfields flags along the Barracks side and behind the Kilcullen goal, none it has to be said, standing still.
The shake-the-bucket brigade for Kildare handball take up position as Naas minor footballers arrive ready for action; Liam McManus in situ, waiting with camera and note pad, all prepared to record the day's happenings from a Naas view point.
Mrs Heffernan, once again, is first past the post through the stiles as she takes up her usual seat at the back of Stand; a true follower if ever there was one; regardless of the game; regardless of the teams, this Nurney lady rarely, if ever, misses a game; in fact it is fair to say she could be rightly regarded as one of, if not thee best supporter of GAA games in Lilywhite Land, club and county.
County Board officials and the many stewards, some with bright yellow bibs, others with ID notices hanging around their necks, all looking spic and span.
Time for a bit of lunch.
One hour later and the home of Kildare GAA is awash with fans descend in big numbers.
Naas and Clane well represented as the minor final gets under way.
Roaring hot favourites, Naas, take an early grip and never let go, but Clane, despite fully aware of their near impossible task, keep at it to the bitter end, although fighting a lost cause from a long way out.
The county town boys live up to their bright billing as a team of exceptional talent as they stroll to back-to-back minor titles.
Impressive or what.
Time pushing on; the turnstiles are ticking constantly, in excess of 5,200 fans fill the old ground.
St Joseph's Pipe Band bring the teams on a round the field tour before striking up Amhrán Na Bhfiann.
The time has come.
County final day; nothing quiet like it; it's where every team wants to be; all the hard work, effort and time is suddenly worth it.
The action gets under way.
The Sash fans are first to roar as they open with a point.
The Moores reply; then fill The Sash net, twice, in a few minutes.
Looking good for the champs as they bid to make it three-in-a-row.
The Sash, after a very nervous beginning, start to settle and begin to find their range.
Still, at the break Moorefield have their noses still in front, but only by two.
During the interval it is the turn of the Jubilee team of 1994, the John Courtney-managed Sarsfields team that defeated Johnstownbridge 2-14 to 0-9.
Star studded team with such household names as Crofton, Nolan, Doyle, Byrne, Sex, Donoghue, Buckley and Brennan, to mention just a few.
Comfortable win by 11 back in '94 and while those and/or their representatives enjoyed another moment in the sun, none more so than Tom 'Dasher' Smith, a member of the backroom that year, who wore a smile as wide as the Liffey, throughout the presentation.
Back to the action on the field and things are hotting up.
Sarsfields came out as they went in, firing over the opening two points to draw level, before taking the lead.
The fans from the bottom of the town are in full cry but The Moores showed they are not champions for two seasons on the trot for nothing, level up before regaining the lead.
The tension is practically unbearable as the backing for both reach fever pitch.
The champs ahead by one as the PA informs us there will be five minutes of time added on, at least.
Chances go abegging to level.
Players throwing their bodies on the line, giving it everything.
The clock ticks to 65 as The Sash make one last dash to save their day, and their season.
Barry Coffey, one of the stars of the day, finds the posts from an almost impossible angle.
Deadlock.
The long whistle.
Strange feeling.
This wasn't the plan.
Not supposed to finish like this.
No presentation.
No roar for the winners.
No three cheers for the losers.
No man of the match.
Back next Sunday.
Something similar?
Hopefully.
Still.
A great day.
A great occasion.
Two mighty teams.
Two mighty clubs.
The best.
Bar none.
Bring it on!