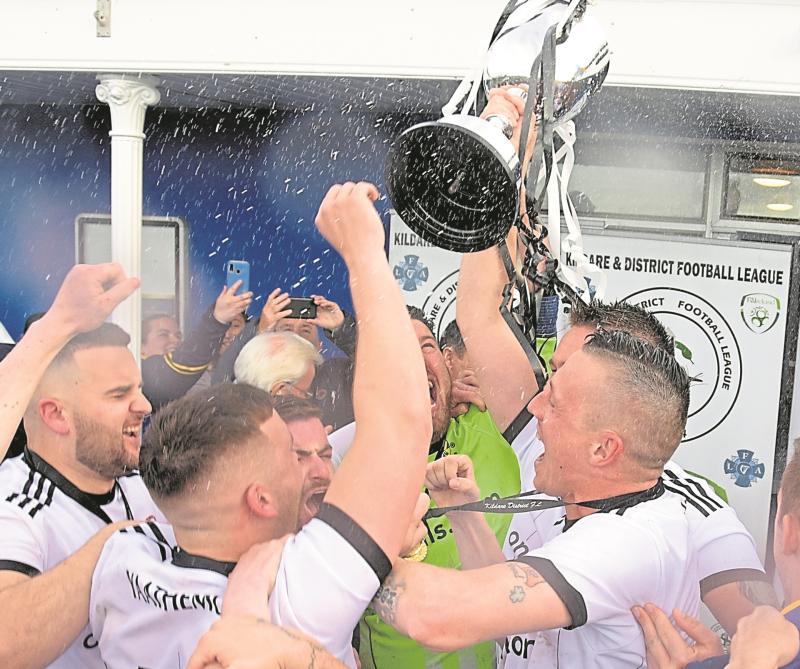 It's always a momentous occasion come Lumsden League Cup Final Day in the KDFL. After a venue change midweek due to storm Lorenzo aftermath, Castle Villa AFC’s Mullarney Park was to accommodate this year's League centre-piece.
The Naas side were certainly more dominant in possession but couldn't create a real clear cut opportunity in the final third.
Clonmullion’s compact approach was frustrating to try to play through and they were more direct in their offensive play. That nearly proved fruitful when Darren Harrison pinged a crisp ball into Nathan Robinson who swivelled and unleashed a thirty yard drive to call O'Connell in Monread goals into action with fifteen left in the half.
A nasty collision between Harrison and Fennessy saw both player's sport bandages for the remainder of the contest.
Monread’s Aram Vartanyan created a yard of space with some tidy footwork and struck a shot on the turn which trickled wide with ten minutes remaining in the first.
Dean Fennessy and McGrath were very influential for Brian Woulfe’s side in the first half, making tackles and generally orchestrating the play.
Ricky Moriarty and Timmy Doyle put in some great tackles for "Ya the mull" and organized the troops when needed. Kian Cully and Alex Dunne were always on the ball from the back and Vartanyan and Woulfe were a threat when in possession for Monread.  Robinson, Mulhall and Lee Doyle all looked minacious with the ball at their feet also for the Athy men and a five yard Cody Mulhall pass to Stevie Donovan just outside the 18 yard box produced the last chance of the half, but his snap shot never really troubled Byran O Connell in truth. And both side’s went in deadlocked at the break.
Monread certainly took the initiative with  Deano Fennessy early on in the second half. After his excellent run through the middle he slipped a ball to Conor Woulfe who coasted by two players but couldn't pull the trigger before a great  double tackle from Ross Cardiff.
An Aram Vartanyan freekick was well saved from Lawless moments later after a blistering start to the second period.
Clonmullion still potent on the counter-attack with Lee Doyle a readily available outlet. A Mick Aherne corner was well headed away by Boylan, but fell to the left boot of Dave Carroll who volleyed just wide of the left hand post with an hour on the clock.
It certainly felt like a goal was about to materialise but the expectations lingered on. Cody Mulhall and Robinson whipped in some audacious set-pieces as Clonmullion edged closer with each attempt.
It was substitute Olly Dunne who nearly broke the deadlock after his powerful drive whizzed just milli-
metres over the crossbar.
Monread made three change with Whelan, Woulfe and McGrath for Hammersley, O Connor and Murphy. Clonmullion’s Lee Doyle made his exit and in came the energetic Foley.
It was that man Fennessy again who was in the midst of thing, after he had the ball in the Clonmullion net and was ruled offside with twenty minutes remaining.
Another Vartanyan freekick crashed off the wall as he just couldn't measure the range correctly today.
Cody Mulhall found a yard space between Alex Dunne and Cully and drove a brilliant shot which O'Connell pushed around the post.
It was Mulhall again who turned provider with a clever little back heel into the path of Stevie Donovan who blasted his effort Into the side-netting with five-minute remaining.
The last real effort of the ninety fell to Monread skipper whose toe poked effort was straight at Lawless. It was still deadlocked at the final whistle with both teams not willing to concede an inch.
Cody Mulhall now operating up front and gestured to get the ball up quicker. When Boylan knocked a first time pass into the Clonmullion Target man he showed a deft piece of skill and dragged the ball pass two player before firing his shot pass O'Connell to send the Clonmullion supporters into raptures, 1-0 to the "Mull" with 3 remaining in the first period of extra time.
Timmy Doyle put in the tackle of the game when he flew across at full stretch to block a Ryan O'Connor shot from six yards to prevent an almost certain equalizer.
Monread didn't drop the heads and came out in the second period looking really positive. It looked like they got the breakthrough when an excellent shot by Olly Dunne had Michael Lawless scrambling across goal but crept just wide of the right hand post.
Dean Fennessy with a sublime bit of skill lifted the ball over Cardiff's head and got a half shot away which Lawless dealt with to the relief of his backline.
The icing on the cake came with a minute on the clock as Mulhall took advantage of a rare mix up in the Monread defence and pounced on a loose ball to grab his second.
Best for Monread, Whelan, Fennessy, Dunne, Cully and McGrath.  A tough loss to take for the Naas men who'll be bitterly disappointed but played their part in a very competitive contest. They will bounce back no doubt. A team that always plays attractive quality football.
Still in competition they will play the CCFL’s Temple Villa FC next Sunday in the FAI Junior Cup (Round 2), Enniskerry YC in Round 1 of the LFA Junior Cup and CCFL champions Willow Park in Round 1 of the Leinster Senior Cup, representing the KDFL as our League Champions 2018, in the coming weeks.
Best for Clonmullion, Mulhall, Moore, Doyle, Cardiff, Moriarty, Robinson and Donovan. The day belonged to Clonmullion who've been superb all season. Challenging on all fronts with their own brand of football. I think they really epitomize the word "team".

Two of Tony Lumsden’s grand children Emma and JJ were on hand with their father Clive to present the trophy to ‘The Mull’ on a day to saviour for the Athy Club.