Leixlip hoping to regain senior status after one season in intermediate 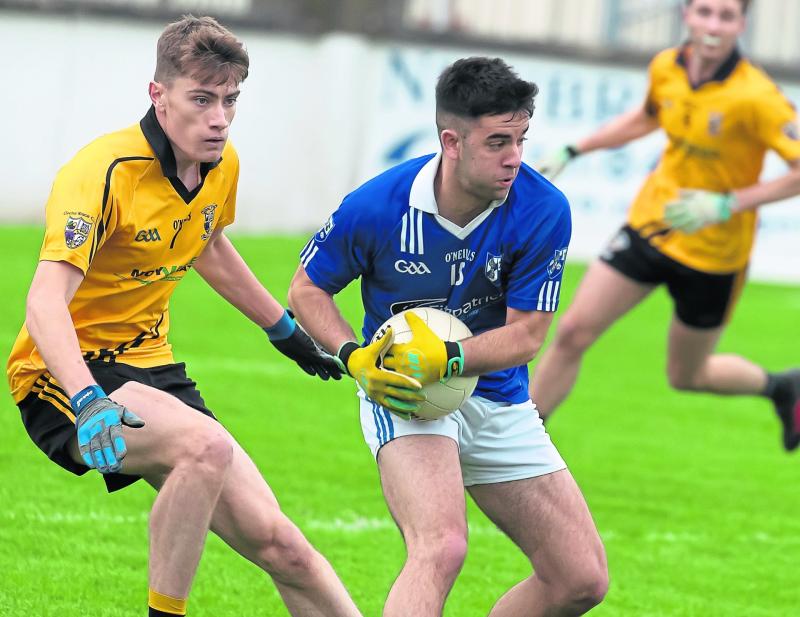 It is often said that you have to lose a final before you win one, and while that is usually the speak from a team that has lost a final (and then qualified for decider 12 months later) but come Sunday afternoon Monasterevan will certainly be hoping that that particular point of view is right as Brian Lonergan's Monasterevan line up against Leixlip in the final of the 2019 Pittman Traffic Intermediate Football Championship.
In 2018 Monasterevan reached the final after drawing with St Kevin's, following a replay and extra time, and it left them just one week to recover prior to taking on Two Mile House in the decider.
That one week, the Blues' boss feels did them no favours.
“We are delighted to be back in the final, last year we went into it after a replay and extra time against Kevin's and we were a bit mentally jaded but this time we have a two week gap and I think the extra week will be massive for us.”
Monasterevan have come through a few tough en-
counters to reach Sunday's final, having initially gone through their group with three wins from three against Kilcock, Ballyteague and Kilcullen.
They met, and defeated, Ballyteague again in the quarter final but in the semi final they looked to be on their way out, trailing Kilcock deep into injury time.
Yet despite having a goal disallowed they still had the wherewithal to hit back immediately and find the Kilcock net with another, this time legitimate, goal to win by a single point.
That experienced seems to have stood to them when they played Clogherinkoe in the semi final. It was only in the last ten minutes or so they got on top in that game and it certainly pleased their manager who said “we had to dig it out in the end but we got over the line, we finished the last eight or nine or ten minutes strong, Ryan (Bannon) and Padraig (Nash) kicked two great scores to put us two clear; we are just delighted to be in the final after last year.”
Padraig Nash looked to be on one leg for most of the second half and looking at him leaving the ground after the game he certainly looked worst for wear but his boss did not seem overly con-
cerned as to his (Nash) availability come the final.
“Padraig has been carrying a knock for a while now; as you can imagine he ships a lot of punishment but he stays on the field simply because it takes two men to watch him and that frees up opportunities for everyone else, but really everyone has been delivering for us this season; we used 20 player in the semi final, we had to use 20 players and I think they all stood up and everyone did a good job” added a very happy manager.

Leixlip, who came through their group games without too much bother against Straffan, Nurney and Kill before defeating St Kevin's in the quarter final and Sallins in the semi final, have enjoyed a good season as their manager Eoin Dunne is quick to point out.
“You need experience to win this intermediate, as with any championship but we have that and we brought on a few lads in the semi final that should help us going forward; giving young lads an opportunity to learn their trade and they are all enjoying their football at the moment.
Leixlip have not been in a final since they graced the senior decider all the way back to 1986 so Sunday has the potential to be a real stepping stone for them .
“We completed in Division 1 in 2018, I was there when we stayed up and I said to the lads we were far more competitive in Division 1 this year than we were last year despite being relegated.
“We played Naas with our backs to the wall; we got a point up five minutes into injury time and six minutes injury time they got an equaliser so we could have stayed up, but we have shown in the championship what we can do; we have been playing with confidence, we knew it was going to be different and that we had to treat the grade (inter-
mediate) with respect but we knew we had a chance; we were relegated last year but the lads came back the first week in December to start prepping for this year; we had an outcome goal rather than a performance goal; a really doable outcome goal which is the intermediate championship final.
“All round we have very good squad; lads who are willing to work for each other and they are listening to the instructions we are trying to give them; it is very much a team effort and it is great to have an occasion such as a county final to look forward to” added manager Dunne.
“We have been concen-
trating on getting the process right and that is what we will be doing every night we take to the pitch between now and the final but is a great opportunity and a chance to enjoy the occasion.
“We have played all our games up to the semi final in Clane so it's great to get to St Conleth's Park, to be honest I can't wait and we know the final will be a tough day but I fancy our chances to take anyone; we are coming good; still to get a really good performance, apart from the first day maybe against Straffan things clicked but we haven't really clicked since them but hopefully it clicks in the final” he added.
While Leixlip were demoted from the senior ranks last season, neverthe-
less it will be Monasterevan who will probably go in as favourites. They have had what looks like a tougher path to the decider and have what every teams needs to win a championship, regardless of the grade, and that is one or two marquee players.
In Padraig Nash and Ryan Bannon they certainly have that but they have a lot more that just those two lads.
Missing from their line-up this season has been Wayne Fitzpatrick, brother of Kevin. Wayne has been on overseas duty with the Defence Forces in Syria but was due back last week and is expected to be added to the panel and while the fair haired forward may be somewhat rusty, he is a class player and can add a lot to the side.
DJ Earley, Tristan Kennedy, Eoin Stapleton, Paul Maloney are all more than decent players while John O'Toole is a class act as he showed when in the semi final looking after the ever- dangerous Brian Robinson of Clogherinkoe.
For Leixlip, their no. 1 player is county man Tommy Moolick who, as usual, gives it his all whether in the maroon of Leixlip or the white of Kildare.
He forms a decent midfield partnership with Darren McDermott; team captain Ciaran Fadian, along with the experienced John Doran are no mean defenders while up front Leixlip have plenty of experience with the likes of Paddy Meagher, Eamonn Murphy and Dessie Hynes.

All in all it should be another top class decider, like most finals of late, don't expect a lot between the sides but at the end of the day the nod goes to Monasterevan, not only to prove that to win one you have to lose one first but more importantly for them, to show they are the best intermediate championship side of 2019.