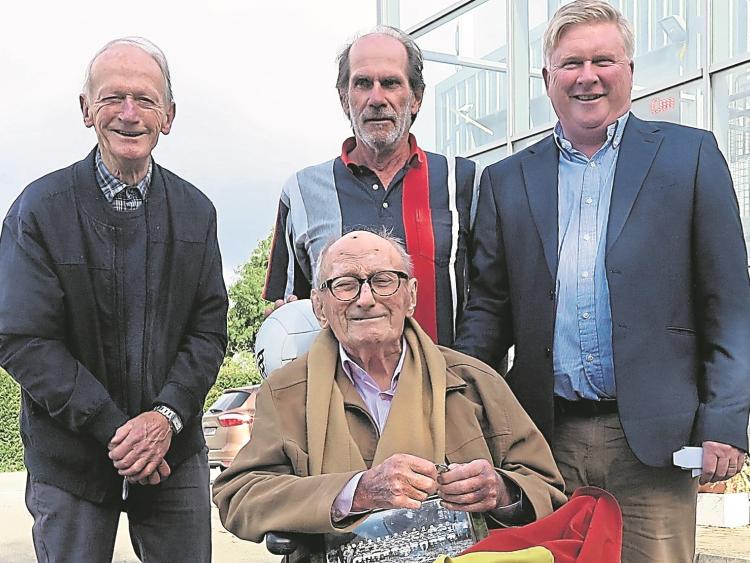 Barry O'Connor, front, with his with his son Ray left, Larry Graham chair of Ardclough GFC and son Frank,

It was 70 years last week since Ardclough won their one and only SFC, shocking a star-studded army side after a replay. The only surviving member of that team, Barry O'Connor, returned to the Ardclough club last week to mark the anniversary.
Barry, now 95, played wing back and currently in a nursing home in Rathgar.
He came to Ardclough on the anniversary with his medals to be met by Larry Graham, club chairman whose father and two uncles were on the team. Barry was accompanied with his sons Frank and Ray.
Ardclough’s achievement in winning the 1949 Kildare SFC was stunning. They beat one of the most talented club teams in the country, in a replayed final, before 10,000 in Newbridge, a record at the time.
Five of the Army team were inter-county stars. John Joe O’Reilly of Cavan was a household name thanks to the Polo Grounds final in 1947.
The Ardclough team was built around a few families on what was an even more rural area at the time, three Grahams, O’Connor’s, Burkes. They won the Kildare junior championship in 1941, the intermediate in 1944 and, eventually, the senior championship in 1949.
Ardclough had a reputation for being hard men but there were fine footballers amongst them, many went on to play with Kildare.
A special train was run from Kingsbridge, Ardclough supporters piled on at Hazelhatch and Straffan stations. The teams togged out in the nearby hall and walked to the field behind the Ardclough brass and reed band.
When the match eventually got under way a series of great saves by Jim Nolan in the Ardclough goal earned a replay.
Christy Burke was the star of the replay, when a Dick McKenna goal before half-time and a series of points from Frank "Butcher" Graham and Jimmy Butler gave Ardclough a 1-11 to 2-6 victory.
Army made five changes, three in the full-forward line, between the draw and replay and used another player twice in the replay, but to no avail.