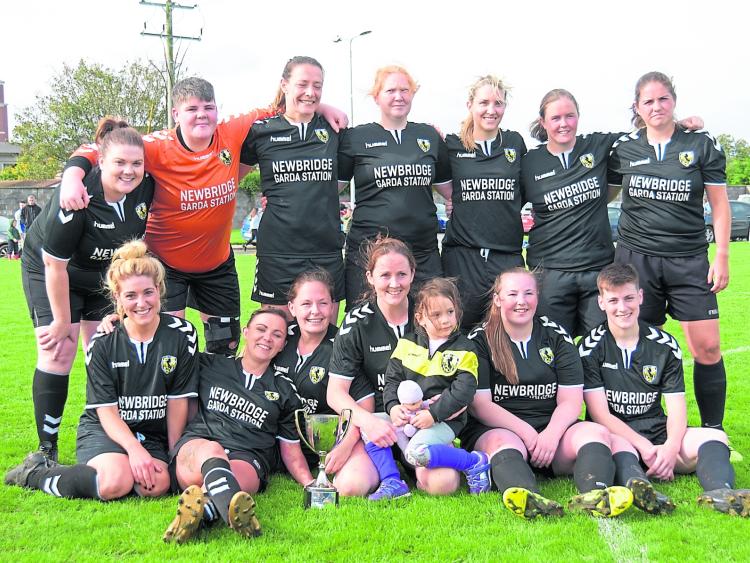 Newbridge Colts claimed their second cup victory in three seasons on a sunny Sunday morning in Athy.
Naas kicked off in Michael O’Neill Park, home of Clonmullion FC and looked to put Colts under early pressure.
Jess Turner had a couple of decent efforts from distance while skipper Sinead McBride headed over from a corner.
In the 10th minute a quick free kick from Laura Mathews to Orlaith White sent the Naas captain down the left, she played a great through ball to Sofia Di Stefano on the left wing.  Sofia pulled the ball back to Mathews but her shot from 12 yards was blocked for a corner.
On 16 minutes Naas forced a corner and the delivery from Mathews was cleared back out to the Naas play-maker who turned onto her left foot and whipped in a dangerous cross from the right and Alice Linehan's glancing header went just wide of the far post.
Naas were applying the pressure and were in again on 22 minutes when a ball played out from the back by Shauna Byrne found Laura Mathews, Mathews turned and played a delightful chip over the full back to send Orlaith White through on goal.
Orlaith steadied herself and sent a curling shot to the top left corner from the edge of the box but the keeper did really well to tip it wide for a corner.
With Colts pushed back at this stage, forwards Stacey Long and Carmela Morey had to work hard to relieve some pressure but they were a constant threat with their pace.
A slight defensive lapse as the half drew to a close led to a very significant moment in the match. Stacey Long reacted quickest to a miss-control to gain possession and head towards goal.
The covering defender resorted to pulling her back inside the penalty area. The referee was left with little choice but to issue a red card and consulted with his assistant before deciding the infringement was inside the box. McBride stepped up to take the spot-kick but the ball cleared the cross-bar to leave the sides deadlocked at the interval.
A re-organised Naas came out for the second half with Mathews at centre-half and tested the Colts defence immediately.
A superb run from Naas’s Amy Burke saw her beat no fewer than four Colts' players and she squared the ball to Orlaith White who set up Sofia on the edge of the box but her shot went agonisingly over from 16 yards.
In the 50th minute Vicky Hayden won possession from a kick-out and fed Stacey Long. Long used her dribbling skills to bring the ball towards the end-line on the right hand side and created enough space to whip in a dangerous cross. Hayden flicked it on and Morey bundled the ball home into the bottom corner.
Full-backs Lorraine Foran and Emma Hannon were handling the talented Naas wingers well at this point and Sarah Duignan was linking the midfield and attack.
The important second goal came in the 70th minute. Long and Hayden were once again involved as Morey picked it up outside the box and took on the left back.
Once she has created a little space, she curled a dipping shot over the keeper just under the crossbar. Lea Ronan was introduced to thwart the Naas threat down Colts left and Pauline Fox did a similar job on the right.

Naas threw players forward in search of the next goal and really dominated possession for the remainder of the game with Sofia Di Stefano was getting great joy down the left and Amy Burke was a constant threat up front.

On 67mins Sofia was set through by Laura Cusack and she cut in on her right but the shot which was heading for the bottom corner was somehow clawed out by the keeper who also saved Alice Linehans rebound.
Aine Cummins then played in Laura Mathews who was fouled as she went to shoot from 20 yards out and the resulting free kick was just too high and sailed over the bar.
Colts were happy to hear the final whistle and Captain Sinead McBride gladly lifted the cup on behalf of her team after a very hard fought  final.