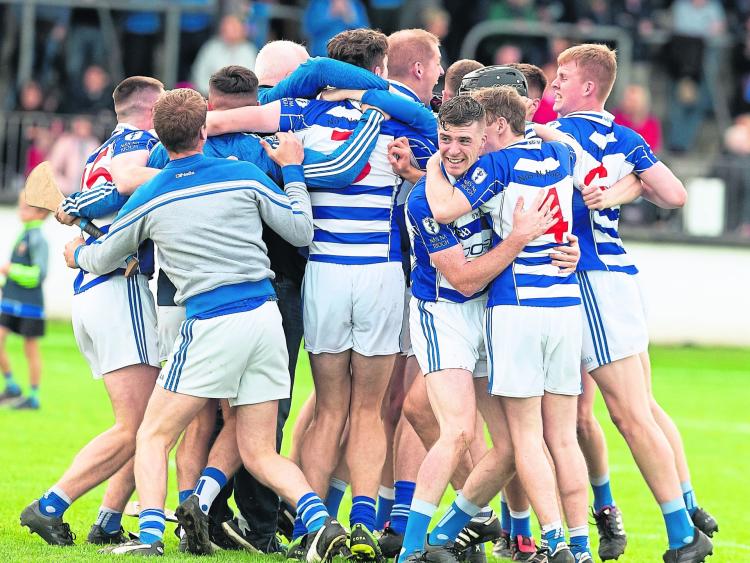 Naas players celebrate after the final whistle of the SHC

This has been a long time for the club and we are all absolutely over the moon was the initial comment of Naas senior hurling manager Colm Rourke following on the team's defeat of Coill Dubh in the Haven Hire SHC at St Conleth's Park, on Sunday.
The Tipperary native admitted that the final was no classic “but we had a real workman-like performance from our lads, we knew we would need a major effort and work rate to get us over the line and that is exactly how we achieved our win today.
Although leading at the break by four points, Naas had left a lot of scores behind them so was the manager at all worried or concerned at that stage?
“No, not at all, they (Coill Dubh) were not getting many scores, we had a lot of possession and we kept them to just five points in that period; at the break we spoke to the lads telling them to just keep doing the same and as the players got tired the scores would come eventually and I think we did that.”
The relief was there to be seen, maybe not so much on the manager but certainly on the faces of all the players and the fans who have all endured a torrid time over the past few seasons.
“Look this is great” added Rourke; “it's great for the town of Naas and hopefully it keeps the young lads in Naas and in Kildare, to realise that if they persevere the day will come and it has arrived today.”
Brian Byrne who had been doubtful having only played the final ten minutes of the semi final but started the final on Sunday was just like all his colleagues sporting a smile as wide as the St Conleth's Park pitch.
“It's really nice to have that weight taken off our shoulders; the last four years have been tough but we always knew that was in this team and these players since we lost to Celbridge in the final we just did not seem to be able to get over the final but we rectified that today.
“To be honest I wouldn't be able to pin-point what it was; we didn't change anything crazy but said if we worked really, really hard it would come right eventually and today is the day and it is a huge relief off our shoulders.
Byrne, who scored eight points in total admitted that while they (Naas) had a few wides early on we were happy we were making the chances and knew if we kept at it the scores would come which they did.
“Coill Dubh are a very strong side and we knew we had to keep at it, keep those three or four points ahead and make sure we did not concede a goal.”
A man who has played some of the best hurling of his career throughout this campaign was practically lost for words.
Jack Sheridan admitted that “words simply describe it; these are the days we dream of since nursery, down at the old pitch where I started at Fr Brennan Park; but this win puts it all into perspective; it's a brilliant feeling.”