Ruby enjoying life out of the saddle 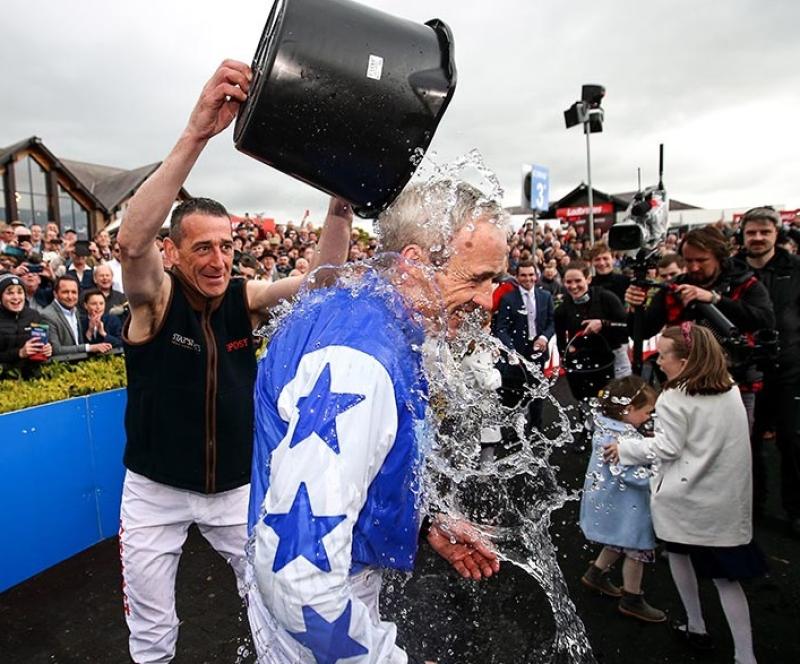 Ruby Walsh, going out with a splash with a bit of help from fellow jockey Davy Russell

It is now six months since Ruby Walsh retired from the saddle, a memorable day at the Punchestown Festival after Kemboy gave him his fairytale exit in the Punchestown Gold Cup. In an interview this week (courtesy of Paddy Power) the Kildare native insists he doesn't miss race riding one bit.

I don’t miss race-riding one bit. Not over the summer anyway, the long journeys, the late nights – I didn’t miss any of it. I got out at the right time – I’ve no doubt about that. Funnily enough though, the jumps season never really ended at Punchestown for me anyway – it always finished in Paris three weeks later as Willie normally sends a few horses to Auteuil.

I watched Benie Des Dieux winning the French Champion Hurdle on May 18, just 17 days after Kemboy gave me my fairytale ending when winning the Punchestown Gold Cup. When Benie crossed the line, it was the first time in my career that I didn’t feel like I was missing out on a Willie Mullins-trained winner.

I was clear in my mind when I retired that they were no longer my rides and that proved it to me.

Sports people often use the phrase about ‘visualising’ how something will happen. I had ‘visualised’ it and after discussing things in the months afterwards with other sportspeople, I realised how much in common different sports have.

The preparation, the mind-set, the way different people see things. That winning ride was the dream I was chasing at Punchestown and it was brilliant to end on a high like that.

The horses are now in off their summer break and the preparations are going well. We’re looking at what races will suit different horses and trying to plan out their programmes for the season ahead.

That’s coming together bit-by-bit and I’m enjoying that aspect of it.

I didn’t manage to go skiing in the summer, but hopefully I’ll get to do that early next year. I did go on holidays in July though and that had never happened before – at least not on a trip that didn’t involve crutches.

Going away when the kids were on their school holidays made for a very short summer because we’d normally have gone in June when it was quiet for jumps racing. This year, before I knew it, they were all back in school.

I was in Tokyo last week as a Paddy Power Ambassador for Paddy’s Japan Slam and it was a brilliant trip. Anytime I’d been abroad for work before always involved race-riding – and generally just for one race whether it was Japan, Australia or the United States.

Back then, I just suited myself and slept and ate to get ready for one contest, where you just had to be ready basically an hour beforehand. But on a filming schedule you had to be up and ready to go for several hours on someone else’s schedule. That was different and was the first time I’d ever really experienced jet lag.

I’ve also done a bit of presenting on RacingTV, which I really enjoyed and even starting the new radio show ‘Game On’ on RTE 2FM is a new type of challenge and I’m looking forward to it.

I always enjoyed sport and racing is a fairly niche market. While I still love it – hopefully I can broaden my horizons.

All I ever did as a jockey was study form, but now I get to read about rugby, soccer and all the other sports I’ve always been interested in, but rarely got to enjoy as much.

I’ve more on now than I ever had and will hopefully figure out which direction I’m going in next.