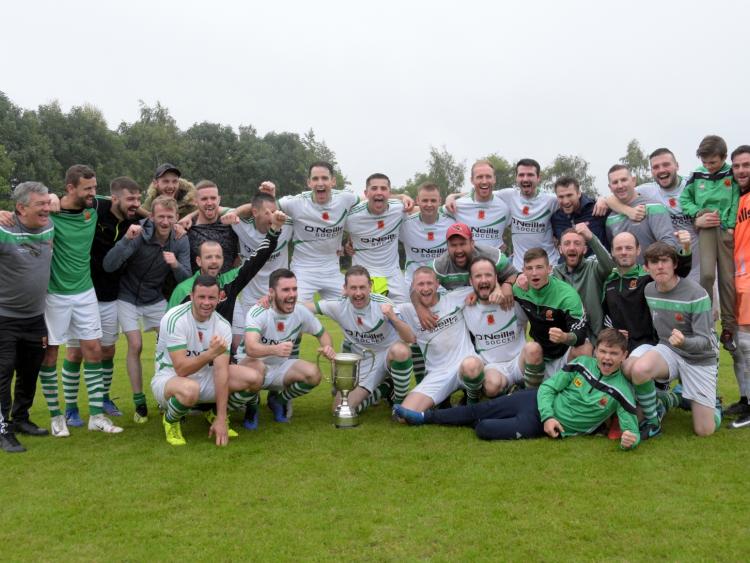 For the second time in three years Suncroft AFC have been crowned CR Wynne Feeds Senior Division 1 champions following their 3-1 win over Monread FC (away).

It is a marvellous achievement by the club and club captain Ray Coleman was over the moon following the win.

Following a couple of half chances from the home side it was the visitors and eventual winners who broke the deadlock after 20 minutes with good midfield play between Kieran Sheedy and Ryan Dick the ball was played a little too strong. However JP  McDonagh used his pace won the ball right on the side line he took on his man and beat him with ease to pull the ball back to Connolly at the edge of the box and the little magical number ten took a touch and found the top corner of the net to put the Croft in front.
Their celebrations were short lived as one minute later it was even steven again when a mix up between skipper Ray Coleman and keeper Kevin McDonnell saw the ball dribble to a open net to level matters at 1-1.
Suncroft were not going to relinquish their lead and got right back into the game as they upped the tempo and took the game to Monread.
The visitors defence of Brendan Curtis, Mark Boland, Ray Coleman and Dillon snuffed out everything and on most occasions it was Brendan Curtis starting attack after attack.
Suncroft took the lead again and it was Connolly and McDonagh linking up. Connolly crossed to the back post where McDonagh was lying in wait and he headed home to make it 2-1 to the visitors five minutes before the interval.
The restart saw Monread press for the equaliser but were being held by a mean Suncroft defence.
Ollie Dunne had a great shot saved only to see the rebound hit Dean Fennessy knee and go wide for the Naas side.
The home side retained possession for large parts of the game but the hard working Suncroft midfield and defence made it hard to penetrate and achieve decent goal chances.
Suncroft’s JP McDonagh and full back Brendan Curtis were very dangerous going forward as Suncroft looked to put the game to bed.
Bennett and Sheedy both picked up yellows and changes were made as last week’s man of the match Trevor Connolly came on for Bennett and Ryan Burke on for Sheedy.
The introduction of both was almost immediate when with 20 minutes remaining Trevor Connolly banged home a Ray Coleman corner to put two goals between the sides at 3-1.
Monread brought off Killian Whelan and Ryan O'Connor and replaced them with Conor Woulfe and Dave McGrath in an effort to inject more pace to their attack but the Suncroft defence held firm to the final whistle.
This is a league title that was hard won by The Croft playing seven games in August, scoring 40 goals and conceding only four in that period.
At a time in the season where every game counts for many top KDFL side’s as they look to the League run in with Cup/Shield semi Finals, Finals, LFA and FAI Cup participation and League Representative participation all before the end of November Suncroft kept their composure to lift the title.

Their man of the match on the day was a joint effort between JP McDonagh and Brendan Curtis while Best for Monread were Mick Aherne, Shane Reeves Keane Cully Ollie Dunne, Dean Fennessy.