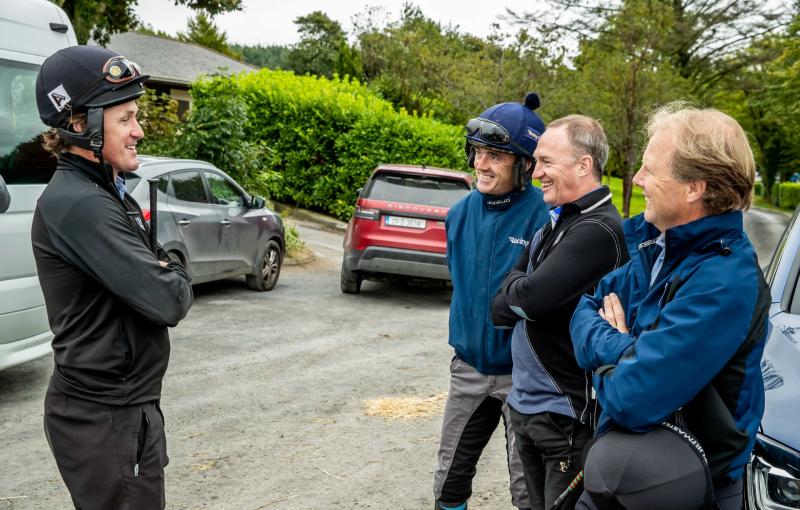 It is not every sports man or woman that is instantly recognised by their christian name but when you hear such names as AP, Ruby, Paul and Charlie, along with Joseph, you instantly realise you are talking jockeys, horses, racing and four of the greatest jockeys that ever rode over fences and hurdles along with a former classic rider and trainer.

To give them their full names, McCoy, Walsh, Carberry, Swan and O'Brien and it can only mean one thing, Pat Smullen Champions Race for Cancer Trial Ireland, at Flat Headquarters the Curragh, on Sunday week, September 15.

The quintet were at the famous Owning Hill gallops this morning (Tuesday September 3) as they stepped up preparation for the massive fund raiser on both days of the upcoming Longines Irish Champions weekend.

The five will be joined by other champions, greats such as Johnny Murtagh, Richard Hughes, Kieren Fallon and Ted Durcan in the nine-runner Pat Smullen Champions Race on Sunday week.

The race will be run as the seventh on a stellar card that boasts four Group 1s and will feature alongside a number of other fund raising activities happening over the weekend for Cancer Trials Ireland – the leading cancer research trials organisation.

After riding out this morning, Charlie Swan said: “It was nice to see the guys and it’s obviously all for a very special cause.  I rode a few winners at the Curragh at the beginning of my career as an apprentice with Kevin Prendergast and one of my best memories of the time is beating Lester Piggott by a neck to win a handicap over the mile course that we’ll be riding on next Sunday week. I was probably 17 at the time.  It is going to be a wonderful occasion and we are all very much looking forward to it.”