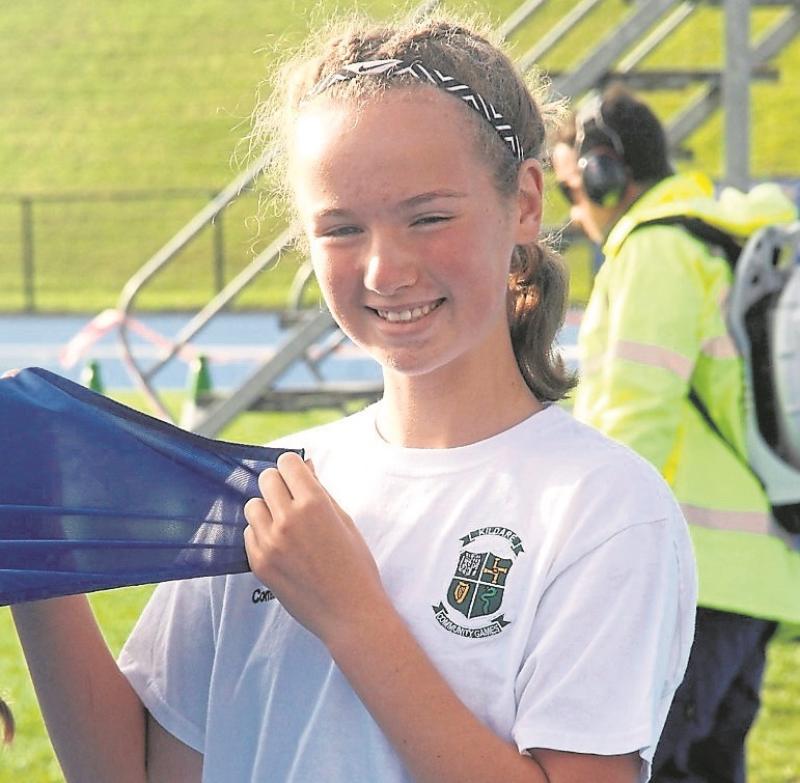 It was high-fives all around for Kildare as the curtain came down on the 2019 Aldi Community Games National Finals from University of Limerick.
The young Lily whites competed with great pride and honour as they came away from Limerick with 5 each of Gold Silver and Bronze along with three fourth placed medals.

GOLD
Kildare started off the weekend in style as both Conor Walsh (Prosperous) and Lara Prendergast (Suncroft/Curragh) took Gold in their respective U14 Javelin events.
Lara had earlier been the Kildare representative at the opening ceremony and Conor went on to achieve double Gold as he laid the foundation for his team to take Gold in the U14 Relay event on Day 2.
Runo Ayavoro sprinted away from his rivals to retain the Under 16 100m title in his last outing in Community Games as a competitor after nine years.
At the other end of the spectrum young Ellen Moran was starting her Community Games career winning Gold in the Under 8 “B” Final.
The Under 14 Relay team from Prosperous led by Conor Walsh on first leg ran the perfect race to take Gold. Daniel Smal fed Oran O’Grady and Dara Cosgrove took the team home.

SILVER
The Sallins U16 Relay team of (Adam Donnelly, Daire Kelleghan, Tristan O’Connor and Leon Sweeney) came away with Silver as did Mary Harney (Eadestown) in a tough U14 800 Metres.
Theo Hanlon (Suncroft/ Curragh) was thrilled to win Silver in the U12 Ball Throw.
The Newbridge St Brigid’s Under 11 Tag Rugby team (John Paul Archibold, Sarah Behan, Anna Dillon, Peter Dillon, Kate Dunphy, Cillian Hughes, Jessica McNulty, Kate McNulty, Charlie Moylan, Killian O'Donovan) were narrowly beaten by Beaufort (Kerry) by 1 point (try) after extra time in the U11 Tag Rugby final.
Clane Rathcoffey were convincing winners of their semi-final against Bawn Latton (Monaghan) in Under 11 Hurling but found Aglish – Ballinameela (Waterford) in top form in the final. The Waterford team got on top in the last quarter to take Gold with Silver bound for Kildare.

BRONZE
On the running track Bernard Ibirogba (U12) from Newbridge St Conleth’s and Sarah Millea (U16) from Clane/Rathcoffey (U16) both took bronze in their respective 100m races.
Newbridge St Brigid's went home on a winning note defeating Regional (Limerick) by 1 point in the Under 14 Tag Rugby playoff to take Bronze. They had earlier lost out on a golden goal after they had tied with Spa Fenit-Barrow (Kerry) after extra time.
In U15 Girls Soccer Sallins lost out to Fanad (Donegal) in the semi-final but found their rhythm to defeat Ballaghaderreen in the play-off for Bronze.
Andrew Curran fresh from his exertions in the under 15 mixed relay the previous day finished in third place in U16 Pitch and Putt to take Bronze also.

FOURTH PLACE
Andrew Curran and Mary Harney both got their second medal of the weekend when they teamed up with Laura Byrne, Ardin McGee, Bernadette Harney and Aidan Walsh to finish fourth in U15 Mixed Relay.
Turlough Donnelly was very unfortunate for his chain to come off his bike during the Final of U12 Cycling on Grass event. He had been leading but had accrued enough points at the hot spots to earn him fourth Place despite his misfortune.
Colum Walsh from Starffan/Ardclough Earned Kildare another medal taking fourth place in U12 Long Puck.