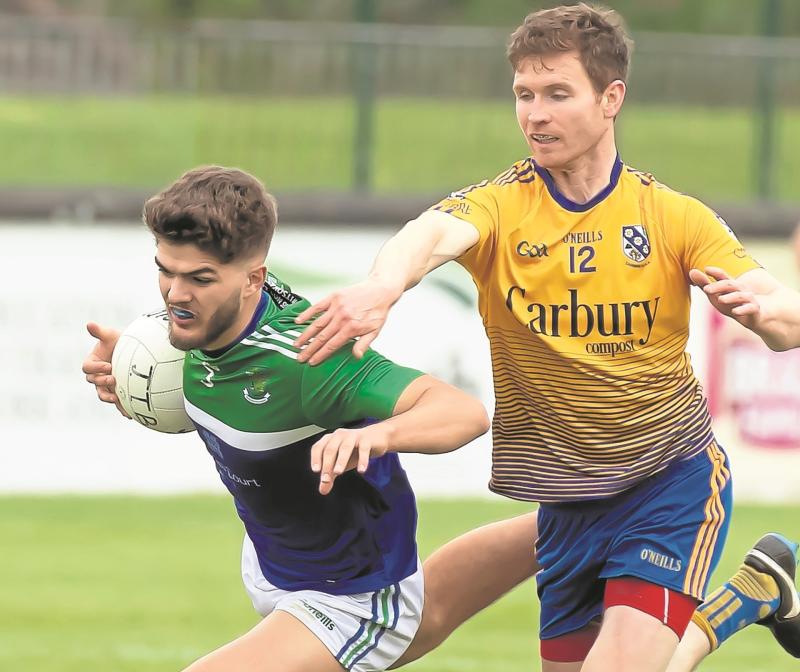 While the Preliminary Round of the Senior Football Championship was held some 20+ weeks ago, this weekend sees the opening rounds of the group games, so in effect the official start of the 2019 Joe Mallon Motors Renault SFC.
Incredibly in the last 20 years there has only been three finals without either Sarsfields or Moorefield involved.
In that period the Newbridge clubs have met in no less than seven times in finals and in that 20 year period Moorefield have been successful on nine occasions; Sarsfields lifting the trophy on six occasions; the other five titles in that period going to Athy, St. Laurence's, Celbridge, Allenwood and Round Towers.
No change in this season's format of the SFC, four groups of four with the top team after three games going straight through to the quarter finals, which, depending on one's point of view, can be a plus or minus.
The teams that finishes second in their group will then be drawn against teams that finished third (no repeat pairings); while the four teams that end bottom of their group go into relegation semi finals.

GROUP 1:
Champions, Moorefield, are seeking to make it three titles in a row, a feat last achieved by Sarsfields some 50 plus years ago, in fact it was 1950, 1951 and 1952, a different time, a different era, but nevertheless a marvellous achievement by any standards. Little did The Sash realise that incredibly it would be all of 30 years before they lifted the SFC Cup again.
No doubt there will be added pressure on The Moores, this time around, when they open their account on Sunday, ironically against fellow town team and arch rivals, Sarsfields.
Both Newbridge teams suffered shock defeats in the SFL semi finals just a few weeks ago; Moorefield failing to perform against Carbury taking a 15 point defeat while Sarsfields lost to eventual winners, Naas, by all of nine points, having conceded no less than four goals.
Moorefield and Sarsfields is certainly the eye-cather of the opening weekend and their league semi finals set-backs certainly adds some intrigue to this one.
Moorefield, up to that stage, had enjoyed more than a decent campaign while Sarsfields, under new manager, Davy Burke, took some time to find their feet under their new regime but have been steadily improving as the league went on.
Interesting to see how both teams line out for Sunday. Both were missing a few players one would expect to be on duty come the weekend although it has to be said that Sarsfields were hit by a fair few injuries prior to that game, whether those lads will be back on duty on Sunday we will have to wait and see.
Despite going for three titles in a row it would seem that Moorefield's biggest concern is actually getting their best team on the field and who exactly will line out on the day.
Some big decisions here for Ross Glavin and his selectors but while it is always difficult to predict a game between these two, Moorefield will go into this one as slight favourites and it if they can play to their best should have enough. However if the champions perform like anything resembling a display such as the one against Carbury, Sarsfields will prevail.
The two other teams in Group 1 are Two Mile House and Eadestown and while at the start of the season one would have expected Two Mile House to begin life in the senior championship with a win against an Eadestown side who have been struggling prior to 2019. However Eadestown held their own in the SFL Division 2 finishing in the top half while The House were just three points off relegation.
A vital game for both of these and there will be little in it but if The House have a full squad to choose from they just might get their first ever senior campaign off to a winning start.

GROUP 2:
Group 2 is an exact repeat of one of last season's group and will see Leinster Leader Cup champions of 2019, Naas, take on Castledermot, who gained promotion to Division 1 for next season.
Last season they drew 0-14 apiece and one can expect Castledermot to really give it their all in this one. Always a difficult to beat they will be buoyant having gained promotion as well as coming up as Division 2 champions but one has to expect Naas, provided they have not over done the Leader Cup celebrations, unlikely under the guidance of manager Niall Cronin.
This could be a closer than many might expect but Naas get the vote.
The two other teams in Group 1 are St. Laurence's and Maynooth.
When they met last term The Larries scraped through by just two points in a bit of a topsy turvey mixed game.
Maynooth have had a very poor League, being relegated without winning a game and it is difficult to see them getting the better of St Laurence's on that form.

GROUP 3:
Group 3 consists of Celbridge, Raheens, Confey and Carbury.
Celbridge take on Raheens on Sunday. The former just missed out on a semi final spot in Division 1 on scoring difference while Raheens enjoyed a good campaign in Division 2, gaining promotion to the top division come 2020. However the boys from Caragh lost to Castledermot in the Division 2 final and while it is always dangerous comparing league to championship, that particular day Raheens struggled, although dominating for long periods of the second half, to find the posts and if they are to have any chance here they will have to improve in that area.
Celbridge, now under former Dublin top player, Paul Curran, have blown hot and cold in the league at times but the quality of players at their disposal it is difficult to see anything other than a win for Celbridge.
Confey and Carbury is another big game to look forward to.
Confey struggled in Division 1 finishing just one place above relegation.
Carbury had a brilliant league and can count themselves somewhat unlucky in the Division 1 final, provided they have recovered from that set-back they should have too much for Confey on this occasion.

GROUP 4:
The final group in the senior championship sees Johnstownbridge, Clane, Athy and Round Towers and is a really interesting one.
Athy lost to Moorefield in last season's decider and will certainly be hopeful in making it to the business ends of the championship again this year.
Their opening opponents on Saturday sees them take on Round Towers who lost out to JTB in the Preliminary quarter-finals last season.
Athy looked to be on their way to a League semi this season but losing their two final games saw them drop to ninth in the table with ten points.
They really should have defeated Carbury in their final league game and that defeat just might leave a bit of a scar; a bit of concern .
Glenn Ryan's Towers had a decent Division 1 campaign, still in with a shout up to the last game and while they will always give it their all come the championship, it is difficult to see them getting the better of Athy on this occasion.
The second pairing in Group 4 sees Johnstownbridge take on Clane.
If ever their is a team that would break your heart when it comes to championship it is without question The Bridge.
A most talented team on paper they have some of the best club players around but don't always bring their best form to the table.
With a fair sprinkling of players involved with the county team finishing just around mid-table was probably the best they could expect but they did that with a bit in hand.
Clane, operated in Division 2 of the SFL and finished on top after the divide after a somewhat mixed campaign.
They took a big hammering last year against the same opposition, 6-13 to 0-13 and while one would expect them to be much more competitive this time around, nevertheless hard to see anything other than a win for Johnstownbridge, a game fixed for Saturday in St Conleth's Park.