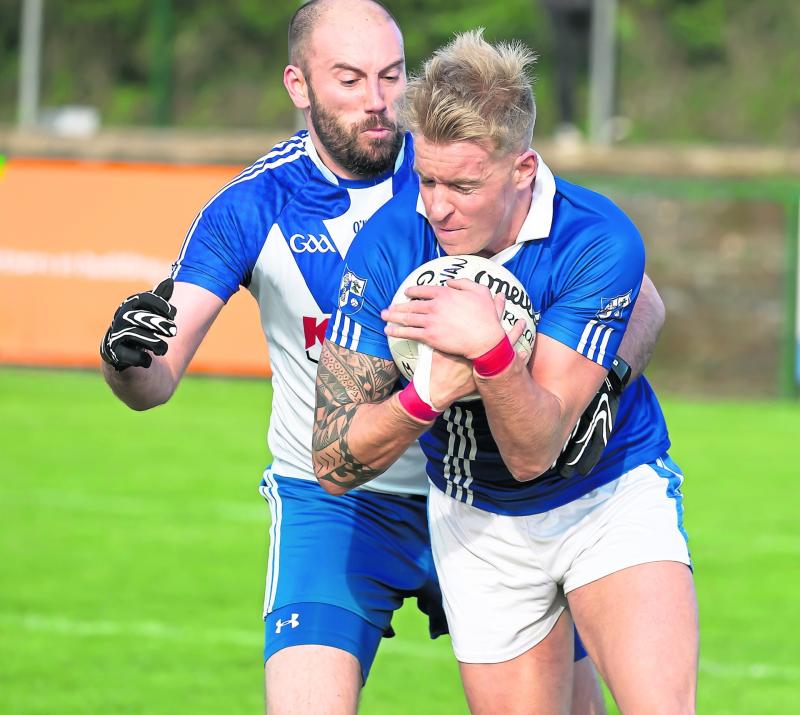 It is not today or yesterday that it has been acknowledged that winning the Kildare intermediate football championship is no mean or easy task. And when you look at the winners over the past ten years you can understand just why.
Teams that have won the intermediate in the last decade all still play in the senior championship with just two exceptions, Ballymore Eustace and Monasterevan.
And while Ballymore Eustace would be many people's fancy to clinch the Junior Championship this season, Monasterevan, recent winners of SFL Division 3, promoted as champions to Division 2 next season, are top of many folks list to go all the way in this season's Pittman Traffic Intermediate Football Championship, which gets under way this weekend along with the SFC.

GROUP 1:
Ellistown and Rathangan meet in this group, both having plied their league trade in Division 3 of the SFL in 2019.
Neither it has to said excelled; Rathangan finding the going extremely difficult, being relegated to Division 4 for next season, winning just one and drawing one.
Ellistown, though were just above the two relegated teams and will not look back on that campaign, apart from avoiding relegation, with any great memories
Not a lot between them it has to be said but a hesitant vote goes the way of Ellistown.
The second paring in Group 1 will see St Kevin's coming up against Clogherinkoe.
Kevin's reached the semi final last season but have had a very disappointing Division 2 League campaign, relegat-
ed to Division 3 while Clogherinkoe were at the opposite end of the same table and while they never looked like gaining promotion they did finish third, albeit some six points behind second place.
Clogherinkoe get the nod.

GROUP 2:
Nurney take on Kill in the opening game in Group 2.
Nurney got to the semi final last season going under to Two Mile House by six points. They enjoyed a decent Division 3 League this season, just missing out on promotion finishing in third.
Kill on the other hand played their League Football in Division 4, finishing mid-table.
Nurney get the vote to get this campaign off to a winning start.
The second pairing in Group 2 sees Leixlip take on Straffan.
This game on Sunday in Clane will see Leixlip attempt to make a quick return to the senior ranks having been demoted to this grade last term.
However the boys in maroon suffered another set-back in this year's league campaign, being relegated from Division 1 while Straffan, playing out of Division 3 finished in mid-table.
Leixlip will be anxious to get their campaign off to the a winning start and while they have been going through a tough time of late, nevertheless are given the vote to get the better of Straffan on this occasion.

GROUP 3:
Allenwood take on Sallins in these teams opening game on Saturday in Hawkfield, Sallins having gained promotion to Division 2 for next season and although they were well beaten in the League final by Monas-
terevan, nevertheless they will fancy their chances of taking the Johnny Doyle led Blues.
Allenwood finished some six points behind their opponents and while that cannot always be an indic-
ator come championship, nevertheless the vote goes to Sallins, who were missing a couple of vital players in that League final.
The second game in Group 3 sees Suncroft and last season's Junior cham-
pions, Milltown go into battle.
Milltown have had a tough league campaign, winning just two games, drawing two in Division 3 and will move to Division 4 come 2020.
Suncroft played in Division 4 this season, winning the Shield final against Ardclough but with Fionn Dowling back playing after a prolonged injury spell, they will be hoping to get their championship season off to a winning start
Probably not a lot between them but a slight preference goes to the boys in green and red.

GROUP 4:
The final of the four groups is certainly an intriguing one with Kilcock, Ballyteague, Monasterevan and Kilcullen.
The opening game sees Kilcock take on Ballyteague (both went out at quarter finals last season); playing in Division 2 they will know one another well and both will be expecting to make a major impact in this season's championship.
Regardless of who wins this one both can have a major say in the champion-
ship but on this occasion the vote goes to the Jimmy Hyland led Larks to open with a win.
The second game of this group will see two Division 3 teams clash, Monasterevan taking on Kilcullen (quarter finalists in 2018).
Monasterevan, defeated in last season's final by Two Mile House, gained pro-
motion for next season to Division 2 and having seen them defeat Sallins in that final a few weeks ago they looked more than a decent side with a few of excellent players including Padraig Nash and Ryan Bannon.
Kilcullen finished in the bottom half of the same division and it is difficult to see them defeat a Monasterevan side who expect to be right there at the business end of this season's IFC campaign.