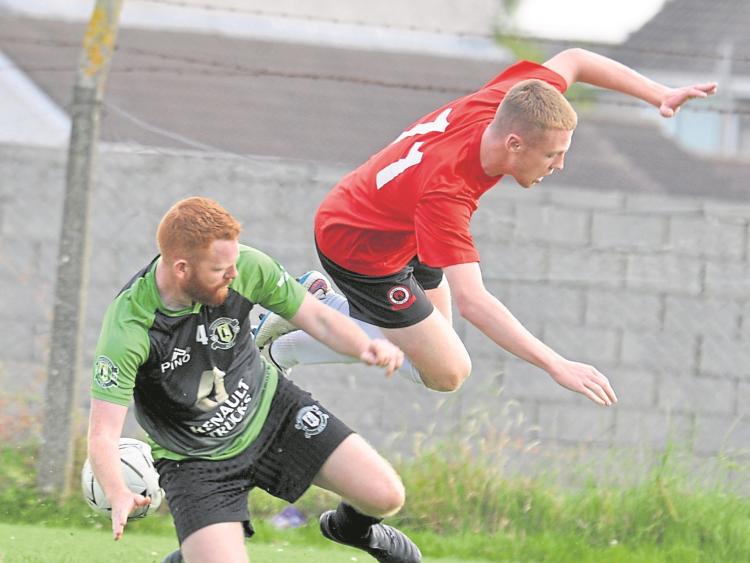 League newcomers Newbridge United FC from Division 3 traveled to Premier side Monasterevin AFC on Sunday for their first-ever Lumsden Shield tie in the opening round of the Ben Moran League Shield but came away with a 3-1 defeat.
The game started in very warm, sunny conditions but the skies gradually became more overcast as the tie progressed.
Throughout, the two teams were evenly matched, despite playing in two different divisions. Newbridge United FC got off to a good start after five minutes when Patrick Bolger tested the Monasterevin keeper from distance.
At the back United’s Liam Kelleher and Austin Egan stood firm as Monasterevin repeatedly drove down the left wing. Up front on his own, Conor Feane was tireless in his pursuit of the ball and had a gallant attempt on goal saved by the Monasterevin keeper after ten minutes.
At the other end, Odhran Mullins was on hand to deny a scoring opportunity for Monasterevin. Newbridge then were awarded two free kicks in quick succession, almost scoring the first in the 20th minute. However, they converted the second, with a low drive by Patrick Bolger that was turned into the net by the ever-industrious Darragh Millar to put United 1-0 up.
The game had to be stopped for a change of keeper after the Monasterevin keeper pulled a muscle when racing out to whip the ball away from Odhran Mullins.
Not long after, Mullins left the field with an injured shoulder and was replaced by Seán Byrne. The game ebbed and flowed, with neither team getting much of an edge on the other. NUFC's trio of Darragh Millar, Ronan Whyte-Dooley and Patrick Bolger dominated midfield, forcing Monasterevin to attack down the wings.
Monasterevin subsequently upped their game and applied more pressure as Shane Kevin and John Bannon began exerting pressure in midfield and traded passes to release Binions whose cross just evaded the onrushing Podge Casey.
Chris Boshell and Binions were now starting to find joy down both flanks for Monasterevin teasing crosses into the Newbridge box after good footwork.
A Kevin free from wide just evaded Bannons head as Monasterevin looked to up the tempo.
Simon Lutrell blasted over from distance before more good interplay from him and  Binions saw Bannon control and spin neatly with his back to goal to fire a shot low and hard across the Newbridge keeper to equalize just before halftime.
The second half saw more of the same from both sides with Newbridge United’s young players looking to attack on the counter. Monasterevins fullbacks Ross O' Donoghue and Dave Kirwan made way for Liam Allen and Conor Veighey as did winger Boshell who made way for Hayden Kemmy.
Binions and Allen were now driving Monasterevin forward, winning primary possession and overlapping well past Kemmy and Luttrell but all too often the final delivery was too close to the Newbridge netminder.
The visitors themselves were finding space through midfield as the Monasterevin changes took time to settle but more shots from distance failed to trouble Delaney in goal.
Excellent one and two touch interplay from Binions and Luttrell saw the former have a cross deflected behind for Monasterevin who were now racking up the corner count.
Kevin exchanged kicking duties with Binions and his left foot delivery found the right foot of the coolest man in the box in Conor Veighey who turned his volley first time to the back of the net to give Monasterevin the lead at 2-1 midway through the second half.
Bannon saw a freekick just fly over the Newbridge bar as Lutrell and Kemmy posed threats out wide as the game wound down but clearcut chances were at a premium as the warm conditions took the sting out of the latter stages.
Binions and Lutrell combined well again to earn another Monasterevin corner. Kevins whipped delivery again found its intended target as Conor Ryan rose well to power his header into the back of the net to see the home side go 3-1 up.
With minutes to go NUFC tried hard to pull one back with an overhead kick from Liam Kelleher which flew over the bar.
Best for the winners were Arnie Cullen, Glenn Binions and scorers Veighey and the evergreen Bannon.