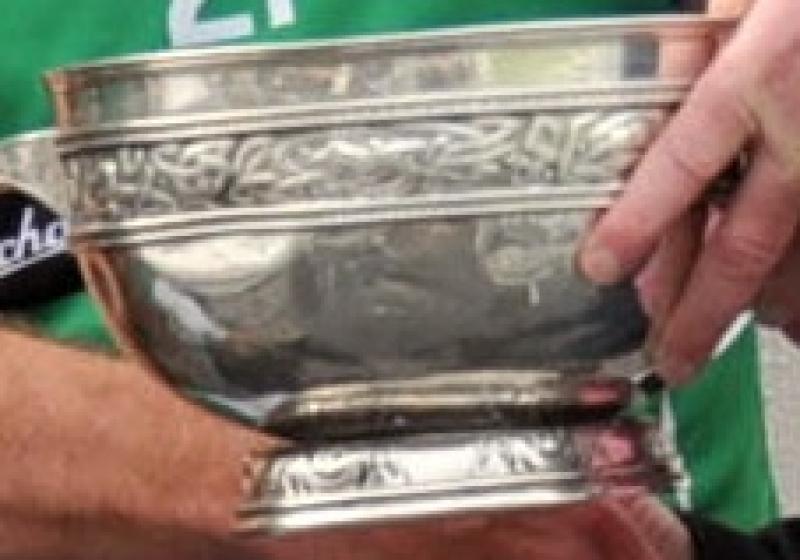 The 2019 Leinster Leader Cup (LLC) final between Carbury and Naas on Sunday is the 100th final in the life of this prestigious competition. The trophy was presented to the Kildare County Board by the local newspaper for an annual competition. It is made of solid silver and no machinery was used in the making of the cup.  It is a replica of the Ardagh Chalice, just like the Sam Maguire Cup which was won by Kildare for the first and only time in 1928. It was first played for in 1920 and was won by Caragh, albeit on 17 April 1921.

Kilcullen was the venue on Sunday of an interesting football match when the Naas Co. Champions met St Conleth’s in the first round of the “Leinster Leader” Cup. An interesting exhibition was witnessed by a large gathering of spectators, Tynan for Naas showing up well in catching. In the first half the champions showed a marked superiority and turned over with a score of 1 goal and 1 point to nil.

In the second half the St Conleth’s representatives got going and their defence foiled all attempts on the part of the Naas men to get through, while from a free Coffey for the “Saints” shot a fine goal. With only one point between the teams at this stage, speculation was rife. Some good exchanges were witnessed. Naas pressed and were rewarded with a point. The pace was now very fast and telling its tale, and still keeping up the pressure Naas scored two further points. Shortly after that the final whistle went leaving Naas winners on the score: NAAS 1 goal 4 points: ST CONLETH’S 1 goal.

The game was not without controversy, and the reporter was not impressed!

The matches were not started for over an hour after the scheduled time. This was due, I understand, to one of the cars conveying the Naas footballers meeting with a delay on the way. The result, however, was that the hurling teams who were on the field before the scheduled time for their match suffered by the abandonment of the hurling. … The whole thing was most regrettable and hardly calculated to encourage patronage of Gaelic fixtures. It would be well if teams now that the evenings are so short allowed themselves a margin of half an hour, say, from the scheduled time in arriving on the field. This would avoid many of the delays which are far too common a feature of Gaelic fixtures. (Leinster Leader 13 November 1920).

There was a sequel to the first Leader Cup match as reported in the Leinster Leader on 8 January 1921. St Conleth’s objected to Naas on the grounds “that Mr. Peter Tynan was not eligible”. A statement was made that he “had played for Wicklow County in the 1919-20 period and was not therefore eligible to play in the match under discussion”. It was also alleged that he played with Baltinglass in the Wicklow county final. Peter Tynan said he was living in his home in Portersize in Kildare and in Wicklow for some time before going to Belfast for six months on business. The Chairman said the County Board gave permission to Mr. Tynan to play with Naas and that Naas should not be victimised. In conclusion, the player said he did not see how the objection could be sustained, and it was then withdrawn.

Mr. Lalor who refereed the Maddenstown versus Eadestown game reported that he “received a lot of attention from the followers of Eadestown” and that James Walsh had used “abusive and threatening language during the match”.

The player vehemently denied this: “I think you brought the wrong man up this time” to which the referee replied, “I am very sure I did not” adding that if the matter were postponed, it could be easily proved.

The Chairman took control saying he did not wish to argue the matter and as it was the beginning of the new year, he “hoped they would all work in the interest of their clubs and of the Association itself, and that would be the spirit for the coming year. Let our games be a credit. I ask you at the beginning of the New Year to forget” to which both the referee and the player agreed.

There was a very large and interested gathering at the Dominican College Grounds, Droichead Nua, on Sunday to witness the first meeting for the beautiful silver cup presented by the ‘Leinster Leader’ to the Cill Dara Co. Committee GAA. The county of the Short Grass was represented in great numbers as well as Leix and Dublin.

The contest was very keen and kept the spectators on their toes throughout the hour. However, the power of the Caragh men was too much for the Naas players and they outscored the men from the county town.

Immediately after the match was over the large gathering on the field witnessed a very interesting ceremony when Mr. Brophy, the popular Chairman of the County Board of Cill Dara in a few encouraging words congratulated the winning team and handed over to them through Mr. Buckley, the captain, the beautiful silver cup which had been presented by the ‘Leinster Leader’ and which had been won by Caragh after such a splendid contest with Naas that day.

“Had Ardclough had accurate forwards in this Leader Cup final on Sunday last, they would have had a bag of points, but on every occasion that they got within easy scoring distance they sent the ball wide”. It was not expected that Raheens would put up such a strong front, and the recent defeat of that team in the SFC put a damper on the enthusiasm of the players. Added to this was the absence of one of their best players, John Collins, whose father had died that morning.

Raheens introduced some young players who made a great impression and they were first to score with a well-taken point. Ardclough pressed and “the ball for some time was kept in the enemy’s territory, but without result”. Raheens dominated the exchanges and had two more points to Ardclough’s one before half-time.

The second half was evenly contested and although “both sets of players brought the ball very often near their opponents’ citadel the attacks ended without any result”. Raheens added a fourth point well on in the half and deserved their win despite Ardclough’s efforts to secure a goal to draw the match.