Racing: A King George well worth waiting for

Can enable join Dahlia and Swait as the onlyt wo-time winners of The King George and Queen Elizabeth Stakes? 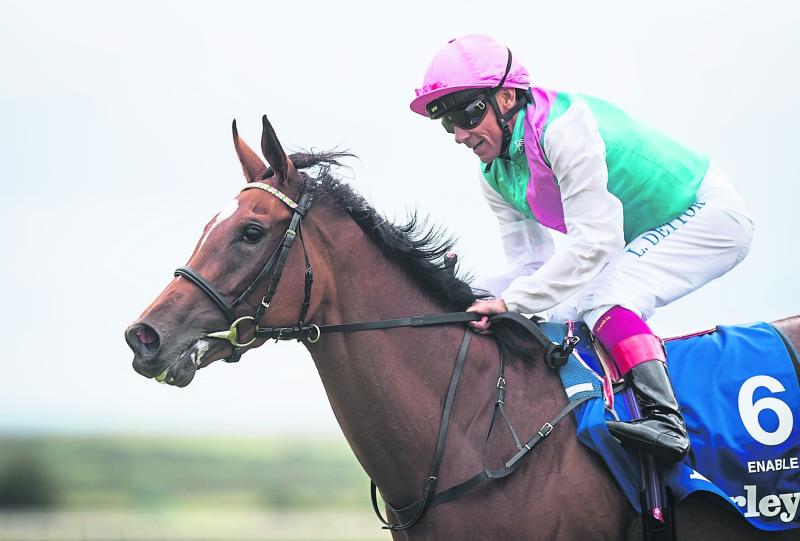 There are sometimes in racing when you remember where you were when something special happened.
When Sea The Stars won the Eclipse Stakes, that was a perfect example.
Last Saturday’s Eclipse Stakes winning return of Enable was another prime example. That tenth consecutive victory now means that she’s back with a bang and on course for the King George VI & Queen Elizabeth Stakes in 18 days time, a race she won in emphatic fashion two years ago. But can she join Dahlia and Swain as the only two-time winners of the race against arguably her toughest set of opposition yet?
That’s what we’re trying to find out this week.
The bizarre fact about Enable’s ten career wins is that they’ve all come at different tracks. That in itself takes some doing.
Eight of those wins have come at Group 1 level and they include races such as the Prix de l’Arc de Triomphe (twice), the Breeders’ Cup Turf and a King George VI & Queen Elizabeth Stakes. That’s not to forget that she’s a dual Oaks heroine too.
In beating a primed Magical last Saturday on her seasonal reappearance suggests that Enable is as good, if not better than ever, and it will take something special to beat her.
Many thought that Sea Of Class, the horse which so nearly beat Enable in last year’s Arc, was the only one capable of lowering her colours.
Obviously, she doesn’t run now so where do we look to for a genuine threat to Enable’s crown?
Well, luckily there are a few places to look.
The betting suggests that Crystal Ocean is the biggest danger to Flat racing’s marquee mare. He broke his Group 1 duct at Royal Ascot when he beat Magical by a further margin than Enable did. He also did that when giving Magical weight too. So on that basis, you could see him beating the favourite, right?
The one time Crystal Ocean faced Enable however, she beat him hands down. That was at Kempton when he was giving her 8lbs but she was having her first run in almost a year.
So, can he beat her two weeks’ on Saturday when he’ll be 5lbs better off? That’s the key to the race.
Ballydoyle have been a big part in most ‘King Georges’ since Galileo won the race in 2001, one of the best finishes the race has ever seen.
That was Aidan O’Brien’s first triumph and he’s won it three times since. In recent years, he’s depended on his older horses to give him big race success but this time around, it appears as though he’s going to throw his two Derby winners into the mix.
Anthony Van Dyck would appear to be the Ballydoyle number one hope despite his Curragh blip but does he look good enough to win a race of this calibre?
What about Sovereign?
Will he be allowed to dictate like he did in the Dubai Duty Free Irish Derby?
If he is sent out in front, we’ll most certainly get to see if his win at the Curragh was a one hit wonder.
Remember, three-year-olds don’t have a great recent record in the race either. Just four triumphs for the Classic generation in the last 15 years.
Defoe has been the vast improver of the older horses this season and his victories in both the Coronation Cup and the Hardwicke Stakes must surely give him an excellent chance of glory. He’s got a mountain to climb of his run behind Enable in last year’s Arc but he’s a different horse now.
The same owner won the 2015 ‘King George’ with Postponed and it’s safe to say that Defoe has better form heading into this year’s re-
newal. If Japan took his chance, then he’d be a massive threat to Enable given that John Magnier has gone on record to say that he’s ‘the best three-year-old’ that Ballydoyle have. He’s apparently bypassing this race though.
Last year’s Epsom Derby winner Masar isn’t out of it either. He’ll be expected to improve from his run behind Defoe at Royal Ascot and he’s one of the few horses in the race which Enable hasn’t beaten yet.
Growing up, for me, the King George VI & Queen Elizabeth Stakes was the race of the summer. Nothing ever came close. On July 27, I think we’ve got another brilliant summer showdown on our hands.