No short, back and sides for these Kildare footballers 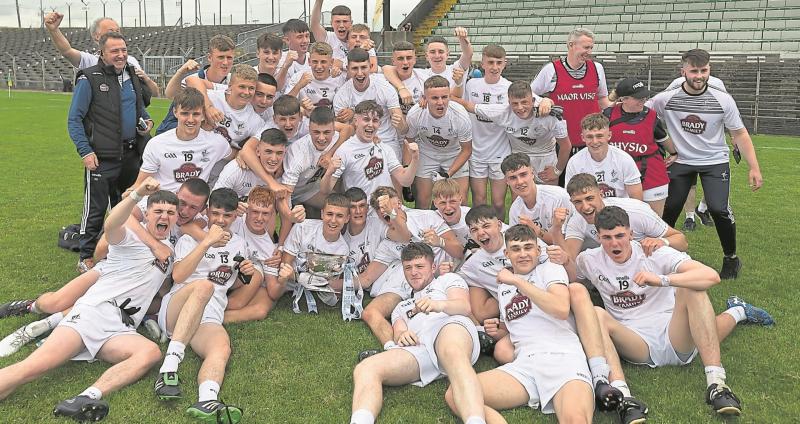 Are we going to a Saturday afternoon disco or a Leinster minor football final I wondered to myself as we entered Pairc Tailteann on Saturday last.
The music was blaring and the decibels went up the nearer we got to the turnstiles.
Our worse fears did not come to pass, luckily enough, as we soon realised that the 'bang bang' music was coming from the temporary barbers set-up by Leinster MFC sponsors Electric Ireland where, male and female fans, could get a 'Championship Haircut' and buckshee at that.
And this wasn't just a short back and sides job.
Absolutely not.
One could get a ‘The Football Flick' or 'The Crossbar Shave’ or 'The All Rounder' or indeed 'The Minor Face.'
The ladies could go for an 'updo' or 'braid, styled with ribbons' depending on the taste.
Holy God I say to myself, things have moved a long, long way from the time I would call in to the grand dad and the uncles for a quick (and I mean quick) short, back and sides at their barber's shop opposite the Town Hall in Naas.
There were no fancy cuts there I can tell you. I remember on one occasion asking one of the uncles (the late Kevin) could I have a 'square' finish at the back. His reply, not surprisingly, was quick, sharp and to the point.
“You'll get the same as everyone else, short, back and sides.”
Little did he know that while the short, back and sides went out of fashion, that particular 'style' was to return in latter years and I can tell you it cost a lot more than the 6d, or was it a shilling back then; mattered little to me as I never paid anyway!
One thing Callaghan's Barbers were very well know for was a window sign. It simply read: We need your head to run our business.

And last weekend the minor footballers from Kildare certainly used their collective heads to get the business done.

And the icing on the cake of course was their opponents were the boys with the slickest haircuts; the lads with The swagger. The confidence. The coolness. The belief.

All there and ready to take another minor title back to the Capital.
Nevertheless we have been told by The Lilies boss man, Colin Ward, on more than occasion this year, “there is a lot more in these lads.”
We did not disagree but being one of the Doubting Thomas' Brigade I just wondered. Quietly.
Having seen them in all their group games and the semi final, it was hard to have the belief that Colin had.
The game itself was an absolute cracker.

It was a game that reminded us that football is still a mighty game when played in the right manner, the right approach and the right frame of mind.

No blanket defences here, two teams that displayed everything that is positive about the game.
You know the more you think about it the more you realise that what has changed football, in fact one could say what has (practically) ruined football over the last decade or so, are the coaches and the managers, whose fear of losing has turned the game upside down to such an extent that rules are being changed, year on year, to try and counteract the negativity.
All I can say on that is just ask anyone who was at Navan on Saturday, including the losing Dublin fans, everyone came out with same the mantra: what a brilliant game of football.
If only the game was played in that manner day in, day out, regardless of the grade, club or county.
Kildare and Dublin served up over 100 minutes of sheer brilliance. A major hold-up for injury to Dublin's no. 6 who was stretchered off with what looked like a head or neck injury, but delighted to report he is up and about and is ok.
Extra time added to the excitement and while, from a Kildare point of view, it should never have gone to that, nevertheless it simply brought out the best in the boys in white.
A goal at the start, and the end, of the opening half of extra time, saw The Lilies over the line in dramatic fashion.
No matter what else is going on in the county, the underage set-up is proving so beneficial that is hugely encouraging, to use that horrible phrase 'going forward.'
From a Kildare point of view there were so many stars, so many great performances that it is bordering on the unfair to name a few at the expense of others.
It's always interesting to see how many lads on a successful minor team progress to make it at senior level. Usually four, maybe five you're doing well, but on Saturday's display that number could be higher.
Few if any player looked out of his depth from no. 1 to no. 15 while the boys from the bench all played their part.
The young Lilies proved that not only can they hold their own in the hair fashion stakes with the City Slickers, but, at this level at least, they can more than hold their own when it comes to performances on the field of play.
Four Leinsters in seven years.
Six final appearances in the same period.
Add in a Leinster U20 title.
Add in an U20 All Ireland, just 12 months ago, and there is no doubt there is a lot to look forward to, provided the right people are put into the right positions to influence the growth, influence the talent that is undoubtedly there.