Navan the venue for provincial final on Saturday, 2 pm 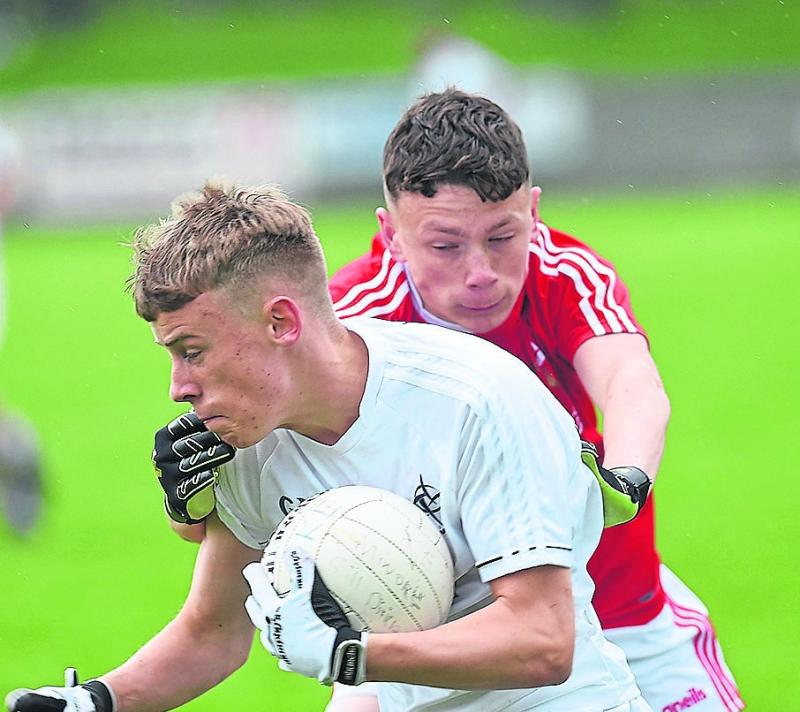 Mark Maguire, Kildare, in action against Patrick Murtagh of Louth in the group stages of the Electric Ireland Leinster Minor Football Championship

It really has been a golden era for Kildare when it comes to minor football and on Saturday The Lilies line out at Pairc Tailteann, Navan, taking on Dublin in the electric Ireland Leinster Minor Football Championship decider, a game that throws-in at 2 pm with Carlow whistler David Hickey in charge.
Incredibly this will be Kildare's sixth final in seven years, winning the title in 2013, 2015 and 2016 defeating Westmeath, Longford and Laois respectively in those games.
Dublin on the other hand have played in two finals in that six year period, winning both defeating Kildare in 2014 and Louth in 2017.
Minor football is now of course played at U17 and whether that is a plus or a minus is difficult to say at this time.
Dublin will be seeking to make it no 34 Leinster minor title, winning their first back in 1930 while Kildare will be hoping to make it title no. 9, while they did not win their first title at this grade until 1973.
So what can we expect on Saturday?
Well both teams have come through their respective groups with relative ease.
Kildare emerged undefeated after defeating Wicklow in Newbridge in their opening game, then travelling to take on Louth away, a game where they showed a fair bit of promise before heading to Nowlan Park in Kilkenny taking on 'The Cats' which told us very little as Kilkenny, as one would expect, are very weak, despite the great hurling man DJ Carey taking the footballers from his native county under his control.
Dublin on the other hand emerged from a group that included Wexford, Offaly and Meath.
Kildare went straight through to the semi finals where they took on Laois, in Portlaoise while Dublin had to play Wicklow in the quarters before taking on Westmeath in the semis.
Dublin had to use all their know-how to advance to the final, Westmeath putting it up to the Metropolitans before finally getting the better of them.
Kildare, on the other hand played Laois in their semi final, a game that saw both sides start very nervously indeed.
It took Kildare all of nine minutes before Aaron Browne finally raised a white flag for the visitors and while top marksman on the evening, Eoin Bagnall doubled that lead in the opening quarter, Kildare still only led by two despite dominating most of that opening 15 minutes or so.
Kildare were looking in control at that stage, 17 minutes and the home side yet to score but that all changed when Oisin Hooney used his strength to brush off a weakish challenge to blast the ball past Kildare keeper Cian Burke of Clane.
That goal not along lifted the home supporters but also the home players and they were level as half time approached.
Laois went into the break leading by one and no doubt feeling well satisfied having been so much under cosh for a lot of that half.
Gradually Kildare took control around the middle where Kevin Eustace (St Laurence's) and Shane Flynn (Balyna) exerted their superiority and with Eoin Bagnall in superb form, hitting eight points in total, they gradually pulled clear, eventually booking their finals spot on a final score line of Kildare 0-12 to 1-6.
The score line probably does not do Kildare justice as they were certainly worth a lot more than the three point winning margin in the end but no doubt there is a lesson there for Colin Ward, Kildare's manager and his players as failing to convert, failing to take opportunities can prove fatal times.
While very happy to see his side make it to another provincial decider, Manager Ward was not particularly satisfied with his side's overall performance.
“Happy to get to the final of course, but to be honest overall we were poor, very poor tonight” he said after the game, adding “but semi finals can be like that, they are all about winning, the performance comes second to the result but ten wides in the opening half is still a worry and we will have to improve in that regard for the final” said the St Kevin's man.
The Kildare manager and his selectors were in attendance to see Dublin get the better of Westmeath, as it was played a few days after the Kildare v Laois semi, so they will have a fair idea of what to expect.
Not an overly big side, Dublin, play the type of football we have come to expect from the Boys in Blue.
Decent defence, strong around the middle and when in possession attack in numbers and a pace.
If Kildare are to take the title they will need to get a better spread of scorers and don'e be relying the accuracy of Eoin Bagnall, whose seven of his eight points in the semi final came from frees.
Still they are decent at the back, where Jack Quinn (Leixlip) is playing well as is Tommy Gill of Carbury.
Mark Maguire (Naas) has caught the eye on a few occasions with his tigerish carrying of the ball out of defence setting up a fair few attacks.
Decent in the middle where Kevin Eustace and Shane Flynn should hold their own.
Up front, apart from Bagnall, Aaron Browne and Oisin Milmoe are capable footballers while Adam Conneely saw a lot of ball, particular in the opening half, it was not until the second that he made that possession count.
It will be interesting to see how The Lilies will line out but they are a well prepared side, with manager Colin Ward and his backroom team of Micky McGuigan, Liam Carroll, Jim Bergin, Mark Fitzharris, Sean Dunne, Robert Murphy  Thomas Redmond, Shay Sargent, have prepared their squad well as they bid for yet another championship title at this level.