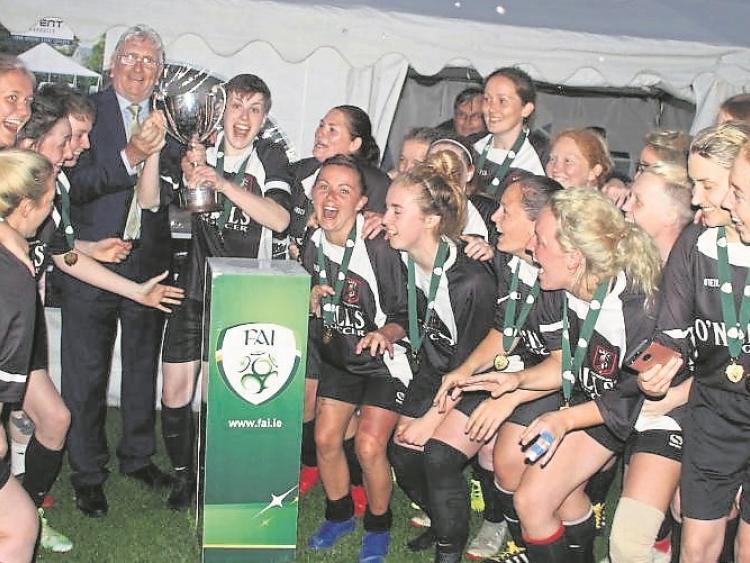 The Kildare & District Football League captured the FAI Angela Hearst Women’s Inter League trophy for the first time in the League’s history and in dramatic fashion last week at University of Limerick.
The game finished 1-1 after extra time and Kildare proved the more accurate under pressure against the Wexford Women’s Soccer league in the penalty shootout to win 4-2 on spot kicks in front of a large crowd.
Kildare having defeated The Galway League and holders The Cork Womens Soccer league en route to the Final were not taking anything for granted going into the game against the WWSL.
The Dave Morey managed side began the match brightly in the sunshine in Limerick and Stacey Harris was proving a handful for the Wexford defence. She found a pass from Laura Mathews and tested the Wexford keeper Megan Butler with a near post shot in the early stages but the Wexford side grew into the game as the half progressed.
The Kildare centre back pairing of Joanne Kelly and Sarah Lloyd O’Neill were required to be alert as Wexford looked to utilise quick counter-attacking play.
Portlaoise AFC stopper Aimee Keane was dealing comfortably with any attempts on the Kildare goal while deliveries from Brooke Dunne and captain Jess Turner were proving to be a real threat from set-pieces.
Tara Jacob and Lorraine Foran were getting through a lot of work but space was at a premium in midfield. Dunne and fellow midfielder Orlaith White both went close from Turner crosses but just before half-time the deadlock was broken.
A deep corner to the back post from Turner on the right was met by Dunne who powered a header into the roof of the net from close range putting the KDFL side 1-0 up going into the break.
The Wexford side started brighter in the second period and were rewarded with the equaliser in the 54th minute. Centre back Laura Stafford got on the end of an excellent free-kick played dangerously behind the Kildare defensive line and converted beyond Keane to make it 1-1.
The KDFL team needed to show some resilience at this time as Wexford had the momentum. Sinead McBride and Danielle Dempsey were introduced to gain a little more control but the performance of Player of the Match Aimee Keane was key during this period. She made a number of great saves typified by a brilliant sliding block on the edge of the box in the 69th minute.
Wexford went close with a free-kick in the closing stages but Kildare finished strongly. White headed just over from a corner and Harris had a goal-bound effort clawed off the line by keeper Megan Butler.
Extra-time was a tight affair. The physical toll was telling on the players. Dempsey was threatening down the left and McBride was dictating play in midfield.
Neither team could find a breakthrough and so it was left to penalties to decide the victor.
Amanda Duffy who was excellent at right back all evening was first up and smashed her kick down the middle. Keane saved Wexford’s second penalty to her left to give her team the advantage. Dunne scored in the top right corner and Wexford hit their third penalty wide of the post.
Turner found the top left to make it 3-1 with the KDFL on the cusp of victory. Wexford converted their fourth giving McBride the chance to win the final. She calmly slotted it high to the keeper’s left to the delight of the large Kildare following.
Heroic Aimee Keane in the Kildare goal was the player of the match.
The Cup was presented to Captain Turner by members of the Hearst family.