Having come through a tough time during the recession, Newbridge GC continues to grow 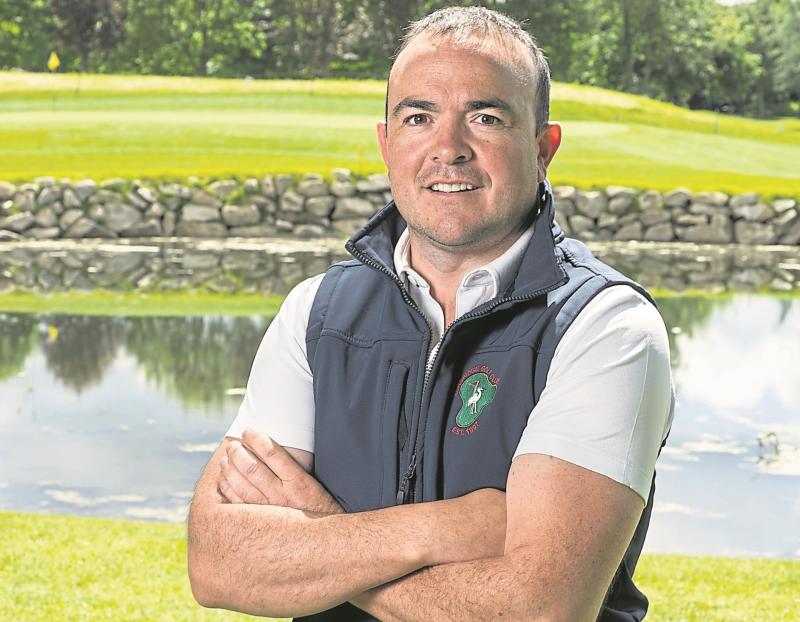 Hard to believe it is now all of 26 years since Newbridge Golf Club came into being.
It was 1993 when the Stafford family farm was converted into a 9 hole golf course, and just four years later that 9 became 18, along with a new clubhouse, as Jamie Stafford, Proprietor, explains.
“The course, mainly built by dad (Eddie), the designer was Pat Suttle and it was 2000 when I came on board full time.”
Since then, continues Jamie, we upgraded the greens, redesigned holes; built a new club house in 2008, all before the recession hit in.
Like all golf clubs the downturn hit Newbridge hard but even during that tough and turbulent period the Stafford's did not stand still and continued to improve various aspects of the course.
“People love to see things change, it is a sign of progress, regardless of what it is; let it be a tee-box, a water feature, a bit of drainage, we always did something no matter how tight things got.”
Jamie's dad, Eddie has been a hands-on person and a big influence down the years, confirms Jamie.
“Dad has a huge input into Newbridge; he is now in his mid-70s, opens up every morning; he loves the place; fit as a flee, I hope if I ever get to that age and if I look half as good and as fit as he is I would be more than happy.
“He is one of the main reasons how we got through the recession, supporting every aspect; he never had it easy growing up , he is a worker, he never stops, is always positive which has been an enormous boost to us all, especially during the tough times.
“My wife Sinead started working here six or seven years ago and has brought the family aspect of every-
thing here to another level and again a huge help during the tough times, while Josie (Talbot) and Stella (Conlon) have been with us a long time now and are very popular and valued members of staff.
“Recently we played an inter-club team and one of the visitors remarked 'when I walked into the club house it felt like I was walking into my sitting room' he felt that much at home and I take that as a real proud thing; really proud of that” said Jamie.
In a three year period between '94 and '97 Newbridge planted 14,000 trees, they have matured now and over the last six months or so a major thinning out has been taking place, leaving the best of them and letting them thrive, which leads Jamie to retort “I have a little log business now from all the trees we cut down.”
Like a lot of things in life one person's ill luck is an opportunity for someone else and when Woodlands GC closed down Newbridge picked up a lot of their members.
“We were very lucky the members we got when Woodlands closed; we got some really good members; committed people who got involved in the club, one of them being Jim Russell who is this year's Captain; all great people.”
While things were going along ok, without being spectacular Jamie Stafford was anxious to keep the improvements and the upgrades going so he approached some of the members, as he explains himself.
“In 2017 I approached Jim (Russell) and Ollie McGuinness, vice captain, along with some of the ladies, Phil McDonagh and Betty Miley and I just said to them 'I need help' — simple as that — telling them and I needed to put the membership fees up drastically if we are to progress and build the club, although I always believed, and still do to this day, we have one of the best value memberships around, but while we are gaining new members we are also losing members. And so a group within the club was formed and named 'Newbridge Golf.'
This is a group of members, along with the owners, who have come together for the betterment of the club and from that grouping a three year plan was put on the table.
“Newbridge has gone through this recession; we are out the other end” said Jamie, adding “ we still have the numbers we had; the course is improving year on year; the trees growing; I am still learning as a green keeper every year how to make the place better and 'Newbridge Golf' decided on two initiatives.
The first was to run a Golf Classic; the second , to hold a weekly draw known as The Joker.

On the Classic initiative the aim was to get some 70 teams involved; an ambitious number by any standards.
As Jamie remarks “we felt that looking for 70 teams was highly ambitious; most of the big classics here, fund-raisers etc. would be happy with 30 or so teams but we aimed high at 70, we got 70, then 80, then 90, ending up with a staggering 108 teams participating in a memorable weekend of golf; it was mind blowing, the support we got was amazing; everyone came on board making it an absolute outstanding success.”
And so after that highly successful fund raiser Newbridge went about their no 1 aim, building a new 9th green, along with various other improvements.
The new green, a beautiful elevated green; fronted by a spectacular water feature has drawn enormous positive comment from members and visitors alike, since it was opened just a few weeks ago.
Built by Dara Golf of Baltinglass, it is a significant investment and one Jamie hopes will finally put to bed malicious rumours that have been circulating in the area concerning the future of this most progressive of golf clubs; rumours that have absolutely no foundation, he adds emphatically.
“This year we are in Phase 2 of the Plan, which are centred around the last six holes; we have big plans for the 18th hole and the 2nd also as we continue to invest and improve our facilities here.”
The plan for Newbridge Golf Club is the annual fee to stay as close as to what it is, the target is to be up 20 members year on year; the golf Classic to be a success along with the weekly 'Joker' and while the club lost some members this year, they gained in excess of 60; so everything is on track at this stage.
Talking to Jamie Stafford one can immediately get his love of the place; the enthusiasm he has for Newbridge Golf Club as plans are seen coming to fruition.
“There is just that feel that Newbridge is going somewhere again,”he says, “it was always there, there was always improvement but now we're stepping up.
“This year is all about building on last year, along with some small jobs but we have one really nice project for the 18th hole we hope to do this year; next year a big job on the second but remember it is not just a three year plan, it is really a rolling over plan” he adds.
We meet once a month with Newbridge Golf and everything is really positive.
So in ten years time where do you see Newbridge Golf Club we ask Jamie.
Sitting here where we are having a cup of tea with Tommy Callaghan, he laughs.
“But really in the recession years, something was always knock-
ing you back; the banks were knock-
ing you back; you're fighting all the time but you just have to keep hanging in there and with the magnificent support we have from my dad, my wife, all the family and the members, we have come through it.
“When things were really tough it reminds me of when you are playing golf; and you are not playing well at all but then you say to yourself, the back 9, it will all come good on the back 9; like in poor times you would say, hang in, lets get into 2010, lets get into 2011, things will improve but there is no injection coming into golf so again you are just keeping going but 'Newbridge Golf' has brought life back into the place; everyone is talking about the new 9th green; everyone is talking about the future plans; people are excited but you can't be having plans without having funds.
“Membership is €789 all in; the same as the last few years so the members are getting a better and improving project for the same price but we are again asking them to support the Classic and the weekly 'Joker'.
On the inter-club scene Newbridge has had success winning the Provincial Towns ten years ago and then last year winning another pennant when Ozzie O'Toole managed a team to win the Pierce Purcell.
“We are a small enough club but have golfers in every level; we qualify for Senior Cup, Barton Shield, Junior Cup; Leinster semi finals of the Mixed Foursomes but the real beauty of Newbridge Golf Club is there is no politics; there are no cliques; no egos, people come down here to enjoy themselves, enjoy their golf and that is what the real selling point of Newbridge is; we are not into rumours and all that sort of stuff; play golf, enjoy golf, and long may that continue” said Jamie.
Somehow or other one gets the feeling that with Jamie Stafford, dad Eddie, and all the family input, along with its loyal and growing membership base, Newbridge Golf is going in only one direction, onwards and upwards.
We wish them well.