Kildare's Ollie Crinnigan and how he bagged the No. 1 shirt 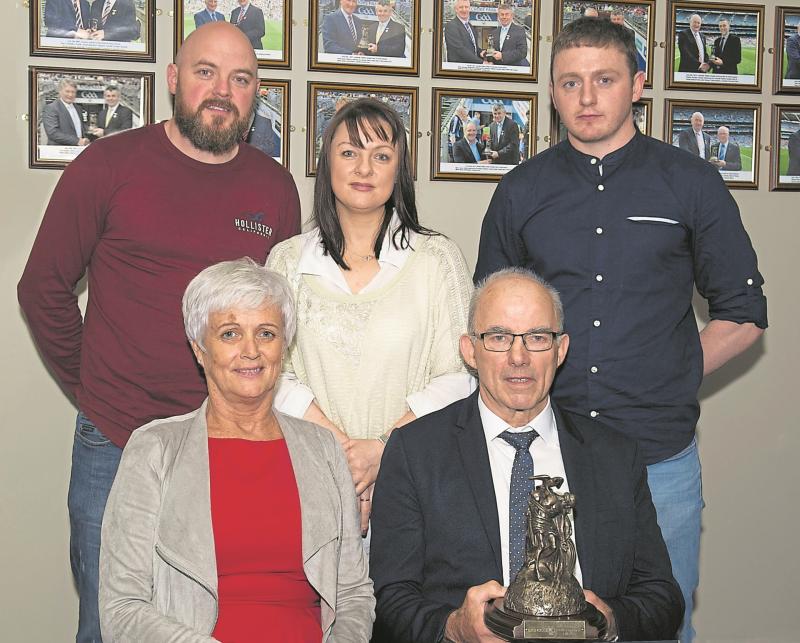 At the presentation of the Leinster GAA Hall of Fame Award to Kildare's Ollie Crinnigan, pictured with Caroline, and at back, Noel, Olivia and Patrick

Just last week Ollie Crinnigan joined an elite group of footballers, hurlers, officials, administrators, and indeed journalists, when he was inducted into the Leinster Council GAA Hall of Fame.
The great Carbury club man is not the first Kildare Gael to join this illustrious group as before him Pat Dunney and Seamus Aldridge were both honoured for their services.
One of the biggest mysteries is probably why Ollie Crinnigan had to wait until 2019 to get the call from Leinster Chairman, Jim Bolger, but as they say, better late than never.
The highlight of Ollie Crinnigan’s playing career was, without question, winning the U21 All Ireland Football Championship in 1965 and then in 1978 becoming Kildare’s first ever All Star.
It is amazing really that while Crinnigan played minor, U21 and senior football for his county, the only provincial medals he holds were won at U21 in ‘65 and ‘66 and of course the U21 All Ireland in 1965.
Ollie played in no less than six Leinster senior finals, losing each and every one of them. However, on the club scene he has the distinction of winning an incredible 11 SFCs, playing in eight consecutive finals from ‘65 to ‘72.
One distinction Ollie Crinnigan holds is the fact he played in the Leinster Minor, Leinster U21 and Leinster senior football championship, all in the one year.
No burn-out in those days.
And another stat, one many Kildare fans may not even want to know, is that Ollie Crinnigan wore the famous Offaly colours before he wore the white of Kildare.
That was back in his school days when he attended Edenderry Vocational School and he lined out with the Offaly Vocational Schools county team.
And there were some illustrious names on that county schools team along with Mr Crinnigan. Household names such as Pat Mangan, Pat Nally and Ned Cummins, Jody Gunning and Eugene Mulligan, to name just a few.
And at that time Ollie did not play between the sticks; in fact he lined out just in front of the custodian wearing no. 3, going on to play in the same position for Kildare in 1964.
In an interview with this writer for a publication that has yet to see the light of day, Ollie explains that having played minor in 1964 he was again selected the following year. However, in his own words “I did not perform well in a challenge game when the great Frank Cummins scored six points off me”.
Ollie takes up the story. “The men over the minor side that time was Jim ‘Day Day’ Coffey of Newbridge; Joe Ryan and Parkie Winters from Sallins, along with Frank Lusk from Carbury.
“On the verge of being dropped in ‘65 it was ‘Day Day’ who suggested to put me in goals telling his fellow selectors ‘he played in goals for the Offaly school team.’
“And that is exactly how I ended up playing between the sticks, and ‘Day Day’ God rest him, never let me forget it for the rest of my (and his) life, so but for him I would never had been a goalkeeper.”
It’s a story that ‘Day Day’ often retold but for some reason not everyone believed it. Now Ollie Crinnigan has officially confirmed it but unfortunately ‘Day Day’ is no longer with us — but I can still hear him say “I told yous, ye’ll believe Ollie Crinnigan but ye wouldn’t believe ‘Day Day’.”
Ollie Crinnigan always maintained that apart from the playing side of things, it is the friendships you make over the years that really stand out; friendships that last a lifetime.
“There is nothing more enjoyable than meeting players for a night out, players you would have played with but even more important, players we played against from other counties; call it nostalgia, call it reminiscing, call it what you like, but such meetings can be, and are great occasions.”
Maybe now, having been inducted into the Leinster GAA Hall of Fame, Ollie will get more opportunities to meet, greet, and chat with players he played with and against. I can testify as fact there is no better company for a few hours to sit down with Ollie Crinnigan over a pint or two and talk football.

A great footballer, a great goalkeeper, a great All Star and a truly worthy Hall of Fame recipient.
And a gentleman to boot!