Kildare v Antrim: a throwback to the days of yesteryear in West Belfast

Grassbanks, sunshine and pints of Harpic 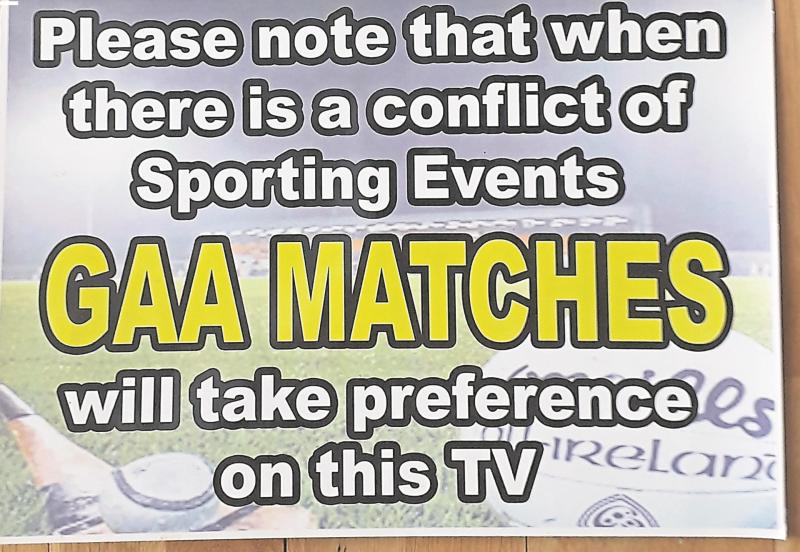 Patrons know where they stand when they see this notice in O'Donnell's GAA Clubhoouse in West Belfast; just a foot away from a potrait of Bobby Sands. One way to cut out arguments

It was a throw-back to days of yore, what with a 3 in the afternoon start, fans standing on grass banks and the sun shining brightly (the sun always shone years ago at big games).
But there was a lot more to our visit to Belfast on Saturday last.
The Lilies fans were scarce, and that's putting it mildly, but the die-hards were there as usual.
We bumped into a few, initially in O'Donnell's GAA clubhouse; a mighty fine establishment, just a few hundred yards from Corrigan Park.
A sign on the wall of the lounge reminded one and all those folk have their priorities right. It read: “Please note that when there is a conflict of Sporting Events, GAA MATCHES will take preference on this TV.”
Now I know of a few establishments that could do with similar signage, and with a picture of Bobby Sands just feet away from the framed sign, no doubt the sentiments of the message were never questioned.
On we went up to our home venue.
And boy the memories came flooding back.
Hands up those who remember Naas Headquarters at Fr Brennan Park and the grass banks surrounding the pitch.
Well this was worse.
Not as many grass banks for one but nevertheless a beautiful idyllic setting.
A group of Kildare fans decided to head down to one of the banks only to be told, sorry lads, press only here.
I cod you not.
Not a table, never mind a chair in sight.
The clubhouse at the St John's Club was nevertheless impressive, especially once we got situated at a pitchside window with a decent view of the proceedings alongside the Kfm crew of Ger McNally, and former Kildare selector (the very knowledgeable) Niall Carew.
We were actually in the Lounge of the clubhouse and while any press folk that headed to the grass banks were devoid of Wi-fi no such problems for the rest of us, as the magic code was handed to us immediately we took up position.
Lo and behold who do we spot walking in, accompanied by a few minders, well actually not sure who was minding who, but one Gerry Adams, sporting his bright yellow team's colours, took up position at the end of the counter.
Ah Gerry.
I was never a member of ...
No, no, don't go down that road.
Gerry quenches his thirst with what looked remarkably like a pint of Harp.
Yes, Harp.
I cod you not.
Another blast from the past.
Harpic we used to call it.
I will leave it to the imagination to decide why it was aka Harpic, except to say one would be fairly 'cleaned out' the following morning after a few pints of the stuff.
Harpic and The Grandstand Inn in Naas many moons ago, along with a toasted special.
Anyone remember that?
It was all the rage.
The sambo was wrapped up in a type of cling film, put under the grill that more often than not was toasted just before the wrapping (and the bread) turned black.
But that's where the Harpic came into it, one gulp of that stuff and both the wrapping and the burned bread tasted like no other sambo of its era.
And Seamus O'Rourke, manager in charge of one of Naas' most popular watering holes in days gone by, in behind the counter incessantly clearing up the crumbs after each bite; wiping the counter like no other bar manager of his era.
Great days.

Great memories.
Anyway back to St John's Club and there was Gerry meeting and greeting getting so many handshakes one felt he might do a u-turn and take the reins from Mary Lou again.
John Behan of Eadestown fame was one of the first over to shake the hand of he who was never a member ...
John must have liked the shake as he insisted on a picture as well but he was but one of many, as some well known Newbridge lads were spotted in the queue looking for a pic and a shake.
Poor Gerry's pint of Harpic must have been nearly warm by the time he got through the lot of them, but in fairness, got through them he did.
We spotted Daithi Malone and another great servant of Kildare football, Ken Doyle, coming into the ground while Tango Dooley and Johnny Goulding, along with their better halves, were also in situ.
The game got underway and it soon became fairly clear that The Lilies had too much ammunition for Gerry's boys. They were sharper, more tuned in; more direct and found their range a lot better and more decisive than the boys in the yellow shirts.
Speaking of shirts, couldn't let it go, but why in God's name did Kildare wear those bottle green shirts that now have a streak of dark blue in them.

Os it the other way around.
Shocking, to say the least.
Who decides on those and why if the opposition are lining out in a bright yellow could Kildare not have worn their traditional white shirts?
Can't understand it.
Anyway as the game evolved The Lilies were dominant, as one hoped, one would expect that when a Division 2 side is playing a side from bottom of the basement of Division 4.
Yes, yes, I know what happened last season but that is what is expected when sides from these divisions meet but of course sport being sport, it does not always work out to plan.
Anyway with Neil Flynn and Adam Tyrrell finding the range with regularity it became more and more obvious that Gerry's lads were not at the races.
By half time the visitors led by seven and within five minutes of the resumption the game was done and dusted and while our new friend Gerry might say that his side fought to the bitter end (again) they simply had no answer to the fire-power of the opposition.
It's a few seasons now since we had a stress-free game at this level (or any level) but it was enjoyable and while one could argue that the opposition was not up to much, nevertheless you can only take out, as Gerry might say, what's in front of you.
Next up another of those sides, as our new found friend might say, from the occupied territory.
Mickey Harte and his entourage will be heading back to Conleth's come Saturday.
Well if ever we owe a team a hiding it is those boys from Tyrone.
They done us twice with late goals over the past few years; one game in particular I recall when the travelling fans were half way up the dual-carriageway when their side hit two goals to steal the points.
It's time for revenge.
It's time to turn the tables.
Time to put down a real marker.
Hopefully.
Hopefully.
And so we motored back to Lilywhite Land, through Gerry's constituency of Louth, arriving back in time to see Kerry stumble over The Rebels and capture, somewhat unconvincingly, yet another Munster title.
The Dubs fairly dumped The Royals. Four points in 70 plus minutes for the Tayto Park boys, and we being told they were on the way back. The drive for five lives on.
But for now we will concentrate on Saturday and Tyrone.
A clash with the Derby but when Sky come knocking ...
Still, it doesn't get much better.
Bring it on!