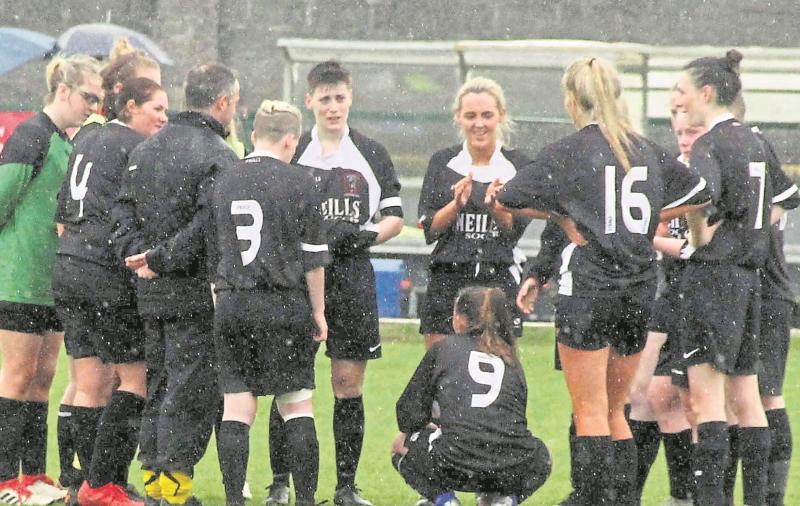 The countdown to the KDFL’s participation in this year’s Football Association of Ireland Angela Hearst Women’s Inter League Trophy final begins in earnest this week as we lead up to the decider this Friday evening (June28) at the superb newly developed grounds on the Campus of University of Limerick where the girls will take on  the best of the Wexford Women's Soccer League.

The road to the final began in March this year as Manager David Morey set about assembling his squad of players from eight of our nine women’s teams.

A much changed squad from the previous season sees a mix of youth with experience. They trained at Kilcullen Community Centre over the ensuing weeks and took to the field for the first game in the qualifying rounds against last year’s beaten finalists the Metropolitan Girls league on April 28.

A slender defeat by the odd goal in five was not to dishearten the girls as they faced into their next challenge, this time at home to the Galway and District League, played out at the spiritual home of the KDFL’s Women’s Representative team Mullarney Park Castledermot on May 19. A delayed kick off due to the late arrival of Galway did nothing to disrupt the girls preparations and they overcame the girls from the West on a scoreline of 4-2 to leave them in second place in the group, the MGL having overturned Galway earlier in the group stages to top the group.

St. Coleman’s Park, Cobh on June  9 was to be their toughest test yet as they made the long journey to the South West Coastal town to take on the current Cup holders the Cork Women's Soccer League on their home turf. It was not a game for the faint of heart and the travelling supporters can attest to that.

Kildare got out of the blocks quickly and Brooke Dunne put them into a three minute lead following some good work from Stacey Harris.

Kildare’s took the lead once more midway through the half with another absolute belter. Winger Danielle Dempsey found Laura Matthews in a central position 25 yards out and the Louth native controlled it with an impeccable first touch and hit a superb half volley with the second touch that rattled the roof of the net before the Cork goalkeeper could even react.

The score was to remain unchanged until five minutes before the end when a long clearance down the right found Laura Matthews. Having created a bit of room and a shooting opportunity, the keeper was only able to parry her curling shot into the top corner, 3-1 to the visitors.

As before Cork came back to put the minimum between the side’s once more with a well taken penalty with time almost up. However it was to be Kildare’s day as they finished strong with a goal in the dying minutes when Captain fantastic Jess Turner whipped in a dangerous cross and with the keeper committed player of the Match Laura Matthews was on hand to poke home the insurance goal giving her a well-deserved and hugely impressive hat-trick to the delight of her team mates, Manager and travelling supporters.

The final on Friday is a precursor to the FAI Under 15 Gaynor Cup. It will be a completely different atmosphere to previous games with records attendance expected from the Gaynor squads who have gathered from the four corners of the Country to compete in this National Competition over the weekend.

It is fitting there are two Leinster League’s competing in this year’s final as the trophy itself has origins with the Leinster Football Association (LFA), our provincial governing body.

The Treasurer of the LFA Dave Hearst and his family donated the trophy in memory of their mother Angela, who had a keen interest in the game. The competition was initially run under the auspices of the Leinster FA before it was handed over to the Womens Football Committee (WFC) following the integration of the Womens FAI into the Football Association of Ireland in 2017.

The league wish Dave and all the girls the very best of luck. Whatever the outcome you have done your League and your Clubs proud and for that we are grateful, giving us this opportunity to shout about something very positive in the game for once as we celebrate your amazing achievement.