Think Kildare have been down this road before 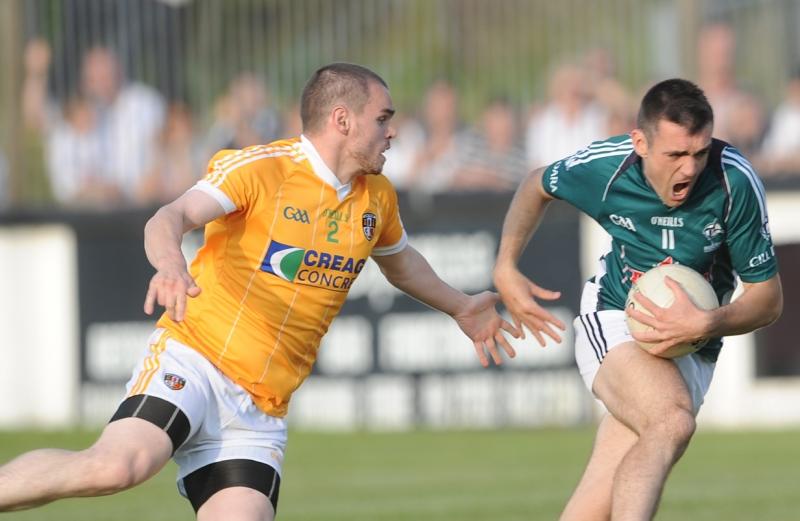 Kildare's John Doyle gets away from Colin Brady of Antrim in the All Ireland championship qualifier at St Conleth's Park, Newbridge in 2010

Think we've been down this road before.

The Qualifier route that is.

How could anyone forget.

Last season the entire country was united in Kildare's Newbridge or Nowhere saga.

When the Round 2 Qualifier draw was made last week the potential was there for another saga when Antrim got a home draw to face Kildare.

Casement Park of course is The Saffron's home ground but is out of commission with some sort of a planning dispute holding up a much needed revamp.
Antrim had a home game against Tyrone in the opening round of the Ulster SFC and elected to take on Mickey Harte's men in The Gaelic Grounds in Armagh and it was immediately presumed that that is where this game against Kildare would be played also.
However the Antrim Co. Board nominated Belfast ground Corrigan Park as their choice of venue.
An all-standing ground with a capacity of 2,600 saw Croke Park send up a delegation for a Health & Safety audit and following that it was given the green light, the capacity reduced to 2,100 and the game all ticket.
So on Saturday Kildare fans will travel (hopefully) up north for a game that throws-in at 3 pm.
So what can we expect from Antrim, a team Kildare last met in the Qualifiers on the day of the late great Dermot Earley's funeral, Saturday June 26, 2010.
That was one of the most moving occasions one could imagine and to see Dermot Jnr stand shoulder to shoulder with his team mates and the attendance rise in a thundering round of applause was a day everyone present will never forget.
And it got even more emotional when Dermot came on in the second half in a game that Kildare drew before eventually defeating Antrim in Casement in the replay.
So nine years later what can we expect?
Antrim, a Division 4 team, finished in third position this year in the league, winning three games against London, Wicklow and Limerick; losing to Derry, Wexford, Leitrim and Waterford.
Antrim played Tyrone in the opening round of the Ulster Championship, losing to Mickey Harte's side, 2-16 to 1-11.
The Saffrons then drew Louth in Round 1 of the Qualifiers and went into that as underdogs but defied the odds defeating the home county 2-16 to Louth's 1-11.
It was Antrim's first win the Qualifiers since 2015, and it was a game that early on Louth led by all of six points.
Matthew Fitzpatrick inspired Antrim that day, who led by a point at half time but a few quick points put them in the driving seat early on the resumption.
That will no doubt give Antrim a lot of confidence going into Saturday's clash and the game being played at Corrigan Park will certainly favour the home side.
The fact that Kildare will have almost a two week break since the Leinster semi final should be a help as Cian O'Neill and his management team set about getting The Lilies in the right frame of mind for this tricky assignment.
Despite losing out to Dublin by all of 15 points there were positives to be taken from that disappointing result against probably the best team in modern day football.
Keeping Dublin without a goal was certainly a positive; creating three gilt edged goal chances was also a plus.
Of course creating and finishing are two entirely different scenarios, it is something we saw against Wicklow and Longford in the drawn game but that they are creating is something that can be worked on and, hopefully, improved on, by finishing.
Hopefully Niall Kelly and Paddy Brophy will be back to full fitness and available; every player and every option is needed at this stage and those two experienced lads coming through would certainly be a bonus.
The form of Ben McCormack, along with Adam Tyrrell is encouraging but even with those two lads showing just what they are capable of, you won't win many games with just two forwards firing; the time for others to put their hands up and make a much more significant contribution is essential if victory is to be achieved.
Last season's run in the Qualifiers and the Super 8s should stand to Kildare this time around; all things being equal; barring injuries and a few more lads stepping up to the plate, Kildare should have too much for Antrim on the day.
On one of the busiest weekends on the county front Kildare minors are back in action on Friday evening when they travel to Portlaoise to take on Laois in the Leinster MFC (8pm throw-in) while on Sunday Kildare Juniors travel to Croke Park as curtain raiser to the Dublin v Meath SFC final, to take on Meath in the Junior decider.
Kildare will be defending the title they won last season and while they are back in the final after just one game defeating Longford, they have a fine mix of young and seasoned players that could possibly give them the edge.
Johnny Doyle, at 41, showed he still has many tricks in his armour while Jack Robinson, Padraig Nash are players that can be expected to make impressions at a higher grade in the not too distant future, along with one or two others as well.
Busy weekend on the way and with the U20s in action come Tuesday, Kildare fans will certainly have much to ponder over the next five or six days.