So what, if anything, have we learned from Kildare's defeat to Dublin

Possibly little, it has to be said 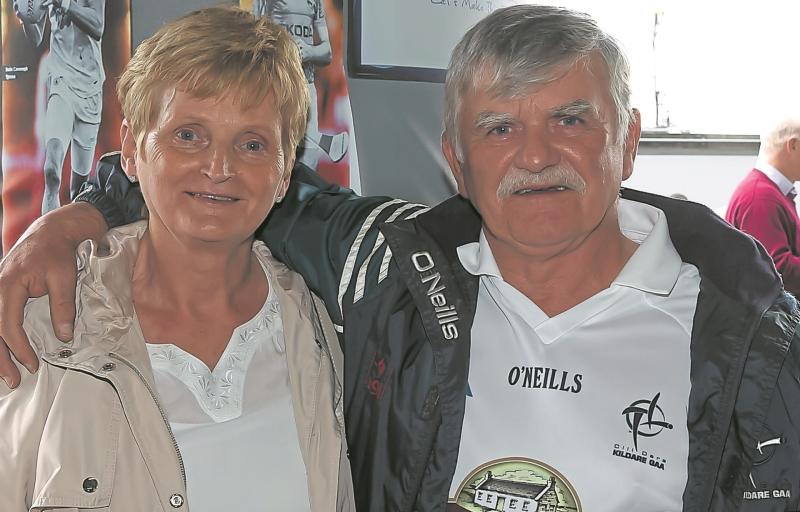 Supporting Kildare against Dublin, Marian and Frank Watchorn from Kilmead

Driving up the N7 on Sunday morning two things struck very forcibly. The first being the lack of traffic; the second being not a sign of flag of any hue, as we journey to the Big Smoke.
If the Chairman of the Leinster Council had his say, he would probably blame Kildare as he has already blamed the Shortgrass county for the attendance of just 36,126; considering we were told there were something in the region of 16,000 tickets sold in the latter stages of last week, the final figure doesn't look too bad, all things considered.
The price of a ticket could hardly be described as cheap but needless to say there was no movement in that regard.
If the admission was reduced by say a tenner, would it have increased the attendance?
Hard to know but you can rest assured what ever else there will no deviation in the ticket pricing.
With The Royals having dismissed what was once referred to as The Queen's County, it was the turn of The Dubs and The Lilies.
In between the two games patrons were treated to what one fan described as the canonisation of Dublin keeper and captain Stephen Cluxton.
Definitely a great achievement, Sunday being his 100th championship game but is it me or was that entire episode somewhat over the top. Especially as most of the Dubs would have missed it as The Hill did not fill up, well not entirely fill up (Kildare's fault) until just before the throw-in.
On come the teams as the word filters through that The Lilies are down both Niall Kelly and Paddy Brophy, both reported to have picked up hamstring injuries during the week.
Definitely blows, especially when taking on The Dubs, you need everyone available in these circumstances and with those two lads out, the options are certainly cut down and that was certainly an early worry.
Off we go and we did not have to wait long to realise why Dublin were roaring hot favs as within 12 or 13 minutes they were half a dozen points clear and in control.
Kildare, to their credit, got themselves back in it but while they trailed by just four at the break it was as obvious as the nose on anyone's face who was the superior team.
Granted, Kildare did eke out a few excellent goal chances, none were taken due to a combination of excellent goal keeping from the 'canonised' one and finishing that left one scratching one's head in absolute disbelief.
The more we went on the more The Dubs pulled clear. The Lilies made more chances but failed to fill the Dublin net.
In the end 15 points separated the sides; Dublin failed to find the Kildare net; The Lilies failed to fill the Dublin net.
Favourites march on.
Underdogs head to The Qualifiers and a trip up north to take on Division 4 side Antrim.
So what have we learned?
Probably nothing, or very little we did not already know.
From Jim Gavin's point of view the chances of making it five-in-a-row are growing stronger with every outing.
Dublin are a smashing side; well drilled, extremely fit; play to a system that everyone buys into with an incredibly strong bench.
They will take a lot of beating.
And what of Kildare.
On the positive side the displays of Ben McCormack and Adam Tyrrell were very heartening, the two work well together, great telepathy, understanding between them.
If we were told before the game Kildare would succeed in keeping Dublin without a goal throughout it would have been very encouraging and in fairness the defence as a whole did reasonably well in that regard.
However 26 points is a fair clatter of white flags and while we can praise one and all in keeping the green flags redundant, the white flags, unlike on the way to the game, were seen early and often.
In truth, Kildare are not anywhere near the level Dublin are at and that includes fitness, pace, movement, ability to turn defence into attack; they are so tactically aware and what can you say about their bench.
It is of little consolation to Kildare that the vast majority of counties are in a similar position as themselves.
The gulf is growing and growing and how it can be reduced is the real conundrum.
Some of The Lilies though did not spark on Sunday; lads that had been going well up to now seemed somewhat leg weary from an early stage.
Was it the occasion.
Or have we lads that are simply not up to this level of football?
Possibly a bit of both.
There are times when you have to say, we are simply not good enough and Sunday was one of those days, bearing in mind of course who the opposition were.
A somewhat decent draw in The Qualifiers sees The Lilies heading up north to take on Antrim on Saturday week
Definitely a chance to progress but only if the minds and the bodies are right and the hunger is there.
Kildare may not be up to the Dublin challenge but that is not to say they cannot progress in The Qualifiers.
They can, and hopefully they will against Antrim and beyond.