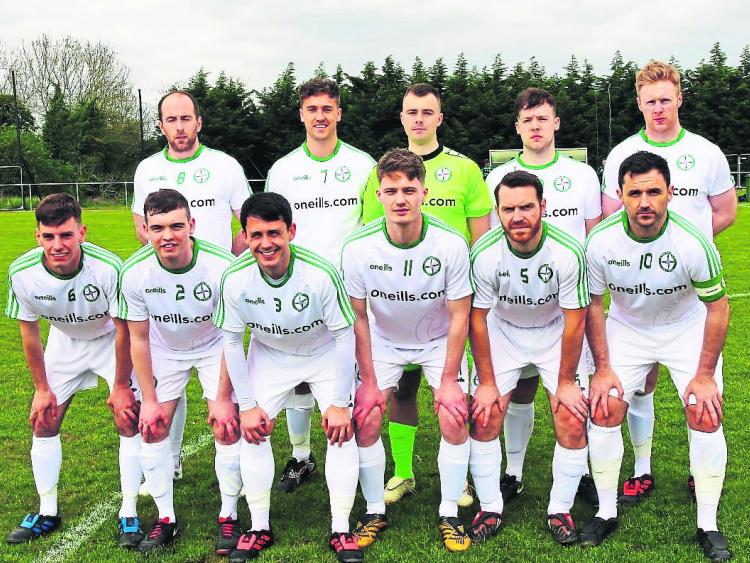 Heartbreaking scenes at the MDL Grounds on Sunday for KDFL side Straffan AFC when they were defeated by an 86th minute goal from Mid Sutton-Sportslink of the LSL in the Leinster Football Association Junior Shield Final.
It is ten years since a KDFL side contested the final when BBC United brought the trophy home to Kildare in 2009. It was not to be however for this North Kildare side on this occasion.
In what was a picture perfect day at the home of the North East Football League both sides displayed the very best of grassroots football with a clean, attacking open display of football for 94 minutes.
Straffan secured their final spot by dispatching six teams en route including current holders Gorey Rangers in round one. Others to fall at the hands of the KDFL Club were Ballinahown FC, Derry Rovers, Kildare Town AFC, Iveagh Celtic and Schreen Tara in the Semi Final.
Mid Sutton took advantage in the opening exchanges as Straffan took some time to settle with their keeper Matt Duggan claiming some very important crosses from the Dublin side’s attack.
Midway through the half Straffan stamped their authority on the game and began to make some in roads into the Mid Sutton half.
KDFL Divisional player of the year 2018 John Tracey had a great effort touched over by the inform Mid Sutton netminder and on the half hour some great inter play with Tracey and Philly Connolly resulted in a shot from 20 yards from Connolly being pushed onto the post by the keeper and rebounding to safety to deny the Kildare side an opener.
Mid -Sutton were guilty of some less than clever defending with Straffan winning several free kicks around the danger area and the impressive Treacy again tested their keeper several times but he was proving equal to the task.
At the other end the Mid Sutton’s no 7 was freed by their No 10 but an excellent save by Duggan kept the game scoreless to the break.
Straffan, as in the first half, started a little sluggish and the Mid-Sutton no 10 was causing all kinds of problems for the Straffan defence but again Duggan in the Straffan goal came to his side’s rescue. Straffan introduced 18 year old James Gannon and Rob Stanley to freshen up things and a glorious chance came Straffan’s way with ten minutes remaining when Connolly put Tracey through one on one with the keeper, but the Sutton keeper pulled of a fantastic save to deny Straffan’s top scorer.
With four minutes remaining a cross from the right wing evaded all of straffan’s defenders and Mid-Sutton’s No 12 headed home from close range to put the Dublin side in the driving seat with time almost up.
Try as they might Straffan could find no way through a Mid-Sutton defence which had shut up shop and Mid-Sutton went on to claim victory. Best for the Kildare league side were Neville, Donoghue, Tracey, Connolly and Fox.