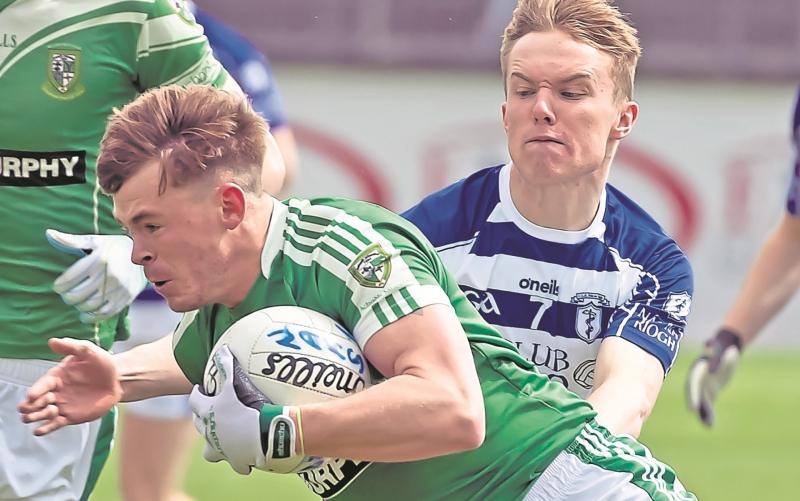 Champions, Moorefield, opened the defence of their title in the Preliminary round of the Joe Mallon Renault Motors SFC with an impressive win over Naas at St Conleth's Park this afternoon.'

Playing with the aid of a near gale, this one was practically over at half time with Moorefield leading 1-11 to 0-1 and while Naas did come into a bit more in the second half, they never threatened the champions with Eanna O'Connor hitting an impressive total of 1-7.

Celbridge had their expected win over Maynooth and this one also looked all but over at the break with Paul Curran's side leading 0-11 to 0-1.

That lead was extended by two points after 35 minutes but incredibly Celbridge failedk to raise another flag with Maynooth hitting ten points on the trot.

Castledermot defeated Raheens in a somewhat disappointing game. The winners fully deserved their win, they led 0-5 to 0-3 at at the break but pulled clear in the second half to win by a somewhat comfortable six points.

In the final SFC game of the afternoon, Eadestown put on an impressive display to defeat Clane.

Meanwhile in the Pittman Traffic Intermediate Football Championship, played at Hawkfield, St Kevin's defeated Ballyteague (minus Jimmy Hyland) by 3-13 to 27 while Suncroft got the better of Kilcullen by two points.

In the final game at Hawkfield Monasterevan had one point to spare over Straffan.