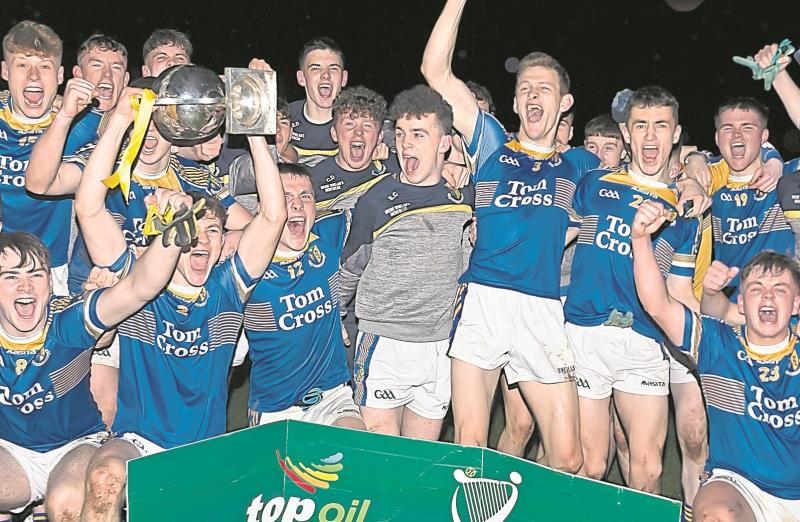 On a memorable game in Parnell Park, this evening (Wednesday March 20) Naas CBS retained the Top Oil PP Schools 'A' Football Championship final with a six point win over Wicklow Schools, taking home the Bro Bosco Cup for the second season in a row.

The sides were level at four points apiece at the break but Naas looked all but home and hosed when leading by four points as we entered time added on in the second half.

Wicklow Schools, however had other ideas and hit back with a goal from Aaron Kennedy and a point from danger man Eoin Darcy to send the game to extra time.

Naas scored the opening three points in extra time and when Alex Beirne got on the end of a Kevin Kelleher pass, Beirne blasted to the net. Wicklow hit back with a point but half time in extra time Naas led by a very comfortable 1-12 to 0-7.

The Wicklow boys scored the opening two points of the second  half of extra time as many players from both sides required attention for cramp but try as they did Wicklow could not get any closer to the champs who finished in emphatic fashion with substitute Harry Carroll found the Wicklow net with the last kick of the game as the Naas CBS fans went wild with excitement.

Naas CBS manager, Ronan Joyce confirmed that though the All Ireland semi final against the Munster champions is fixed for this coming Saturday, his side will not be playing.

"You could not ask players to play again within three days; we agreed to postpone games due to Scoil Eoin's involvement in hurling and football in Leinster as they invoked the five day rule, so we will be invoking the five day rule on this one; no doubt; we will not be playing on Saturday."

Hopefully common sense prevails and the semi final will be fixed for mid-week or next weekend.