Kildare v Cork: pitch not the only problem in Pairc Uí Chaoimh

Not even a half time cuppa for visiting press 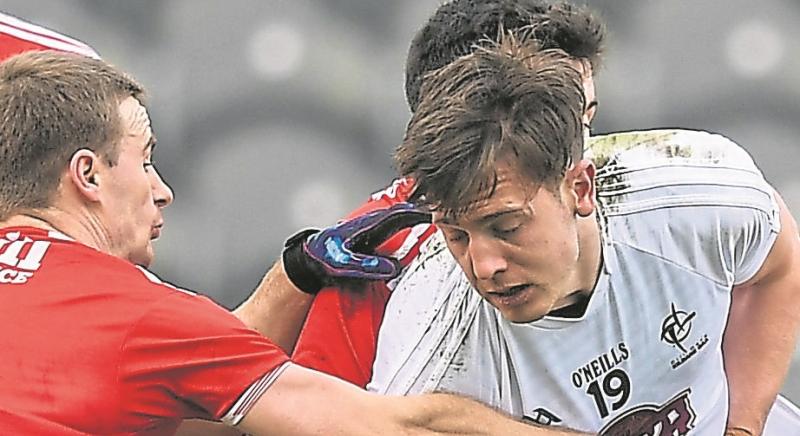 Cian O'Donoghue (Kildare) and Matthew Taylor in action in the AFL

And so a few days after Kildare's defeat of Cork in Pairc Uí Chaoimh, it is the state of the playing surface that is still making the headlines. Hardly surprising really.

To spend somewhere between €80 and €110 million and not to include the playing surface for re-development remains absolutely baffling.

It has been reported that after the football the pitch was in a very poor condition as the AHL game got under way.

I have to say the pitch was in a terrible state even before the football commenced.

When we arrived, at the magnificent stadium it has to be said, it was obvious that the surrounds of pitch looked in a terrible condition. However once the Kildare and Cork sides had completed  their warm-ups prior to the start of the game, the pitch was tearing up at a rate of knots.

Then at half time to allow young kids on to the pitch for mini games compounded the problem.

Kildare manager, Cian O'Neill, was keen not to get drawn into the condition of the playing surface but he did say he felt conditions, while the same for both sides, did nothing for the game as players found it very difficult to turn at speed, losing their standing on many occasions.

Croke Park have now stepped in and said "due to player welfare" they have moved their next home game to Pairc Ui Rinn and authorities will continue to monitor the pitch every Monday while acknowledging that come the season end the pitch will need to be completely dug up, drained and relaid.

Terrible pity the authorities did not take a look at the game prior to Sunday's games.

Has the cash run out?

Well it really seems that way especially when you consider at half time when the press in attendance were guided to an area for refreshments only to discover not only was their not even a Marietta biscuit but not even a drop of milk for a cup of tea.

When you compare it to St Conleth's Park in that regard the phrase of 2018 instantly comes to mind.