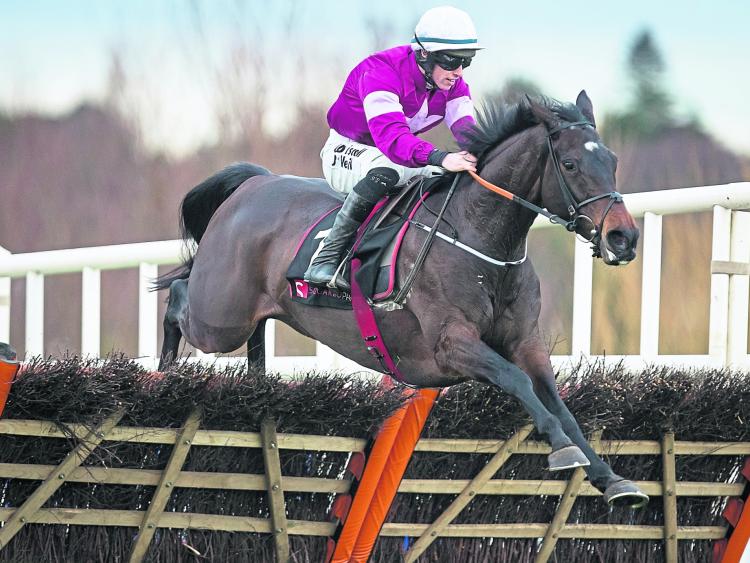 Apple's Jade with Jack Kennedy on board

IT may be just the second hosting of the Dublin Racing Festival but it is undoubtedly the most important for so many reasons. Given the mildest winter we’ve had in an age, this weekend’s two days extravaganza will offer the first opportunity for plenty of our equine stars to see can they deliver when the guns is put to their head.
Hardy ideal with the Cheltenham festival less than six weeks away but that’s the sort of season we’ve had up to now. Between Leopardstown’s action, punters will get to see the majority of our best National Hunt stars clash for over €1.8 million in prize money; that includes eight Grade 1 races.
The least valuable races are worth €87,500 so to say that the competition will be at fever pitch is an under-
statement.
As it stands, the Cheltenham Gold Cup is wide open despite what the Presenting Percy fan club might say. He won’t be lining up in Sun-
day’s Irish Gold Cup but pretty much everything else we have in the blue riband picture will be there. So many questions still have to be answered too.
Was Kemboy’s Christmas route a fluke?
Can Bellshill step up to the level needed to be a genuine contender?
Is Al Boum Photo the dark horse in this year’s race?
What about Road To Respect, Anibale Fly and Monalee?
With that sextet, I think I have Sunday’s showdown covered. Right now, I’d be most keen on the chances of Bellshill and Al Boum Photo for both and there’s something in the back of my mind telling me Al Boum Photo might just be more than a dark horse for the remainder of the season. His gallant RSA Chase effort last season tells me that he’s the closest horse to Presenting Percy.
On to the Champion Hurdle next. Traditionally, Saturday’s Irish Champion Hurdle tells us who our leading two mile hurdler is but with Laurina highly unlikely to show up, that’s not going to be the case. Samcro won’t be there so some may say it’s basically Apple’s Jade to lose?
Melon can’t be good enough and I suspect that Sharjah won’t show up. Yes, it’s Apple’s Jade to lose.
The Dublin Chase over two miles will be a fascinating race for sure. Will stable companions Footpad and Min lock horns for the first time?
I doubt it especially given the recent negative vibes regarding the former.
Min won this race last year so he sets the standard but he’ll have his old pal Simply Ned to watch out for. Then there is the potential prospect of Waiting Patiently making the trip across the Irish Sea.
I can’t remember a season when we’ve had such an average bunch of novice hurdlers. For the three main novice hurdles at Cheltenham Festival, we’re not responsible for one single market leader so that tells you all you need to know.
The opening race of the weekend is the Grade 1 Lacy & Partners Solicitors Novice Hurdle over 2m6f and I’m not so sure if we’ll have any leading Albert Bartlett Novice Hurdle fancies lining up here. You’d wonder if Battleoverdoyen will take his chance but the likes of Relegate or My Sister Sarah might be key contenders from the Willie Mullins’ camp.
We don’t seem to have a particular strong hand in the Supreme Novices’ Hurdle as it stands but if Vision D’Honneur or Klassical Dream wins the Chanelle Pharma Novice Hurdle, then that might change.
Sunday’s showdown for the juveniles will surely be another tight tussle between Sir Erec and Tiger Tap Tap and I’d be fairly confident that whatever wins that Spring Juvenile Hurdle will follow up in the Triumph Hurdle. That duo look a cut above the rest of the four-year-olds in training.
We haven’t even mentioned Delta Work lining up in the Grade 1 Flogas Novice Chase and given that he is one of our very few Cheltenham bankers as it stands, he’ll be a hugely popular winner should he deliver. Something similar can be said about Le Richebourg in Saturday’s Frank Ward Irish Arkle.
Undoubtedly, this Satur-
day offers sporting fans the opportunity to soak up what is sure to be an exceptional day of drama and high quality. Whether you’re at Leopardstown or the Aviva Stadium or neither, make sure you don’t miss a beat at either venue. There are so many things to saviour from two sports which we continue to dominate.