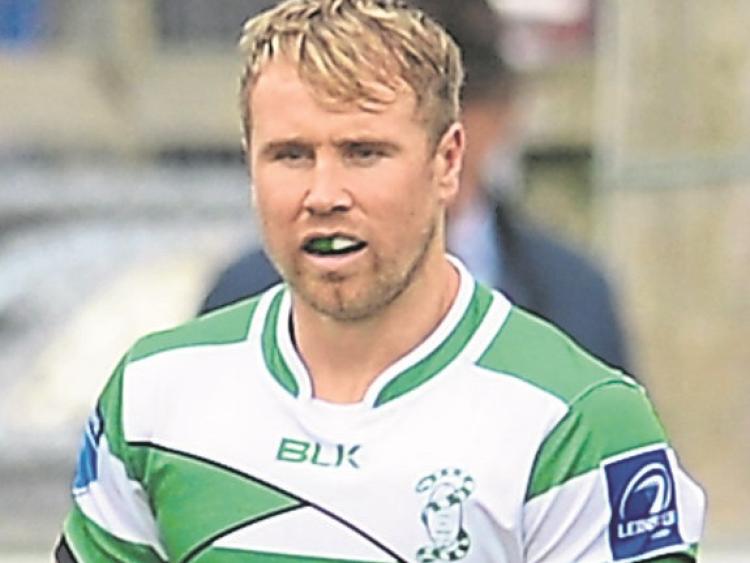 MU Barnhall won on Saturday to maintain their unbeaten record atop Division 2B of the All Ireland League while Naas remain in third place in Division 1B after their home draw with City of Armagh.
In the Leinster League Cill Dara won on Sunday to remain locked on 44 points with Clondalkin at the top of Division 2A but are edged out of first place on their head to head record while Edenderry returned to the head of affairs in Division 2B when they garnered maximum points at home against Athy.
Adam Byrne was a late addition to Ireland’s Guin-
ness Six Nations squad that trained in Portugal last week as part of their preparation for next Saturday’s eagerly anticipated opener at home against England in the Aviva Stadium.
Along with Joey Carbery he was one of two Kildare players that travelled to the Algarve as Tadhg Beirne was ruled out of the opening two games after picking up an injury in Munster’s last European encounter with Exeter ten days ago.
Centre Darren Hudson, hooker Gareth Murray, lock forward Dan Murphy as well as wingers Luke and Michael Mellett scored first half tries for MU Barnhall in Merrion Road against Wanderers as they led 31-7 at the interval.
Replacement hooker Michael Corcoran scored another try after the break as the Leixlip club cruised to a 38-14 victory, a result that cemented their 8-point lead at the top of Division 2B and they can now enjoy a couple of free weekends before action resumes on Saturday fortnight when Corinthians visit Parsonstown.
While MU Barnhall appear to be well on the way to a league title Division 1B on the other hand is a far more intriguing competition with a mere 12 points separating all ten teams. Naas managed to hold on to their third place with a late try scored by hooker Conor Doyle that full back Peter Osborne converted to earn a draw.
Osborne had kicked a penalty goal in the first half as the home side trailed 10-3 at the break in Forenaughts and he added two more in the third quarter as the visitors extended their lead at one stage to nine points.
However, out half Peter Hastie’s try with a quarter of an hour remaining dragged the hosts back into the game and after a further City of Armagh touchdown it was Doyle’s try with five minutes to play that set up Osborne’s equalising conversion and a share of the points.
Naas remain in third place but have now dropped three points behind leaders Malone and their next game is away to St Mary’s College in Templeville Road on Friday fortnight.
Cill Dara made it eight wins on the bounce in Division 2A of the Leinster League with a hard fought 13-9 victory at home in Silken Thomas Park against fellow title contenders Wexford Wanderers on Sunday.
Cill Dara trailed 9-3 at the interval having played against the strong breeze and the key moment came shortly after the hour mark when prop forward Danny Lambe crashed over for the only try of the game.
Scrum half Peter O’Neill, who had kicked the hosts opening score, converted the try to nudge the Kildare town club ahead for the first time and then kicked a penalty goal that ensured some breathing space as the visitors mounted a stern late challenge that Cill Dara managed to rebuff.
Edenderry retuned to the top of Division 2B after beating Athy 28-10 at home in Coolavacoose.
The home side led 21-10 at half time following a pair of tries scored by winger Willie Groome and another dotted down by replacement hooker Keith O’Neill but they had to wait until five minutes from time before they snared the bonus point when f Lee Dempsey scored.
North Kildare lost 29-12 in Division 1B by Tullow, in Division 2A Newbridge were edged 22-21 by Clondalkin and in Division 3 Clane lost 12-7 to Roscrea.