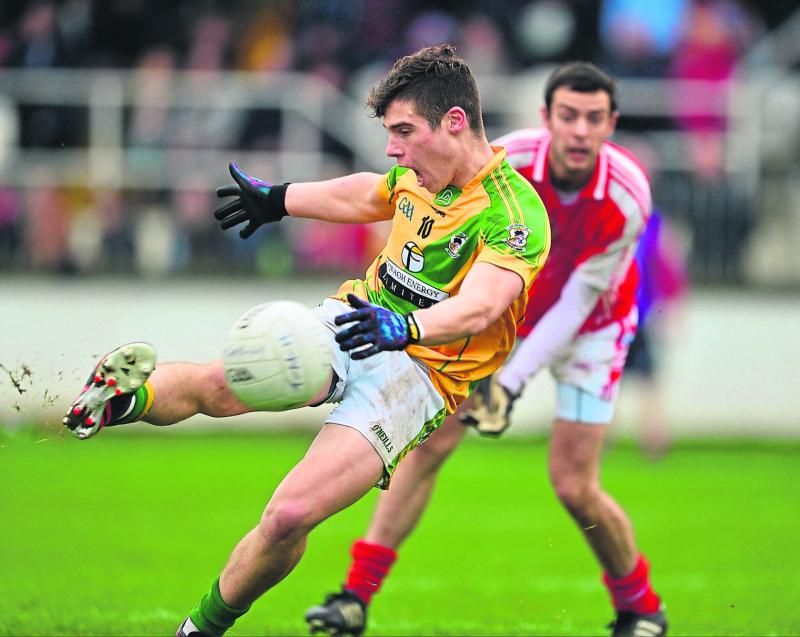 The House are Kings of Leinster was how the Leinster Leader headlined the Two Mile House success in the final of the AIB Leinster Club Junior Football final back in the first week of December 2013.
Hunterstown Rovers from Louth provided the opposition and in the end the Kildare champions had six points to spare (2-15 to 1-12).
Many of the stars of that great Sunday are still starring for The House as they bid to make it two Leinsters this coming Sunday when they take on Shamrocks of Offaly in the Leinster Club IFC decider.
Man of the match and scorer-in-chief that day was Kildare minor star of that year, Chris Healy.
Wearing the no. 10 shirt that day Healy notched up the considerable total of 2-2, all from play, his only black mark coming in the dying minutes when after being fouled himself, was awarded a penalty but his effort was well saved by the visiting keeper.
It made little difference however as the final whistle arrived and the small rural club on the outskirts of Naas, was crowned AIB Leinster Junior Club Football champions.
Apart from Chris Healy other names to the fore that day, and who are still strutting their stuff for The House, include Aidan Casey, top scorer in the county final this season with ten points but even that was surpassed in this season's Leinster semi when he notched up no less than 2-10.
Casey raised six flags in that final of 2013, Chris Julian posted three frees, Mark Sherry two, while Derren Casey and Niall Browne added a point apiece.
Niall Browne, now calling the shots from the sideline for TMH these days, although he did introduce himself in the quarter final this season, scoring a point later on, despite taking the mother-and-father of a shoulder that required a visit to the A&E, was then lining out in the county colours of Clare, having qualified through his Clare native mother.
Although Two Míle House led 1-4 to 0-1 early in that final, by the three-quarter mark that lead had been cut back to a single point with the Louth champions piling on the pressure.
However Cometh the hour Cometh the man and after Darren Casey refused to give up a ball heading wide, gathered, found Chris Healy who did the rest with a goal that was exactly what was needed from a House point of view; it did the trick; there was no looking back after that as the boys in green and gold went on to make a piece of history being crowned Leinster champions.
More success was to follow but that's for another day.
Two Mile House scorers, Chris Healy 2-2, Aidan Casey 0-6 (3 frees), Chris Julian 0-3, Mark Sherry 0-2, Derren Casey 0-1, Niall Browne 0-1.