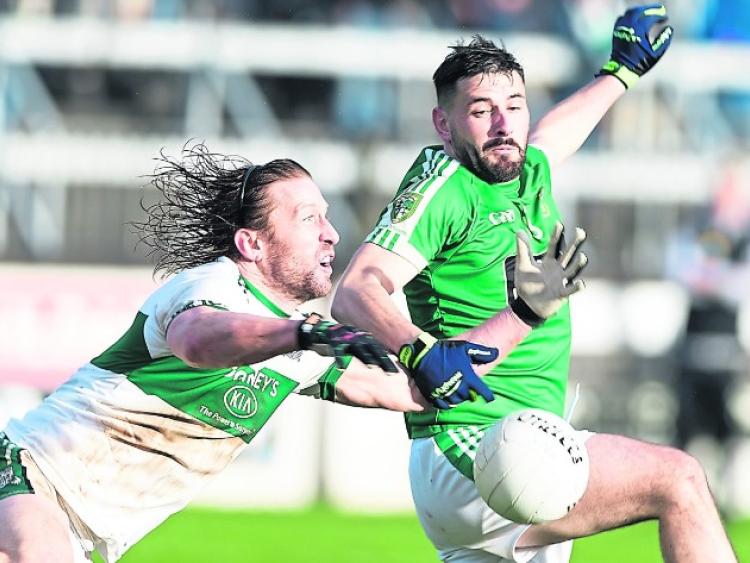 The toss of a coin is rarely put forward as a reason for the outcome, or at least for possibly shaping the outcome of a big game, or any game as far as that goes.
But on Sunday last the toss of a coin had a major influence on the outcome of the Leinster Club SFC quarter final between holders Moorefield and challengers Portlaoise.
Both captains lined up in the middle, James Murray of Moorefield and Paul Cahillane of Portlaoise as referee Barry Tiernan tossed the coin for choice of ends.
It was Portlaoise's first break of the day as Cahillane pointed to the town goal as the wind and rain took centre stage forcing those on the terraces to vacate their positions leaving just a few - including the Moorefield 'Long Lad' - to take the full brunt of the rowdy conditions.
It was a major break for the visitors, not that we knew it at the time but we certainly knew before the break as Portlaoise looked well on their way to avenging last season's quarter final defeat at the hands of Sunday's opposition.
On top of that The Moores struggled to get to grips with the conditions while Portlaoise seemed to thrive on them.
Time and time again Moorefield fumbled the ball; dropped it, miss placed passes as they were just not comfortable in that opening half at all.
The home supporters on Sunday were scratching their heads during the half time break with the disappointing showing of their favourites, however, they were soon on their feet, found their voices again as the champions opened with a brilliant Roli Sweeney point followed by Niall Hurley Lynch filling the the Portlaoise net to cut the deficit to just one score.
It was here that Portlaoise showed what a decent side they are. Laois champions for 12 out of the last 13 years, they showed that a lack of competition in their own county does not thwart their ambition or their ability to mix it with the best of them.
They certainly showed they don't do panic although suddenly having been in a great position at half time found themselves under severe pressure.
It is a credit to Portlaoise the way they hit back with three points in three minutes effectively nullifying that early Moorefield goal.
The fact that Moorefield did not get that deficit under three points had a big bearing on the end result.
Moorefield, will no doubt look back and point to certain aspects of the game that if some had gone their way the result may have been different.
Such is football though and it is very rarely indeed that a losing team in a tight game can not point to a miss-placed pass, a missed scoring opportunity or indeed a decision by the match official.
The Moores may no longer be Leinster champions but they have certainly represented their county with pride, with passion and proved tremendous ambassadors both this and last season when representing their county.
But still one can only wonder at what if.

What if the toss of that coin had gone the other way and The Moores had the elements in their favour for the opening thirty minutes or so.
Such is the beauty of sport!