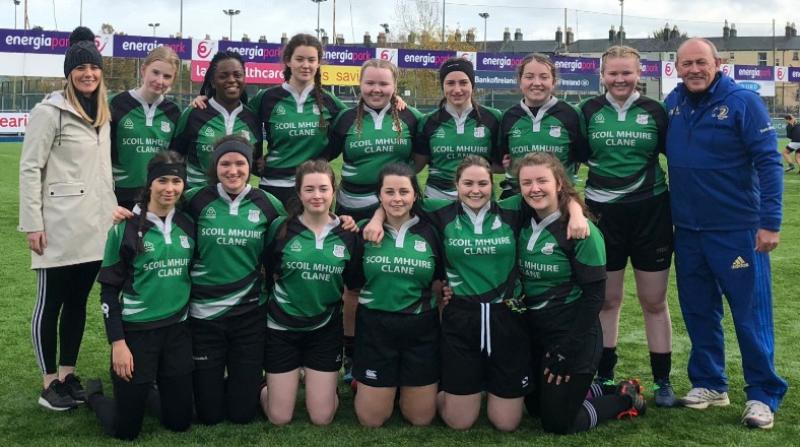 Scoil Mhuire, Clane competed in their 4th schools senior rugby 7's All Ireland final last last week, played in Donnybrook. They were 16 teams competing in the senior finals and Scoil Mhuire, Clane were Kildare's only secondary school to qualify.

Clane girls got off to a flying start winning well against Ard Scoil Mhuire, Limerick. Next up were Tullow and after a very tough encounter, the game finished in a draw.  The final group game was against Royal School, Armagh and Scoil Mhuire played very well to win.

Clane girls had to wait, what felt like eternity for the Tullow v Limerick game to finish to find out if they had qualified for the semi final of the Cup or the Plate.

Finally it was  announced the semi finalist and Scoil Mhuire Clane were through to the cup semi final for the first time and drawn against Sacred Heart Westport , who were reigning champions.

After a titanic battle Clane girls fell just short, but can be very proud after a brilliant effort to be in the top four of Rugby 7's Secondary Schools in Ireland.

Girls Rugby is alive and well in Clane