All palsy-walsy at County Board 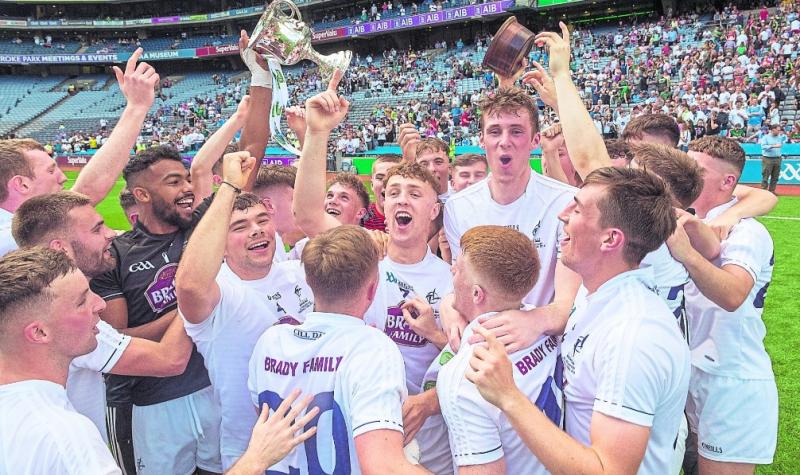 Ah you can't bate a bit of silverware to keep the natives happy and content in their boxes.

Add in some very encouraging news on the financial front and suddenly love is the air; past tiffs are a thing of the past; and everyone is suddenly all palsy-walsy and singing off the same hymn sheet. Well, as close as you can get.
On Tuesday evening last week at the Manguard Plus COE in Hawkfield the grassroots of Kildare GAA met for their September gathering.
On arrival one could not but be impressed at the array of silverware on display with the All Ireland and Leinster U20 trophies, the Christy Ring Cup, not forgetting the Leinster Junior Football Championship trophy.
Little or no controversy as delegates even sat on their hands when informed that the SFC winners of 2018 will have to play their Leinster Club opening round fixture seven days after the final.
But cast you mind back to the previous gathering of the same delegates when Chairman, Ger Donnelly, along with (some) members of the Board, were called a disaster and asked to step aside by Carbury delegate Dermot Reilly.
Harsh? Absolutely.
And I might add, totally out of order, but again, apart from one or two, delegates did what they usually do most of the time, kept dumb.
But on Tuesday of last week everything in the garden was rosy.
What with treasurer Alan Dunney giving a fiercely positive upbeat report of the finances (after the third quarter of the year granted) but when Mr Dunney uses the phrase “we are in a very good place” you can take it Kildare GAA are in a very good place, and that's for sure.
And to be fair to one and all the turn around on that front is nothing short of phenomenal and that is down primarily to the said Mr Dunney who has overseen a situation where Kildare could not write a cheque without it being counter signed by a Croke Park official to now showing fixtures that are extremely healthy; a situation that will be confirmed at end of year.
Padraig McManus, the man overseeing the redevelopment of St Conleth's Park was present and provided all with the up-do-date situation on the project.
And again, it has to be said, that that was very positive also, all being with a lot of fund raising to be done as he works in conjunction with Club Kildare to help get that project up and running.
As reported in the Leinster Leader two weeks ago, Chairman Ger Donnelly confirmed that it will be necessary to close St Conleth's Park for the duration of that redevelopment.
That will occur, but not finalised as of yet, after the completion of the 2019 Allianz Football and Hurling Leagues.
The plan is that the old stand at St Conleth's Park will be demolished starting around St Patrick's Day next year, which will also mean that apart from no club games being played from that date for approximately 12 months, Kildare games in the national leagues in 2020 will have to be played away, either in the opposition grounds or somewhere such as Portlaoise, all to be decided in a matter of weeks.
One of the main planks that will ensure the re-development will go ahead as planned is an increase in membership of Club Kildare.
Mr McManus informed those present in Hawkfield that membership of Club Kildare was down to 150 in recent times.
Due to initial work that figure has now increased to 240 and it is hoped to get it up to 300 in the next few weeks before building it up to 500 or more.
Mr McManus said the feed back he and his committee have received over the past few months has been very positive in this regard, adding he was more than hopeful that figure can be reached.
He also said they were looking at revamping the corporate side of membership of the body and hopefully will also be introducing family and juvenile membership but for the immediate future it is imperative the membership figures reaches 300 prior to a meeting with Croke Park when their (Kildare) plans will all be outlined, that to take place in a matter of weeks.
Ironically it was reported that just four clubs in the county, Naas, Moorefield and Sarsfields, along with Athy make up in excess of 90 percent of membership of Club Kildare while in the North of County there are as few as ten in total paid up members of Club Kildare
This is something that he, Mr McManus, and his committee are tackling at the moment and are confident of a big improvement.