A season to remember for Kilcullen's Barry Talt 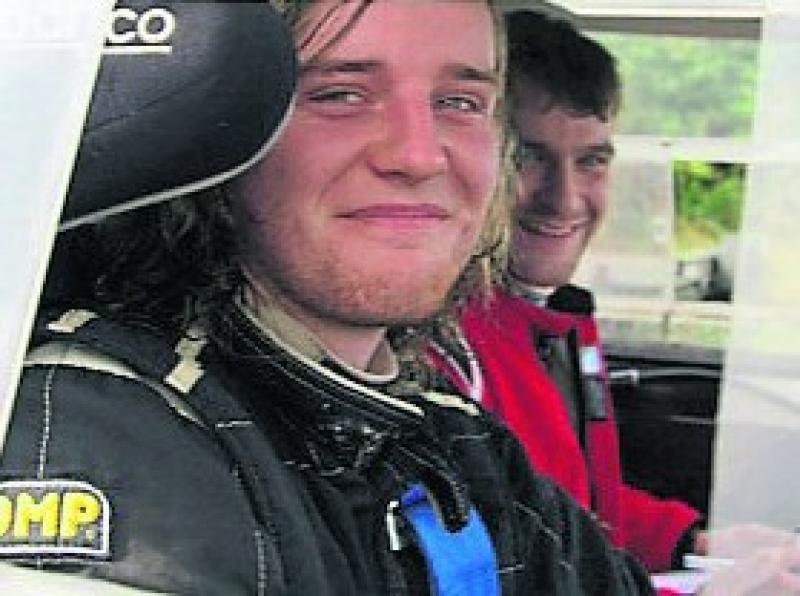 As some of you may know I do some rallying, writes Barry Talt (Kilcullen man). I am a navigator.
For people not accustomed to the sport, I basically shout upcoming corners to the driver who will hopefully listen, with the aim of getting through a stage as quickly and safely as humanly possible.
This year I made a come-back to the sport after a three-year lapse, with a lad named Michael Cunniffe. Michael is a Westmeath man, at the fine old age of 22 and like myself, lives for the sport that we do.
So far this year we have completed six rallies together, Cavan, Carlow, Laois, Donegal, Raven's Rock and Stonethrowers.
We have travelled from one end of the island to the other with our little white 1984 Peugeot 205 GTI named 'Betsie'. We run a very tight budget (and I mean tight!) and as both our fathers would say “we're a throwback to the good old days of Irish rallying.”
Our Betsie is nothing special by any means. The spec of the car is a 1600cc 8V engine on twin 45s producing 127bhp at the wheels, standard bottom end with a polished and ported head (done with a dremel by my father in our shed if my memory serves me correctly), a H pattern be3 gearbox and Bilstein suspension.
It was built by my father Henry Talt some 15+ years ago and later acquired by Michael and his father Aidan.
But what we do with all those 127 ponies is something not far short of being a spectacle. We constantly come up against cars with engines literally putting out 100+ bhp more than us that have been built by specialists, with sequential gearboxes and fancy three-way suspension. These gearboxes new are worth twice, if not more, than what our car is worth in total.
To put it in perspective, just last Sunday at the weekend we came second overall in the junior class. Coming within 13 seconds on a 10km stage of the class winning car.
A 200+bhp, sequential-
gearboxed monster of a car driven by one of the nicest and talented lads in the country at the Fanning Motor Factors Stonethrowers Rally. And if we were in the main field at Raven's Rock, our times would have landed us with a top 20 finish overall.
We have secured the Junior class in the 2018 Midlands East Rally Championship and are on route to take the South East Rally Championship also. We have beaten cars much faster and much much more expensive than ours.
The talent that Michael possesses is a gift. He can push a car to its limits without going over (so far anyway). And most importantly he can have the craic along the way.
Our season with Betsie has now come to an end. Her engine is tired, her gearbox knackered and everything in between a bit tired and worn. It's now time to roll her into the shed and look ahead to 2019.
Thank you to our sponsors CK Premier Construction Ltd 087 2168724 and H Talt Services Ltd, and our loyal supporters, namely Leah Moran, Colleen Talt and Dee Cunniffe, we literally couldn't have done it without you.
And on that note I would like to apologise to my father Henry, and Michael's father Aidan.
As some may remember, we took part in Donegal International Rally this year. We gained a late entry on the Thursday evening before the rally, and against both our fathers' (probably logical and sensible) wishes me and Michael insisted on going.
The car was brought to my house on the Friday afternoon, when a spare gearbox was installed, new brake pads, rotors and a calliper installed, along with a wheel bearing or two replaced.
For the stress we caused you both that weekend, we are sorry.