Green light for St Conleth's Park; decisions now on next step plus who will lead Kildare football and hurlers in the new season 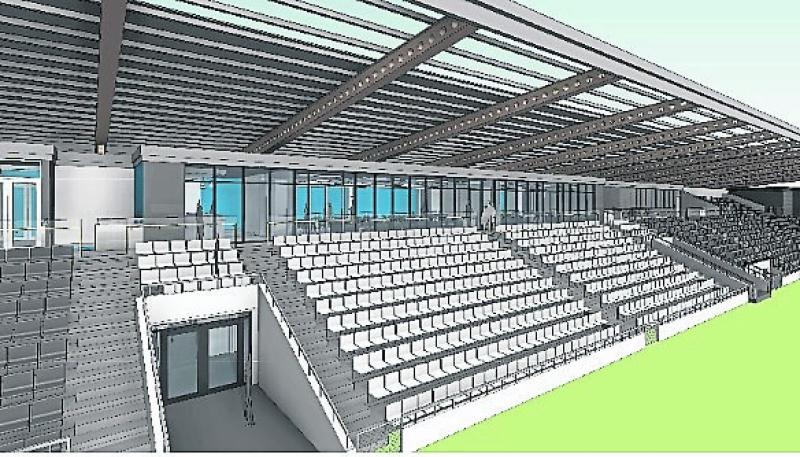 Drawings of the new proposed stand at St Conleth's Park

With the welcome news last week that Kildare Co. Council has given Kildare GAA the green light for the €6.5 million redevelopment of St Conleth's Park, the spotlight now turns to the GAA hierarchy and how they propose to proceed.
A start-up date for the commencement of work, possibly early March 2019, will mean firm decisions as to where Kildare will play their AFL and AHL home games, along with all the other inter-county games in either 2019 or 2020,will need to be made and made urgently.
Of course these are not the only big decisions due to be made by Kildare Co. Board as football boss, Cian O'Neill's three year term is now up, while hurling boss, Joe Quaid, has said he will not be seeking an extension following the completion of his three year term.

Ironically, Cian O'Neill was present at last week's senior football championship games at St Conleth's Park, giving rise that his re-appointment as football boss is imminent and with the next meeting of Kildare Co. Board due on Tuesday September 4, time is of the essence.

It will be another four weeks (since the date the approval was granted) before full approval is signed off on the redevelopment of St Conleth's as objectors have that timeline if they wish to revisit the planning permission, but only those who had originally raised concerns can do so again.
According to Padraig McManus who is overseeing the entire redevelopment, the next step, once planning is fully confirmed, will be the completion of detail design and the tender process, which should be completed within 4-6 months.
Before that, however, Kildare GAA Co. Board will have to make some hard decisions on exactly how they wish to proceed.
It is the view of Mr McManus that St Conleth's Park will have to be out of commission for up to 12 months which will mean Kildare will have to play all their Allianz Football and hurling League games away from home.
“I don't really see how it can be done any other way” Mr McManus told the Leinster Leader last week; adding that “while some are of the opinion that games can continued to be played for some time during the reconstruction, I don't believe that is the way forward; a complete shut down will facilitate the completion of the project, hopefully inside the 12 month period.”
With the new stand overshadowing the pitch up to some 20m, the playing surface will have to be entirely drained and the pitch re-sown; that in itself could take longer than actually the construction of the new stand.
Initially it was intimated that work would begin in early 2019, whether that is before the start of the Allianz Leagues or after (around end of March) will also have to be decided but one way or another one season of playing away games is definitely on the cards. It would seem that the only decision that has to be made is whether it will be the start of the 2019 League or the start of the 2020 league, while all club games will also be out of bounds during that period.
On the face of it, a 12 month shut down seems very little inconvenience for what will, hopefully, be practically a brand new stadium; new stand with dressing rooms, meeting rooms, new modern entrance and with floodlights, we can look forward to playing League games on Saturday evenings and what a boost that would be not just for the GAA family as a whole but for the town of Newbridge and indeed the county as a whole.
When questioned about funding, Mr McManus confirmed that come September a new fund raising drive will swing into top gear.
“We have been doing some work in this regard and so far it is very encouraging; we now need to get more businesses on board, along with a big increase in Club Kildare membership.
“What we really need is approximately an additional 250 new members and if we can get that and all the other various state grants, Croke Park and Leinster Council, grants, along of course with a major bank loan, we can bring this project to fruition” said a very confident Mr McManus.