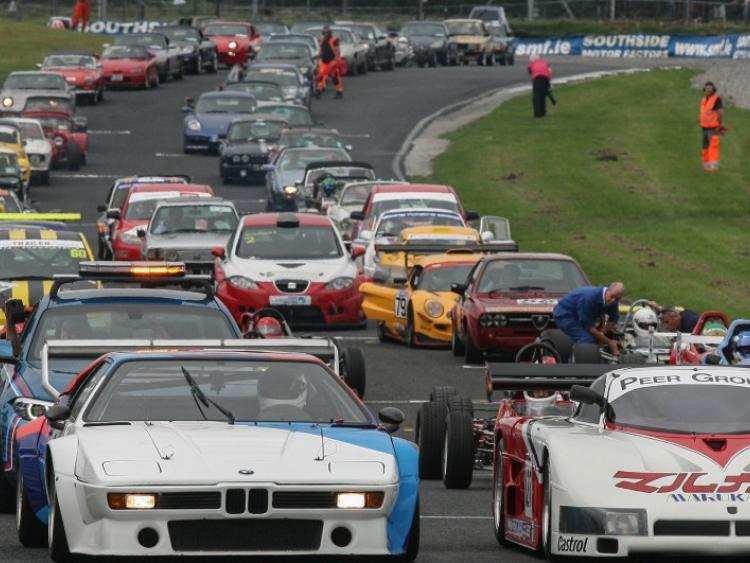 The County Kildare track attracted its biggest crowd for many years with a host of familiar faces from the circuits' history on hand to celebrate the occasion and take in the unique atmosphere of the now annual Historic Racing Festival.

The 50th celebrations were also a poignant occasion as the Birrane family, along with Irish Motorsport, remembered circuit owner Martin Birrane who passed away just weeks before the event. In memory of Mr. Birrane the Sunday afternoon parade laps were led by three Le Mans cars from his collection, which normally reside in the circuits' Motorsport Museum. The Cars, a Ford C100, Spice Group C2 car and Martin's Le Mans class winning BMW M1, made an impressive sight as they headed a huge assortment of competition machines from various points in the history of Mondello Park.

The Derek Bell Trophy was the main attraction for many fans as it brought back to the track the wonderful sight and sound of Formula 5000, Formula 1 and Formula Atlantic machinery, for the first time since the circuits' fortieth birthday.

Fittingly a large portion of the field was made up of Lola cars, recognising the fact that Martin Birrane himself drove a number of Lola cars during his long driving career, and also owned the renowned Race Car manufacturer from 1998 on-wards.

The feature Derek Bell Trophy races were won convincingly by International Historic Single Seater Racing star, Michael Lyons, who battled all weekend with local hero Tommy Byrne, as he made a comeback to racing at Mondello Park following a 37 year break.

Byrne, who was driving an ex James Hunt Hesketh F1 car and was the focus of much of the crowds attention throughout the event, took pole position for race one. The Dundalk driver then led Lyons, driving a Lola T400, for the opening two laps of race one before the F5000 machine took over at the front. Lyons eventually won by just under six seconds from Byrne. With the Irish driver not qualifying for the Derek Bell Trophy, second place officially went to Dan Daly from Dunboyne while third was taken by French visitor Alain Girardet.

Race two started with Lyons on pole position and he led from lights to flag. Byrne again battled hard in the Hesketh but had to settle for second, admitting on the podium to being slightly ring rusty as well as saying that his tyres were shot by the end of race two. Again Daly gave the local crowd something to cheer about, with second place, while Girardet was third once more.

A supporting cast led by full grids of cars from the local HRCA Historic class and Future Classics, thrilled the huge crowd, while Classic Bike Racing Ireland added something different with a pair of Classic Motorcycle races. A single race for older Pre '55 cars, parade laps, displays of classic cars and a great assortment of traders, kept the event visitors entertained, at what is fast becoming the biggest and most important event on the Mondello Park Car Racing calendar.